How did it get so bad?

Ostrich policy and bad science. In Bihar, embankments built by government to prevent floods have been counter-productive

How did it get so bad? 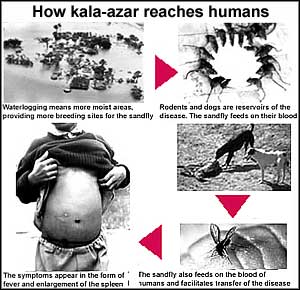 The story began over a century ago. Between 1862 and 1872, 'Burdwan' fever was reported in what is now West Bengal, and this was most likely the first report of kala-azar. Early epidemics were often confused with malaria. Only in 1903 did W B Leishman and C H Donovan trace the parasite, hence the name Leishmania donovani . Kala-azar hit the Garo Hills of Assam in 1863, and subsequent epidemics hit Assam from 1890 to 1900. Bihar's first case was reported in 1882, and there were severe epidemics between 1933 and 1937. Although most cases came from northern Bihar, other areas such as Assam, Bengal, Uttar Pradesh, and Tamil Nadu also suffered from kala-azar outbreaks.

By the end of the 1950s, most epidemics were thought to be over following the spraying of ddt under nmep . According to C P Thakur, there were three reasons for the decline of kala-azar in the 1950s:

l ddt sprays led to a decline in populations of the sandfly;

l Use of chemical drugs; and

The inference drawn: ddt can only be considered a short-term solution to the problem. Though the number of cases declined when ddt was sprayed, kala-azar cropped up again when the spray was discontinued. One reason for this is the occurrence of post kala-azar dermal leishmaniasis ( pkdl ), a relapse situation in which papules and nodules containing a high percentage of parasites appears on the skin. These serve as reservoirs of infection that can easily be picked up by sandflies. As pkdl occurs one to three years after the apparent cure of kala-azar, the rise in vector density is dangerous because sandflies have a source of infection from which they can spread the disease. This explains why spraying of ddt has failed to eradicate kala-azar (see graph: History of kala-azar in Bihar ). Finding and treating cases of pkdl is integral for eradicating the reservoir of infection.

In 1985, the Union government constituted an expert committee on kala-azar. Among other things, the committee "strongly recommended that a national kala-azar control programme should be launched immediately... failing which, besides the loss of human lives during epidemics, the problem of kala-azar in India may attain gigantic proportions and large amounts of money will be required for its control. It may even go beyond our resources." But the warning went unheeded.


With a large number of big and small rivers running through northern Bihar, floods and waterlogging are annual phenomena in the state, especially in the northern areas. Since the 1950s, succeeding state governments began building embankments along rivers to check flooding. Today, after spending Rs 764 crore on embankments in Bihar, the area of flood-prone land in the state has actually increased. This trend was first documented by Anil Agarwal and Sunita Narain in the State of India's Environment, A Citizen's Report, Floods, Flood Plains and Environmental Myths published by the Centre for Science and Environment in 1991. Along with this has increased the incidence of kala-azar. People from several walks of life say there is a direct link between the two that has not been explored. If that is true, then government policies and the money it has spent have not only failed to check flooding but have actually contributed to death and disease.

Waterlogged lands lead to a proliferation of disease vectors such as mosquitoes and sandflies. "After the flood and waterlogging in our area, more people die due to diseases carried by the sandfly , " says Sirtia Devi of Sirgati village. "Constructing a large number of embankments is total mismanagement of water," says Nalini Kant, who works with the Indo-German Social Service Society in Patna. He has recently studied traditional irrigation systems in Madhubani district of northern Bihar. The unpublished study points out that there are 20,000 ponds in the district that formerly irrigated 45,000 hectares of land. As water management was taken up by the government, these structures, which were earlier managed by communities, fell into neglect. "Today these ponds are the sources of diseases like cholera, malaria and kala-azar," says Kant.

"There is definitely a link between waterlogging and kala-azar," says Mishra. But it is yet to be explored, he adds. "Flood or waterlogging give rise to humidity which is important for the growth of sandfly," says Kamal Kishore, assistant director of Rajendra Memorial Research Institute of Medical Sciences ( rmrims ) in Patna . Embankments, irrigation canals, roads and railways built in the plains north of the Ganga often run against the grain of natural drains. The outcome is severe drainage congestion and waterlogging. Land that earlier would have been flooded only for a week or two is now inundated for months due to the embankments.

In a paper entitled Patna, Delhi and Environmental Activism: Institutional Forces Behind Water Conflict in Bihar , Dipak Gyawali of the Royal Nepal Academy of Science and Technology traces the mismanagement of rivers in northern Bihar. He points out that the rivers coming from Nepal carry great quantities of sediment. Due to this the rivers change courses periodically. Also, the flood plains have very high groundwater tables. These two factors contribute to increased waterlogging and promote an increase in the breeding areas of the sandfly. Gyawali questions the efficacy of embankment technology in this type of hydro-ecological region.

The government's policy of building embankments needs to be reviewed, and the link between waterlogging and incidence of kala-azar should be studied in detail. The time for this is now. Any delay would cost the people dearly, especially with the best drugs in the market slowly losing their efficacy.


While considering the strategy to deal with kala-azar, it has to be remembered that the disease affects the poorest of the poor (see box: Inheritance of the meek ). It is essential to find non-chemical vector control measures to control kala-azar, such as environmental management methods. So far, emphasis has been limited to ddt and drugs. What are the lessons to be learnt from the history of epidemics in this century.

As vectors gain resistance to ddt , the only alternative is to switch to other compounds such as organophosphates, which are more expensive to man ufacture and need to be applied more frequently. Switching from ddt to malathion, for example, would result in a five-fold increase in costs. And what will happen when the sandfly develops resistance to stronger insecticides.

In Chennai environmental management has helped to reduce the incidence of kala-azar. Between 1945 and 1952, a total of 17,932 cases were reported, and 1,264 cases between 1958 and 1961. In the past decade, the number has fallen to 11 cases. Kalra explains that the declining trend after 1961 is due to improved housing facilities and better conditions in cattlesheds, as well as due to a cleaner environment. The breeding areas of sandflies were reduced, thereby decreasing the means of its transmission. These changes, together with improved health facilities and access to medical care, were the key to Chennai's control of kala-azar in the absence of ddt .

It has been over a century now since kala-azar was first detected in India. How much longer will it continue to ravage the land? Unless authorities get their act together now and structure a multi-faceted national programme, the answer to this question could certainly be a hopeless one.