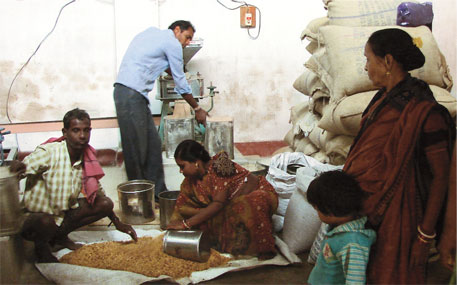 The dominating noise of the grinder and the mixer speaks loudly of a new skill that the women of Binka village have mastered. The house, centre of all activity, is the busiest in this sleepy village. The women are making a nutrition mix for 270 anganwadi centres in two blocks of Odisha’s Subarnapur district.

Famed for their weaving skills, the women, grouped under the Kasturba Mahila self-help group (SHG), work tirelessly for eight hours a day to grind rice, wheat and peanuts. The mix is sorted in two-kg packs for children between six months and three years, and for pregnant and lactating women. The packets are then sent to the anganwadi centre, every fortnight. Producing 27,000 kg of the mix in a month, the women achieve a monthly turnover of Rs 5.77 lakh. At present, the workers earn more than Rs 3,000 in a month. Within about four months, the group will repay its Rs 2 lakh loan for the machine. “After that, it is going to be a windfall,” says Nirupama Meher, the group’s president.

The women of Binka smelt this lucrative livelihood opportunity in April 2011 when the state government allowed local procurement of lentils, vegetables and nutrition mix for anganwadis. Under the Central government’s Integrated Child Development Scheme (ICDS), anganwadis provide morning snacks and hot lunch to children between three and six years. Besides, nutrition mix is given to children between six months and three years, and to pregnant and lactating women.

For Odisha’s 68,729 anganwadis and mini-anganwadis rice and wheat were earlier procured from public distribution centres, and lentils and other ration from private contractors. One production centre in the state supplied nutrition mix.

Government order now mandates its anganwadis to procure ration, vegetables and eggs from village sources. Local SHGs get support to set up cottage industry to make nutrition mix. The anganwadis feed 1.7 million children between three and six years and 2.7 million children, and pregnant and lactating women in Odisha.

Way back in 2005, the women of Binka had formed an SHG to sell sarees in urban areas. “But business was not good,” says Meher. In June last year, district social welfare officials offered them help in setting up the nutrition mix plant. “The women started in one block. Within months they had taken the responsibility to supply the mix to another block,” says Bernadetta Barla, district social welfare officer.

In Nandanmal village, Khristavi Pujari, who has been managing the village’s anganwadi for the past 15 years, explains how decentralised procurement is boosting local economy. Anganwadis now make purchases from the village’s ration shop instead of government’s shops located far away. “This has doubled the ration shop’s monthly income,” she says. The monthly requirement of 50 kg of vegetables has done wonders. “Villagers having kitchen gardens now earn,” she says. The Rs 2,500 anganwadis spend monthly on vegetables goes in the resident’s pockets as extra earning.

Barla points to another interesting spinoff. “SHGs have started community vegetable farming to meet this demand,” she says. Of the district’s 5,400 SHGs, around two-thirds have taken up vegetable farming.

The state government’s order followed a major scandal exposed in February last year. The state vigilance department found that under the Centralised procurement programme, the contractors had siphoned off at least Rs 100 crore in just four districts in 2010 by supplying poor quality lentils. The state women and child development minister Pramila Mallick had to resign.

Steering the programme out of the scandal, Arti Ahuja, secretary to the state women and child development department, gave procurement mechanism a makeover. Fixing ceiling price for any food was done away with and local anganwadis got the freedom to procure locally available lentils and vegetables, but without changing the prescribed cost and nutrition level.

The menu was changed to suit the new system. Unlike the earlier staple meal of rice and lentil, the new menu has a variety of dishes that use vegetables and eggs. “This has benefited local producers,” says Ahuja. In this fiscal alone the programme will pump in Rs 214 crore worth of business to local producers and shops. Rajkishore Mishra, a social scientist who has studied the impact of the decentralisation in the state, says, “This economic interest has made villagers stakeholders in ICDS.”

Vigilance committees of residents monitor the quality of food and check corruption. A mother’s panel ensures that children get the right amount of food and nutrition.

In October 2004, the Supreme Court prohibited involvement of contractors for procurement of food for anganwadis. It ordered ICDS funds to be spent on village communities and SHGs buying grains and preparing meals.

India has 1.7 million anganwadis feeding more than 36 million children below the age of three. “If the decentralised model is adopted across the country, at least Rs 6,000 crore could be passed on to the communities through local procurement,” says Biraj Patnaik, principal advisor to the commissioners of the apex court. ICDS’ nutrition programme has an annual Central budget of Rs 5,000 crore. If the Mid-day Meal Scheme is also decentralised, the money pumped into the rural economy can increase threefold.

“But many states violate the court order and still engage private contractors to procure foodgrains. This forces the children to eat unpalatable stuff,” says N C Saxena, commissioner to the apex court.

Decentralised food procurement was started in Chhattisgarh three years ago. Encouraged, Rajasthan has piloted it. But in states like Uttar Pradesh and Karnataka, which still use private contractors to procure foodgrains, corruption is rampant.

“A large part of the money is squandered away in lucrative contracts. They either do not supply the supplementary nutrition, or supply sub-standard food that has to be used as cattle feed,” says Patnaik.

In India, procurement is majorly from a few states, and from bigger farmers within them, says Radhika Lal of UNDP’s International Policy Centre for Inclusive Growth in Brazil. The South American nation has reduced the scale of procurement making the programme more inclusive. It ensures a link between local production and consumption, she adds.

At present, India has very few programmes that include local economy or production as an objective. The few states exemplifying decentralised procurement should push the Centre to adopt more such programmes.