An encounter with industry's sugar-free politics 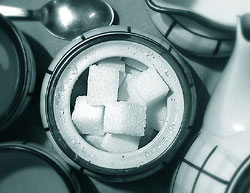 He had read my article on artificial sweeteners (see 'Sweetly worked' Down To Earth, Vol 13, No 11, October 31, 2004). He wanted to show me documents to prove aspartame was safe, and suggested I meet him and Gaurav Chaudhry, market development manager, Delhi over tea. Sasi Kumar was aware of Down To Earth . He said the magazine's editor would really like their company (Monsanto); after all, it was trying to reduce pesticide use through genetically modified crops.

After calling me, he explained, he had felt I was unbiased: the article had just reported available facts. The problem was, they felt, I had not seen the right documents. Sasi Kumar and Choudhry discussed us-based n ational Institutes of Health data on health complaints related to aspartame, and how it was impossible to actually link the use of the chemical to the complaints. They said that when aspartame approval was on the anvil, the Indian government had asked other governments on the status of acceptance; the latter had replied: they had approved the chemical based on safety data.

The conversation turned to Acceptable Daily Intake for aspartame: it was impossible for anyone to consume much of the sweetener. Aspartame comprised only amino acids, which are present in all food; they pulled out a brochure to show the quantity of amino acids in one sachet of aspartame was equivalent to that present in three bananas. I commented it would be difficult for a person to eat three bananas, but very easy to drink one cup of tea. The two gentlemen smiled.

Sasi Kumar asked me: how was it that aspartame had been given us-based Food and Drug Administration approval if it was so unsafe? No government could let its people die. It was being sold for more than 20 years; sales were going up by 15 per cent per annum; this would not have been the case if it were indeed a bad product, for then, consumers wouldn't pay up.

Chaudhry spoke of how sweeteners were just a choice; there was no question of taking over the sugar market. Good taste was a consumers' right; it was sad aspartame carried so much "baggage". (note: packets of Equal mention it is not safe for children or people with phenylketonuria, a genetic disorder. This suggests the product is not safe.) Sasi Kumar said India needed artificial sweeteners because of a high rate of diabetes. When I asked why people could not use herbal alternatives such as Stevia, they replied Stevia was a bad product, banned in the us. Also, the process of extracting the active ingredient from the herb was very polluting. Chaudhry said sugar extraction was equally polluting.

They felt a lobby was behind the attempt to prove aspartame was bad: after all, only two people kept coming up with bad things every six months. This lobby included saccharin, generic aspartame and sugar manufacturers. The two gentlemen were clearly worried about lobbies, and bad press. Sales were rising, but weren't so good in India though potential here was huge.

What I found surprising was that these two spoke only about aspartame, their company's off-patent product. So I asked them about Neotame (the company's trying to introduce it in India). Sasi Kumar rued that Neotame would not enter the market in the next three years because the approval process was too slow. Was there a way, he asked in a pained voice, to tell people sweeteners were safe? I suggested a letter to the editor or an opinion piece. He was not very happy: if he wrote, people would not take them seriously. Could he suggest some expert to write an opinion piece? I replied it would be carried only if we got a counter-opinion. They asked if Down To Earth could get together a panel of scientists and NutraSweet could make a presentation on safety (provided head office approved). Finally, they agreed to write a letter; meanwhile, they said they should be contacted if we carried write-ups on sweeteners.

Passing this message seemed the major objective behind the two hours I spent with the two gentlemen. The tea was very good.