How to cure corruption in healthcare

Rx: Only an effective governing body, which includes medical and non-medical members, can stop the culture of kickbacks

How to cure corruption in healthcare 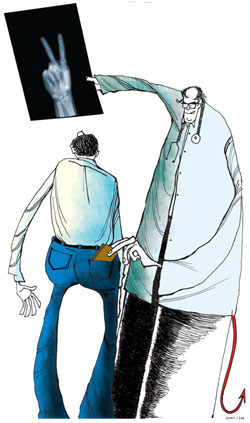 Corruption in the healthcare sector is old news. Almost everybody in the country has been a victim of some form of graft or malpractice—be it inflated bills, wrong diagnosis, or substandard treatment. So it comes as little surprise when a foreigner who has worked in the Indian medical system says, “kickbacks and bribes oil every part of the Indian healthcare machinery”.

Yet the observations made by Australian district medical officer David Berger, who has written an article in the British Medical Journal on his experience in working with an Indian hospital, has once again sparked a debate—both in the public and political domain—on how to fix the rampant corruption in the healthcare system.

The solutions are obvious, suggests SamiranNundy, a senior doctor with Sir Ganga Ram Hospital in Delhi. “There is a need for collective will and it has to be backed with transparency in the system,” he says. Policy makers have never addressed the issue of corruption in totality, says Nundy. Instead, every time a scam is exposed, the government announces new steps, which seldom get implemented. A good example of the lack of collective will in reforming institutions is the Medical Council of India (MCI), which was embroiled in a scam in 2010. The statutory body was set up to “establish and maintain high standards of medical education and recognition of medical qualifications in India”. But its former president Ketan Desai was arrested for accepting bribe of Rs 2 crore from GyanSagar Medical College in Patiala. As a knee-jerk reaction, the government dissolved the body while announcing in Parliament that it will bring in reforms. But in 2013, the government restored MCI without any reforms. Like in the MCI, corruption cases have surfaced in almost every government health scheme (see ‘Graft files’).

Ashutosh Mishra, executive director of the India chapter of Transparency International, thinks corruption in healthcare is thriving because of lack of transparency. In a survey conducted in 2006, Transparency International found that every year people from the below poverty line category in India shell out over Rs 10,000 crore as bribe for basic needs, including healthcare. The amount that is being wasted because of corruption is close to a third of what the government plans to spend in the sector (Rs 33,725 crore) in 2014-15. “At any standard, there has been no improvement since then,” he adds.

Abhijit More, an activist with non-profit SATHI that works on rural health in Maharashtra and Madhya Pradesh, echoes Mishra’s sentiment. He says the government should make it mandatory for doctors to write down detailed prescriptions with the diagnosis and the medicines prescribed. “Most corrupt doctors just write the medicines which makes it difficult to know what disease the patient is suffering from.”

Talking about lack of transparency, T Sunderaraman, joint convener of public health advocacy group Jan SwasthyaAbhiyan (JSA), says government health insurance scheme RashtriyaSwasthyaBimaYojna is a major source of corruption and needs redesigning. “Under the scheme, the beneficiaries should always be alerted about how much they are paying for treatment. For instance, smart cards of the Delhi Metro tell users how much money has been deducted. The beneficiaries can then question if they are overcharged,” he says.

The process of individual corruption begins early, right at the start in medical colleges, with capitation fees for entry to the MBBS course in many private substandard medical colleges, writes Nundy in an editorial in Current Medicine Research and Practice. The same observation is echoed by JasodharaDasgupta, coordinator of Sahyog, a non-profit working on women empowerment and health issues. These experts believe corruption in medical education is the reason behind the worsening situation in healthcare.

India is the only country where sale of medical seats by private medical colleges is part of official policy. It means the ability to pay counts more than merit. Apart from the huge capitation fee, the process of walk-in type of admissions is also problematic. In such cases, even those who lack interest in the profession get admission. And the patients bear the brunt of these lapses as they get treatment from unskilled doctors. To make matters worse, many such doctors unscrupulously indulge in unethical practices to make quick money.

The government, along with MCI, did try to ensure a minimum level of competence by mooting a National Eligibility-cum-Entrance Test as qualifying requirement for all students. But the idea was opposed by medical colleges and they got a stay from the Supreme Court in May 2013.

Private medical colleges are also mushrooming by the dozen and the government has little regulation in this regard. According to information received from MCI, there are 27 medical universities in India. Of these, 14 are in the private sector. Till June 30, there were 387 medical colleges, including six new AIIMS, in the country. Of these, 205 colleges are run by private players, informs Union health minister Harsh Vardhan, who admits to the problems in the education sector. “We are looking into how to improve medical education in the country and MCI’s reform is under serious consideration,” he told Down To Earth. On the question of making donations for medical seats illegal, he says, “We will see what is possible through law.”

Sunderaraman says that corruption in medical education can be easily controlled by auditing and keeping records. But it will require political will, he adds.

The other major issue is that the law is silent over the kickback culture, points out More. JSA has written a letter to the health ministry demanding that kickbacks be made illegal and seen as conflict of interest. Sundraraman says the government should include this in the existing Clinical Establishments (Registration and Regulation) Act, 2010 (CEA). The Act is the only effective initiative taken by the government so far to check malpractices. It calls for registration and regulation of all clinical establishments and attempts to ensure provision of minimum standard facilities in all kinds of medical establishments, including public and private ones, and even small clinics.

Sunderaraman says that the situation is so bad that people do not even believe accepting kickbacks is wrong. The new government recently said it is committed to the idea of health for all. The health minister on July 22 told Parliamment that his ministry is drawing up a panel of reputed medical practitioners and consumer law experts to suggest measures for introducing greater transparency in medical practices.

China, which is facing similar issues, has recently taken steps to tackle systemic kickbacks in the healthcare sector. In December 2013, China’s National Health and Family Planning Commission introduced new regulations for hospitals, physicians and medical product manufacturers. The country prohibited doctors from participating in product promotional activities or illegal disclosure of patient data. It also banned accepting kickbacks and commission, and accepting inducements from patients or their families. The guidelines prescribe prohibitive punishment for defaulters.

The need for an effective central body to govern the sector is more real than ever today because of rapid privatisation in the sector. According to the National Health Profile, 2013, the money paid by patients to private hospitals for treatment accounted for 71.62 per cent of the total fund inflow in the healthcare sector in 2008-09. The share is expected to increase to 81 per cent by 2015. Thus, experts say, effective reforms in the MCI are important to check malpractices in the health sector. One of the major reforms suggested by experts is to include non-medical members in MCI, which is common in Western countries. “In the UK, the General Medical Council is very tough on corrupt doctors. Its members include journalists, social workers and other professionals, unlike MCI whose members are only doctors and they want to protect themselves,” says Nundy. The step, he says, is essential to have an effective redressal system. There should be transparency in the selection to repose people’s faith in the healthcare system, says More.

Experts say it is unfortunate that the country, whose researchers are playing a pivotal role in medical advances globally, is still struggling with corruption, even in basic healthcare systems.