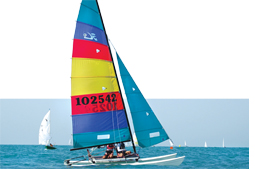 "Don't remember if I mentioned it, old chap, but I am in the market for a new hobie." "Oh yeah? What happened to your old cat?" "I got rid of it. Too old and sluggish. I am on the lookout for a new hobie, fancy getting myself a tiger."

Appalled at the spelling errors? Horrified at what seems to be yet another instance of cruelty to animals? Rest assured. The spelling is spot on. And no animals were injured in the making of this article.

Hobies are small light-weight catamarans made of fibre-glass, named after their creator, Hubert ('Hobie') Alter, a nautical designer from California. 'Cat' is short for catamaran, and a 'tiger', in this instance, is a popular model of the hobie catamaran.
A Tamil fisherman is said to have invented a type of boat consisting of two hulls joined by a frame in the fifth century.The original Tamil word, kettumaram, is a portmanteau of two words kettu (tied) and maram (wood). The anglicised version of the word, catamaran, was introduced into the lexicon by the English adventurer William Dampier in the late 17th century. A century later, English visitors to the Polynesian islands applied the term, catamaran, to paddle boats made out of two widely separated logs, used by Polynesian natives to get from one island to another.

Two centuries later, the American naval architect-engineer Nathanael Herreshoff took to designing his own version of the catamaran. The speed and stability of these catamarans soon made them popular pleasure craft, with their popularity initially taking off in Europe, and soon thereafter in America, eventually extending to South Africa and Australia. Modern catamarans are usually made of fibre-glass.

Small vessels, like the hobie are used for both racing and pleasure sailing. Designed to cater to fun and adventure, they have a good following. In the West, catamarans signify the recreational preferences of the upwardly mobile middle and upper classes.

But to the people of coastal India, it brings to mind an altogether different picture fishermen setting out to sea in traditional wooden boats in search of their catch for the day. Other than that, use of these crafts in the country is limited to a sprinkling of bigger models used for ferrying tourists in Goa, Mumbai and Lakhshadweep. They serve as water taxis in the backwaters of Kerala.
The most popular type of catamaran used for recreation is the beach cat. They are easily launched from the beach on to the waves for sailing and they can be beached right back when people are done with sailing for the day.

Popular small racing catamarans and beach cats start at 14 feet and go up to 21 feet in length. They can be incredibly light at as little as 75 kg, making the weight of the crew crucial to the boat's performance. Apart from the popular hobie models, there is the prindle, the topcat, nacra, dart, tornado and the inflatable ducky among the various designs in the market for a catamaran.

For India, encouraging newer trends and forms of recreational sailing has multi-dimensional benefits. It could revive the boating industry and give it greater economic stability. For now, we have traditional boats at one end of the income spectrum, and motorised yachts, owned by the rich, at the other. There is precious little in between, even though slicker, cheaper, racier, more adventurous, affordable, fuel-free, internationally acclaimed ecological options like beach cats do exist.