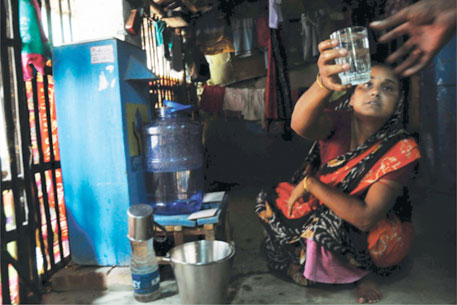 Alimunnasa, a housewife in her 40s, remembers to keep two bottles of filtered water ready when her husband Baburali Mollah steps out on his driver’s duty. Baburali would earlier be plagued by stomach upsets as he would drink from various sources, including roadside eateries and public water taps. In September 2011, a non-profit installed a bio-sand filter in his two-room hutment in Baduria block of North 24 Parganas district of West Bengal. Since then, the Mollahs say, stomach problems have become infrequent. Water tastes good and light too.

In neighbouring Malayapur village, Masura Mondal’s family of eight uses water purified by the sprightly blue filter for cooking as well. “My two grandchildren used to drink boiled water but would still suffer from diarrhoea and other stomach ailments. They have no such complaints now,” says Masura. The family received bio-sand filter for a nominal Rs 300 from the non-profit. Masura’s son Jony informs that water from hand pumps in the region has high iron content. The purifier filters the iron out, and hence tastes good. One has to otherwise install a 300-metre-deep tube well to get water that does not taste salty or have high iron content. Its installation costs at least Rs 25,000. An added advantage of bio-sand filter is it requires little maintenance and no electricity.

The filter was introduced in these villages by Mission of Mercy and Assembly of God Church as a part of their pilot project. Promoted by Canadian non-profit Center for Affordable Water and Sanitation Technology (CAWST) the non-profit has installed 1,800 bio-sand filters in the past two years in several villages of West Bengal and Jharkhand where people do not have access to safe drinking water. “The project was conceived as part of the Millennium Development Goals to reduce child and maternal mortality among others,” says J S K Rao, director of the non-profit’s resource management. According to the World Bank, 386,600 children in India die every year due to diarrhoeal diseases, 94 per cent of which are preventable by increasing the availability of clean water and improving sanitation and hygiene standards. WHO estimates that 97 million Indians live without access to safe drinking water. “Given the reality that 90 per cent of all illnesses are caused by contaminated water,” Rao says, “bio-sand filter is an affordable and easy-to-use household treatment solution that lasts up to 25 years.”

The filter can efficiently treat bacteria, viruses, turbidity due to suspended solids, iron and most importantly arsenic, which is a major health hazard in eastern India. This is surprising because the technology is simple and has no fancy elements built into it (see ‘How bio-sand filter works’). WHO affirms the efficacy of the technology. Slow sand filtration is not only the cheapest and simplest but also the most efficient method of water treatment. It removes bacteria from water far more effectively than rapid filtration. Besides, bio-sand filter can be manufactured by using locally available materials and skills in developing countries.

Taking the initiative forward, Mission of Mercy plans to introduce a variant of the bio-sand filter, Kanchan, which can also remove arsenic. Research by the School of Environmental studies at Jadavpur University, Kolkata, suggests that more than 500 million people living in the Ganga-Meghna-Brahmaputra plains of West Bengal, Jharkhand, Bihar and Uttar Pradesh, among other Indian states, may be at risk from arsenic contaminated groundwater. Exposure to arsenic can cause abortion, still birth, atrophy of muscles and skin lesions that often lead to cancer, to name a few.

Kanchan filter is the regular bio-sand filter, with the only addition of a layer of rusted nail in the diffuser basin. The rust rapidly absorbs arsenic from water and flakes off the nails, which is then trapped by the sand layer. Field trials in Nepal by researchers of Massachusetts Institute of Technology and Stanford University in the US show its treatment efficiency is 85-95 per cent.

This simple intervention, which costs Rs 4,000, stands in sharp contrast with an experiment by the West Bengal government. Between 1998 and 2006, the government introduced 300 arsenic treatment plants, each costing about Rs 1.5 lakh. The plants gave way within months due to lack of maintenance.

“Most commercial purifiers remove only bacteria but make tall claims of removing everything, including arsenic,” says Dipankar Chakraborti, expert on arsenic contamination. He recounts an incident when a salesperson of Eureka Forbes, a popular water purifier manufacturer, knocked on his door. Chakraborti asked if the purifier can remove arsenic from water. The salesperson, while pushing the product, elatedly replied: “For sure. We had our purifier tested by Dipankar Chakraborti from Jadavpur University.” A good salesperson can sell a refrigerator to an Eskimo, quips Chakraborti who heads School of Environmental Studies at the university. Kanchan filter is a low-cost solution to arsenic contamination, he adds.

The only available options in the market that can remove arsenic and other impurities like pesticides and fluorides are reverse osmosis (RO) filters, which cost upwards of Rs 12,000. Kanchan cannot remove dissolved chemicals like pesticides. “Nothing other than RO filters can. But then, RO water is like distilled water, devoid of all minerals. Drinking such water drains the body of essential minerals and is unhealthy for long-term use,” says Chakraborti.

A bio-sand filter is also cost-effective when compared with low-cost non-electric filters available in the market. Take for example Unilever’s Pureit. It uses a combination of microfibre mesh, carbon filter and chlorine release to purify water and costs about Rs 2,000. However, its filter kit needs to be replaced after purifying every 1,500 litres of water. Assuming that a family consumes 20 litres of water daily, the cost of kits adds up to over Rs 2,000 a year. Besides, unlike Kanchan filter, Pureit cannot remove arsenic. Despite these shortcomings, the packaged water and purifier appliance market in the country is worth Rs 4,500 crore and is growing by leaps and bounds.

Away from glitzy commercials, the demand for bio-sand filters is also picking up. So far, about 430,000 bio-sand filters have been installed in over 100 countries. In Malayapur, inspired by the good health of Masura’s family, her neighbour Manirul Biswas has diligently saved Rs 300 to install a bio-sand filter in his house. Being a daily wager he can ill afford an expensive filter. For now, he carries two litres of bio-sand filtered water every day for his only child.
Features West Bengal Water Treatment … Water Resources NGO Jharkhand Down to earth Arsenic Appropriate Technology
Donate Now