Once called lords of the jungle, Baiga groups in Madhya Pradesh are starving on the margins of Kanha National Park. Shriya Mohan chronicles their struggle. 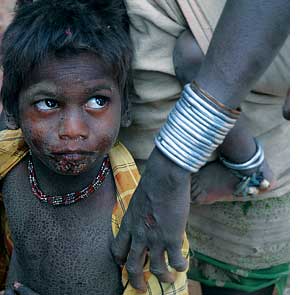 For Samarin seeing a tiger is as casual as her monthly sightings of the ration store supplier. “They come sometimes but as long as we mind our own business, they don’t do any harm,” she says, working in her small farm in the middle of the forest, her baby slung around her back in a cloth sack. Which is why she felt absurd when the 150 families of her village Jami were moved out of the forest to save the tigers. The village is inside the 940 sq km core zone of Kanha National Park, 200 km from Jabalpur in Madhya Pradesh. It is one of India’s critical tiger habitats, and in the past 30 years Jami is the 28th village displaced from the core to give the tiger more room.

The majority in Jami, including Samarin’s family, are Baigas, a “primitive” tribe in Madhya Pradesh’s Dindori, Mandla and Balaghat districts. Extensively documented in the 1930s by anthropologist Verrier Elwin, the Baigas were once known as lords of the jungle, hunters and gatherers who were inseparable from the wild.

It is a Sunday afternoon and Jami feels abandoned, with the moan of the wind thrusting against the loosely bolted doors. Samarin’s husband Dilip left before sunrise and would not be back before dark. “We have been on the lookout for months for cultivable land where we can farm and build a small house,” she says, the tattooed skin of her forehead knotting into a frown.

Although the forest department is giving Rs 10 lakh per family, for a nuclear family like Samarin’s this will barely make ends meet. Land prices just outside the core zone have become exorbitant. “There is nothing for less than Rs 1.5 an acre (0.4 hectares). To harvest enough grains to last the year and to build a small house we need at least five acres,” she says. Simple math tells you that Samarin cannot put aside any of the lump sum for a rainy day.

Samarin has seen more than her share of rainy days. Three-and-half years ago, she gave birth to a girl, Radha. By the time Radha was two months old Samarin was pregnant again. Radha was suckling at her breast and there was a foetus in her womb. In six months the milk was not enough and Radha grew thin. Samarin was becoming anaemic by the day. By the time Radha was 11 months old, Samarin gave birth to her sister, Saguni. 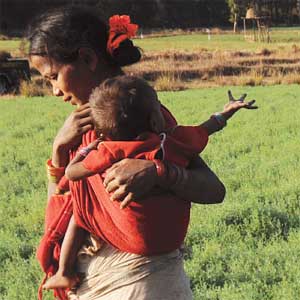 Priorities shifted. Radha was replaced by Saguni for breastmilk, and given a dry roti  as substitute. “That’s when she started becoming malnourished,” says Sumitra, the village anganwadi worker, who periodically weighs the children at Jami. By the time Radha turned two, when babies run and play, she could not walk. She was just bones with loose wasted skin, throbbing with constant fever. “I told Samarin several times to get Radha admitted at the nutritional rehabilitation centre (NRC) in Balaghat but she did not listen,” Sumitra says.

NRC is a hospital for acutely malnourished children, where the government treats the mother and the child for 14 days with a monitored nutritious diet. The state pays the parents Rs 65 per day, and Rs 300 for the travel up and down to encourage admittance. While the offer is attractive, the nearest such centre is 120 km away, a distance Samarin has not travelled in her life. Last September, Samarin found her daughter’s fragile body lying on the cot, cold and unmoving. She was three years old then.

Samarin has accepted her fate. Saguni is now two years and five months old but looks half her age. She has not been able to walk yet. She barely crawls when left on the floor. We lift her to put her on the weighing scale. She wails even louder, kicking to get out of the nylon seat.

It is all too familiar for her, the weighing, the checking of the circumference of her arm to assess her thinness, the touching of her belly to see how big its bulge is. The scale jumps nervously and settles on 7.1 kg. As per the new WHO growth chart, Saguni is “severely acutely malnourished”. A child her age should weigh above 9.75 kg. If she is not treated at this stage, Saguni is likely to spiral down the way her sister did.

Samarin does not have the answers to questions like what she will do about Saguni. There are more pressing concerns. Last year the monsoon was bad and her paddy crop failed. This year she has sown masoor (red lentil) on leased land. At Jami the ration shop owner gives only 25 kg rice each month, instead of their due 35 kg. The empty pages of the nregs job cards are pressed tightly shut, locked inside almirahs. The scheme stopped since mid-2008. The food is never enough to last more than a week. 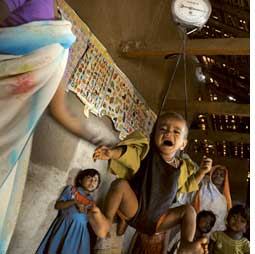 Samarin and her family eat twice a day. The menu is frugal: a weak, watery corn soup, rice and sometimes vegetables or dal. Tea is dessert, for milk and sugar are unaffordable to most. Saguni is now served the same fare. There has never been enough time or money to prepare separate baby food. Samarin leaves questions unanswered and walks away to cut masoor half the produce will go to the land owner.

Outside Kanha, 150 km west in neighbouring Mandla district, a cluster of 170 houses form Bhanpur Kheda, a village that was resettled in the 1970s when the forest department removed families from Kanha’s tiger habitat. The village constitutes Baigas and Gonds. But in this village, the Baigas are different. The women wear colourful sarees and blouses unlike the traditional red and white khadi cloth they usually drape over their bare tattooed bodies, exposing their inked legs. One can’t tell a Gond from a Baiga unless one squints hard to see a faded tattoo on the women’s foreheads. The jewellery is toned down from the striking havel —large silver coins strung together on colourful threads—to plain beaded necklaces. The men wear jeans and shirts and keep their hair short, unlike the typical long-haired, thin-moustached Baiga with kohled eyes. “Here a Baiga dances only when a government official or a tourist asks him to display his culture for a fee,” says Vivek Pawar, the founder of Vikalp, an NGO working on tribal rights in Mandla and Balaghat and a partner of the Right to Food Campaign fighting malnutrition in the state.

Phaggan Sinh is one such Baiga. When we catch him, he is on his mobile. The call is from his “contact” in Raipur, Chhattisgarh’s capital, 200 km away. There is a spot to fill in a steel factory. “I may be back next week or maybe after three months. As long as work lasts,” he says, smiling. In Chhattisgarh, they pay well at the factories, Rs 150 a day. Not like the forest department work in Bhanpur where they toil a whole day making barricades and talaabs (large pits to store water) for Rs 91.

Phaggan Sinh has nine mouths to feed, including his parents, brothers, sisters, wife and a seven-month-old baby boy, Shiv Kumar. Together they farm paddy, wheat and millets kodo and kutki on 2.4 hectares. None of the produce is sold in the market because it is not enough to feed the family. There is only one ration card in his father’s name. “What is 35 kg of rice for a family of nine?” he shrugs.

A look at his son Shiv Kumar betrays the poverty in which he is being raised. Shiv is frail and his palms and feet are pale. Weighing 5.75 kg, he is severely malnourished. Gambhir kam vajan, reads the WHO growth chart. A baby his age should weigh 6.75 kg. His mother Omvati is anaemic. “I’ve lost so much weight since I got pregnant and even now I have not recovered. I cannot work for more than 10 minutes at a stretch,” she says, cooking dal for lunch.

Ideally, Omvati should take Shiv to the anganwadi for lunch every day and take home a supplementary packet of khichdi and halwa every Tuesday. But the anganwadi at Bhanpur is locked most of the time. The columns in the anganwadi register meant to have records of children’s weights, vaccine schedules and food distribution are blank. The children were weighed last in July 2008. 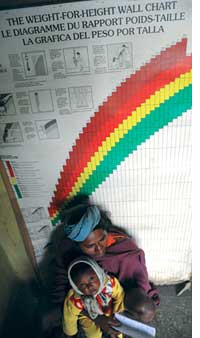 Health records in Dindori district, which has the largest Baiga population, is not any better. Shanti Bele is the district coordinator at Dindori for the state’s Integrated Child Development Scheme. She is solely responsible for the functioning of anganwadis. She has never heard of Kandha Tolla village, which has the highest malnutrition rate in Dindori. “About 40 per cent children in this district are malnourished. Anganwadi supervisors are unable to monitor the centres closely because these areas are difficult to access. How does the government expect them to go there with no transport?” she asks.

Balwant Rahangdale, a Right to Food campaigner in Dindori, says the forest department’s takeover of the jungles has affected the tribals the most. “The Baigas depended heavily on the forests for food and medicinal herbs, but today, with the department turning the forests into timber factories, the shrubs and roots are being wiped out,” he says.

But the old still cherish the memories of the good life they once lived. “There was always enough for all of us,” says Ramkali, an elderly resident of Bhanpur, remembering the days before displacement. Today she and her children walk miles and sneak into protected forest to collect firewood. One cannot help but feel that soon enough Jami will become a Bhanpur.

For the time being there is something to celebrate. One of the Baiga women has got elected a ward member in the panchayat elections. In the distant fields, Baigas are bringing out the maandal, traditional drums. The roll fills their limbs with life.