There is a large support of a passive nature, but no outcry against air pollution 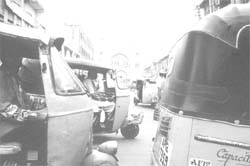 Hyderabad is at crossroads. A city rooted in history, it is raring to attain the title of being India's information technology capital. From being a congested old city with very high population density, it wants to become an industrial monolith with a surging economy. If only things were this simple. The quality of life will not improve in direct proportion with economic growth if the environmental conditions are not looked after.

Tishya Chatterjee, member secretary of the Andhra Pradesh Pollution Control Board (appcb), says industry and automobiles are the major causes of air pollution in the city. "About 60 per cent of the air pollution load in the city of Hyderabad is due to vehicles. The remaining 40 per cent is due to industry and other sources," says J Ramarao of the Society for Preservation of Environment and Quality of Life (speql), an ngo. 'Other causes' include construction materials, an aspect most people ignore.

APPCB studies show that spm levels that are well above the permissible limits. In January 2000, the total spm (tspm) count came close to 600 g/cum) as against the standards of 200 g/cum. The respirable spm (rspm) level was 250 g/cum against a permissible limit of 100 g/cum. The levels of carbon monoxide, oxides of nitrogen and sulphur dioxide are also quite high.

Chatterjee says the board is doing all within its means to create awareness about the pollution levels: "We have put up display boards that show pollution levels on a 24-hour basis. A newspaper publishes air quality data daily. People are informed about the air quality, but sadly, they seem to be doing nothing about it." W G Prasanna Kumar, social scientist at the appcb, says, "There is no public outcry against banning of old, polluting vehicles or any other source of air pollution. There is large support of a passive nature for fights against air pollution, but no active protests." Ramarao has another point to make: "These are technical things that are not understood by a majority of the population. We need something that teaches the people how air pollution happens, what are the consequence and how we can stop it."

But nothing seems to be changing. Government efforts are restricted to checking the backsides of cars and fining people who do not possess pollution under control certificates. Surely, if the state wants to move into the new age of information technology, it first has to put its environmental house in order. Kumar rues the fact that people are not being made stakeholders in the process of cleaning up the air, which is alienating them.

His views are shared by experts from all the cities surveyed in this story. They stress that air pollution is not taken seriously because it doesn't hit them like a flood or a drought, it kills slowly. And this slow murder goes largely unnoticed. "People don't care for air quality because it is something that one gets free of cost," says Subhash Dutta of Calcutta. Although the civil society is taking up the issue, it is buckled down by a serious lack of scientific research, which makes their case really weak in front of the courts. It is also very important that the air pollution cases are dealt with at the level of high courts and do not come to the Supreme Court. A variety of problems need a variety of solutions. Generating people's support is important. But it is equally important to stress upon air quality monitoring as well as more studies to be conducted on the health effects of bad air . And then to go to the people with the findings.It is the only way to preempt slow murder.