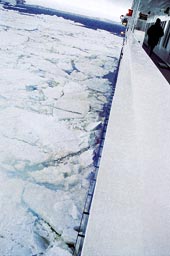 Unending expanse of snow. Blustering winds. Penguins. These were images my family -- avid travellers and passionate nature lovers -- had always associated with Antarctica. But beyond these images, the continent also evoked ineffable curiosity and for years, we had longed to visit it; our opportunity finally came last year.

We began preparations months before the actual date of the visit. Fitness reports had to be sent to the expedition operators in the us. The expedition takes visitors far from the nearest hospital. So it is imperative that those who make a visit to the icy continent are fighting fit before embarking on the trip. Our cruise counsellor had sent us a list of necessary items that included 14-16 inch high rubber boots, sturdy hiking boots, mittens, inner thermal garments and woolen jackets. The reflection of solar light from snow and ice can cause snow blindness, necessitating the constant use of dark glasses in Antarctica.
There are no direct commercial flights from anywhere to Antarctica. We left India by a Lufthansa airlines flight for Frankfurt and after a day in the city we took a connecting flight to Santiago, Chile and finally to Ushuaia, Argentina. Here we boarded the ship headed for Antarctica. The vessel was well-equipped with amenities such as lecture halls, a library with Internet access, medical facilities, sophisticated communications and navigational equipment -- it was a vessel built for discovery and expedition-cruising. All rooms had video feed, showing on board lecture series by ornithologists and scientists. We sailed through the "Brave Westerlies" between 40-60 latitude. This passage, also called the Drake Passage, is characterised by rough waters; 15-20 feet waves and a heaving sea are quite the norm here. Seasickness is almost unavoidable in the passage. Sometimes the ship would sway so much that we would see the ocean at one time and the sky immediately after.

One morning we were terrified to hear that bad weather had caused passengers from another cruise ship to be stranded on an island for almost a day without food and shelter, very close to an island where we were that day. Fortunately, all the people returned safe ly back to the ship, once weather conditions improved. The weather can be very unpredictable, so our daily schedules would change or, worse still, sometimes even get cancelled midway.
Sometimes the weather would appear promising on arrival at a particular spot, but hopes of landing would soon be shattered because of sudden changes in climate. Quite a number of times, alternative plans had to be made for landing because of bad weather, gusty winds or sometimes because of thick pack ice, still holding strong even though it wasn't winter. At many places we experienced the notorious katabatic wind. It blows at a speed of 26 meters per second and can lift one right off the ground. It's not caused by storms or clouds, but by gravity -- a slowly accelerating stream of cold air flowing along the long smooth slopes of the continent until it attains a crescendo near the shores.

But all the vagaries of the weather are easily forgotten after experiencing the overwhelming beauty of numerous gigantic tabular icebergs (almost 10-15 storey high), and meeting research scientists striving to understand the secrets of the continent. Among them was Andrzei Solecki, a Polish scientist who got on to the ship from the Henry Arctowski research station just before our journey to the Drake Passage. On board, Solecki delivered a fascinating lecture on human life - particularly that of scientists -- in Antarctica. He said that improvements in food and fuel storage facilities, transportation, housing, medicine and communication had made Antarctica quite hospitable. Earlier, explorers lived off the land to some extent; however, this was feasible only along the coast. Modern researchers depend more on their own resources and supplies. But many hazards remain. Amongst the most dangerous of them is fire: the continent's extremely dry air and high winds make it virtually impossible to control a blaze once it starts. Chemicals have to be pressed into service to contain it. Travelling in the Antarctic region for trips away from the station for fieldwork requires careful preparation and training, especially in mountainous areas where helicopters are useful. Because weather conditions adversely affect air transportation, aircraft casualties are not uncommon here. Detecting and crossing crevasses has always been a main concern for the Antarctic explorers, concluded Solecki.

At Aitcho Islands, we explored an Adelie penguin colony: the birds were spread as far as the eye could see. 5,00,000 penguins braying and clucking was a cacophony we will never forget. The Antarctic Treaty of 1959 enjoins all humans to minimise interference with the normal living conditions of the penguin. And so even though we were tempted to cuddle the birds we had to really resist from doing so and keep the mandatory distance of a couple of metres from them.

Seven species of penguins are found in Antarctica, representing 90 per cent of the continent's bird population. The Emperor penguin -- almost 3.3 feet high (1.0 m) and weighing between 20 to 45 kilogrammes -- is the largest of them all. At Halfmoon island there were Chinstrap penguins on almost every sloping rock and some, like true mountaineers, were way up on the slope, inspite of their tiny feet (only 20 centimetres). In the coastal Antarctic region are also found various species of seals and whales. We saw quite a few southern elephant seals at Halfmmon Island. Lying sluggishly on the shore, they looked like huge gunny bags.

On our route back we sailed past the historic Cape Horn (convergence of the Atlantic and Pacific Oceans), the scene of great drama for the men on those first voyages of discovery to the South. Many were shipwrecked here and a monument has been built in the memory of those who dared to venture this far South. And then, after two weeks that seemed to vanish into thin, icy air; our trip was over, and it had left us wishing for more.

Urmi Popat is a Mumbai-based architect