The pugmark method of counting tigers is all wrong 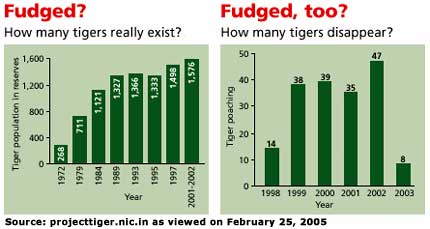 The Sariska scam reveals the tiger census is a lie. It is a lie because the method it is based on -- counting by tracking pugmarks -- is inadequate. The Union government has no role in the tiger census, despite being the main funding body. More appallingly, state forest departments do not keep records of a drop in tiger population. "How do you except us to conduct research about missing tigers, when we have others things -- such as tourism -- to take care of?" declares Arun Sen, chief wildlife warden, Rajasthan.

For the past 30 years, India's wildlife officials have used only the pugmark method to monitor tiger populations. Invented in 1966 by Indian forester S R Choudhury, the method requires thousands of people to fan out across jungles for a 1-2 week period every year, searching for tiger tracks. Once located, plaster casts (or tracings) are taken of the left hind paw. Pugmarks so collected are then compared to identify individual tigers. Cross-comparisons among census blocks and reserves refine the identifications. And so comes about what is called a reliable estimate tiger numbers in India.

The method presupposes the following: in a given area, adult male and female tigers do not belong to the same species; tigers live in pairs; transient (non-breeding) tigers reside in marginal habitats, away from core breeding areas; and, tiger populations at higher densities have a relatively lower proportion of transient tigers. On this basis, it is assumed that the probability of the tracks of the same tiger being found in different counting units is negligible, so avoiding multiple counts.

But this inference is wrong, shows a 2003 review paper, ' Science deficiency in conservation practice: the monitoring of tiger populations in India ,' published in the journal Animal Conservation by the Zoological Society of London. Researchers from India, Nepal and the US marshalled the review. After analysing scientific data on tiger ecology, they found tigers are polygynous and do not form pair bonds. Although breeding tigers may occupy exclusive ranges in some high-density areas, neighbours intensively use the same travel routes. In other areas, overlap between individuals is considerable. In low tiger density areas, even breeder ranges show large overlaps. More importantly, adult male ranges spatially overlap two-six breeding territories. Thus, the pugmark census is not scientific.

The paper further states: India's tiger habitat extends over 300 million hectares. But in reality, only an unknown fraction of this area is intensively searched. For example, only about 30,000 hectares out of the total three lakh hectares of the Namdapha tiger reserve was covered in the 1996 census.

The 2003 review paper cites other difficulties: in some areas, like the Western Ghats and north-eastern hills, substrate (soil layer) conditions and terrain hinder track location. For instance, a study in the Nagarahole reserve in Karnataka -- it has a high tiger density; 12 per 10,000 hectares -- showed pugmarks were often impossible to detect along many tiger routes because of inappropriate substrates; but other methods such as radio-telemetry and camera trapping showed intensive tiger movements in these routes.

Also, lifting footprints from a firm substrate overlaid with dust or sand is an essential precondition to get an accurate pugmark. But such ideal soil conditions do not occur in most areas. So, artificial track-plots (called pug impression pads) are often laid out. But these track-plots often do not work due to practical problems: lack of suitable soil in the vicinity, the logistical problem of transporting soil, and the effects of rain, wind or animal movement. For example, the track plots observed in Namdapha during the 1996 pugmark census were made from the wrong soil type.

The paper questions the census on another account: "Field mangers initially reported an increase in tiger population in 1994, despite mounting evidence of deteriorating reserve protection and increasing poaching pressure. In response, the authorities of Project Tiger arbitrarily reduced the census tally by 750 tigers, to instil a sense of crisis among field officials. Although the situation has not improved greatly thereafter, recent pugmark censuses are once again reporting increasing tiger numbers."

This is obviously a case of inflating numbers. Why do that? Funding? "No, that's not a problem. Funding is always available because of the generous bureaucracy. Wrong census figures can be attributed to lax attitude. Officials are hardly interested in working in the fields, and the method leaves a lot of scope for fudging, as its rate of error is very high," says R S Chundawat, an independent wildlife researcher.

Is no wildlife manger interested in telling the right numbers? Explains Rajesh Gopal, director of Project Tiger, Union ministry of environment and forests: "If one field director has given a number of 22 tigers, then the subsequent one can't give a lower number. If he did, it means more hassles. Who wants them? Moreover, to know there is a problem, one has to go to the field. How many of our top wildlife mangers bother do that. Most prefer to sit in air conditioned rooms and watch television." Has Gopal tried to rectify the situation in his three-year tenure? "We were following the pugmark method till now because it is cost-effective. But this means that science is missing from tiger conservation efforts. We have now evolved a programme to tiger population using the Global Imaging Satellite System." But this could take time; what happens in the interim?

They also say that using a single method countrywide is bad thinking. "There is nothing wrong with the pugmark method, but the Indian government has over-abused it. It primarily is an indicator of the tiger population, and not the best way to judge exact numbers," says Johnsingh. "The choice of census method should, most importantly, depend on population densities and the terrain," feels Qamar Qureshi, reader, department of landscape level planning and management, wii. In a high-density area, where protection is good, camera traps can be used to estimate numbers. In a terrain with good substrate, and where tiger numbers are less, the pugmark method is quite reliable. Otherwise -- where substrate and terrain are bad, and tiger density high -- the method fails.


Wildlife management does not necessarily entail knowing exact animal numbers. It's more about protecting them and their habitat. At present, Project Tiger claims there are 1,576 tigers in its reserves. This figure looks high; it gives the sense that these animals are 'safe'. For this very reason, it is misleading. Fudged census apart, this is an aggregation of hundreds of populations, most of which are small and isolated, and so highly vulnerable.

As per an analysis conducted by Chundawat, and Neel Gogate of the World Wildlife Fund, tigers have mostly disappeared from 70 per cent of their original habitat in semi-arid forests and from 35 per cent of dry tropical forests. These two habitats together form the largest (over 45 per cent) tiger habitat in India. If this trend continues, they assert, lots of India's tigers will stare extinction in the face.

During their research in the Panna Tiger Reserve, Madhya Pradesh, Chundawat and Gogate found the survival of tiger populations depends more on the size of the breeding population. Any tiger population is a mix of territorial (breeding) and non-territorial (transient, non-breeding) individuals. The former remain constant; the latter fluctuate.

In a typical tiger population, territorial/breeding types are proportionally smaller. The viability of this population depends on how large or small this proportion is. For example, in a population of 100 tigers, if only 10 per cent are breeding, the population may not be viable in the long run, despite being large: the larger proportion of fluctuating non-territorial tigers contribute little to viability. "To save a tiger population in the wild," they conclude, "The park management needs to create conditions suitable for maintaining an appropriate proportion of territorial tigers. A preliminary analysis of our data indicates that a minimum of nine female (breeding) territories would keep Panna's population of 35 tigers viable."