Resource-rich countries remain poor, and they spend most of their income on food. Developed countries conitnue to increase their appetite

OUR CONSUMPTION patterns are mocking at Earth’s precious natural resources. Consider this: humanity’s footprint already exceeds the planet’s regenerative capacity by 50 per cent. About 85 per cent of the world’s population is living in countries running on a biocapacity deficit. “Growing per capita consumption coupled with declining per capita biocapacity amounts to a growing gap between ecological supply and demand. This overshoot becomes apparent in the form of climate change, biodiversity loss, deforestation, soil erosion, food scarcity and other problems,” says the Living Planet Report 2014. This year’s World Environment Day focuses on ‘Seven Billion Dream. One Planet. Consume With Care’. If current production and consumption patterns remain the same, and world population touches 9.6 billion by 2050 as expected, we will need three planets to sustain our way of life (see ‘Eaten hollow’,).

Humanity’s ecological footprint has more than doubled since 1961. This growth is largely attributed to the carbon footprint, which has increased to comprise 53 per cent of our footprint in 2010 from 36 per cent in 1961. Carbon emissions (in particular) and food demand are the major drivers of the escalating footprint, says the report. On a per capita basis, the countries with the biggest ecological footprints are USA, Singapore, Bahrain, Sweden, Kuwait, Qatar, UAE, Denmark, Trinidad and Tobago and Belgium (see ‘Footprint by country’). The ecological footprint of the top five countries makes up about half the global total.

This global overshoot means, for example, that we are cutting timber more quickly than trees can re-grow and releasing CO2 faster than nature can sequester it. For more than 40 years, humanity’s demand on nature has exceeded what our planet can replenish. At the same time, vertebrate wildlife populations have declined, on average, by more than half in just 40 years, as measured by the Living Planet Index.

But consumption patterns are riddled with ironies. Resource-rich countries remain poor, while per capita consumption among developed countries continues to steadily grow (see ‘Consumption of resources...’). 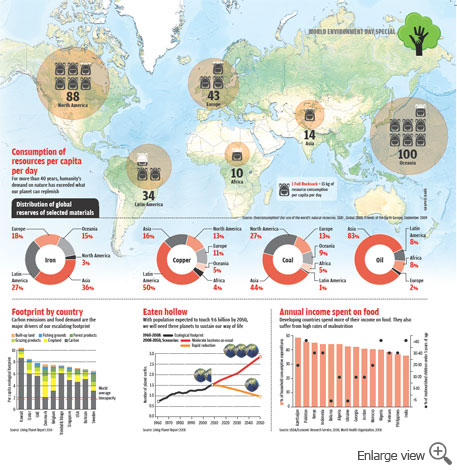 At the same time, developing countries are spending more of their income on food than developed countries while also suffering high rates of malnutrition (see ‘Annual income spent on food’,).