India gets wastes from 105 countries. The waste import sector is truly bewildering 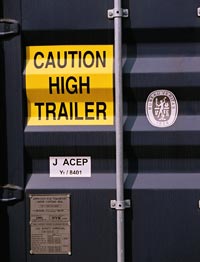 Waste can be broadly classified as hazardous and non-hazardous. Globally, the trade in hazardous waste is governed through the Basel Convention on the Control of Transboundary Movements of Hazardous Wastes and Their Disposal. In India, hazardous wastes are regulated under the Hazardous Wastes (Management and Handling) Rules, 1989, further amended in 2003. These rules define hazardous waste as "any waste which by reason of any of its physical, chemical, reactive, toxic, inflammable, explosive or corrosive characteristics causes danger or is likely to cause danger to health or environment, whether alone or when in contact with other wastes or substances."

The 2003 amendment rules further categorises hazardous waste under various schedules. Column 3 of Schedule-I, for instance, lists hazardous waste generated during some processes. Schedule 2 lists hazardous waste based on their concentration limits. Schedule 3 lists wastes applicable for import and export.Under this schedule, there are certain wastes, like lead waste, waste oil, non-ferrous metal wastes, which can be handled only by registered re-processors and recyclers. The recyclers have to be registered with the Central Pollution Control Board (CPCB), which is supposed to monitor these units. Schedule 8 of the rules lists 29 categories of hazardous wastes, which are prohibited for import and export under all circumstances.

The Directorate General of Foreign Trade (DGFT) is the agency under the Union ministry of commerce and industry, which issues licenses for all imports, including scrap. The ministry website makes for fascinating reading as it shows that India is literally becoming the biggest centre of dirty trade in the world. We get waste from 105 countries, including some of the poorest in Africa. We also get almost all kinds of scrap -- from steel to incineration ash, to pig hair. This waste trade is growing big time. The problem is that it remains more or less unregulated in the country. It creates pollution. It is a health hazard. It adds to the damage we are creating with our own consumption and waste. We can't manage our own waste and we are importing more and more from the rest of the world. It is time we asked, with this trade growing exponentially, what will happen to the trashcan called India?


Down To Earth analysed the import data presented on the Union ministry of commerce and industry website to get a picture of the trade. We looked for all categories and sub categories that listed waste and scrap. We found the list went on and on. We then started digging for the big imports of scrap and tracked their source. We put together data for iron and steel scrap, other metal, heavy metals, plastic and other toxic type waste. The total imports of just these select waste items -- roughly 43 -- increased from 1.92 million tonnes in 1997 to 2.72 million tonnes by 2002-2003. In these six years, the country had received 14.05 million tonnes of this waste. 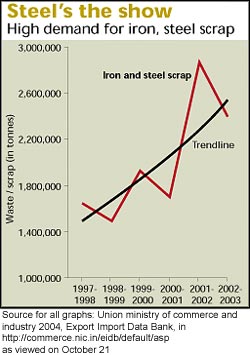 It has grown from 1.64 million tonnes in 1997-1998 to 2.39 million tonnes in 2002-2003, a compounded growth rate of over 45 per cent (see graph: Steel's the show). We get just about everybody's waste. But when we looked at the category called 'other steel and iron waste scrap', we found that the UK sent us the biggest gift. It exported 2.1 million tonnes in the last four years, roughly 34 per cent of the total waste we received in this category. The notorious Bhushan Steel and Stripes Ltd consignment, which blew up in our face, came under this same category. 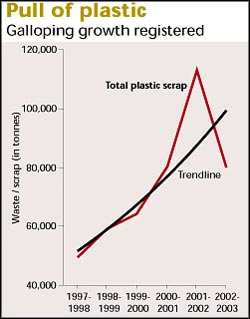 We don't care much about what we import. Between 1997 and 2003, India brought in 6,847 tonnes of polyvinyl chlorides (PVC) scrap. The imports increased by more than 700 per cent over this period. Not surprisingly, the US was the major exporter, followed by Belgium. Nobody knows where this waste ended up as there are no restrictions or regulations on the import of PVC scrap in the country. This when we can't dispose of our own PVC waste is indeed ironical. PVC when burnt releases deadly dioxins and so is a constant nuisance. But then, who cares. We are making money. This is economic growth.


Heavy metal scrap falls into different types of regulation. Importers of lead, zinc and nickel scrap need to be registered with CPCB, while tin and cadmium waste is not part of the restricted list and can be imported with a license from DGFT. Only chromium waste is on the banned list under the hazardous waste rules. 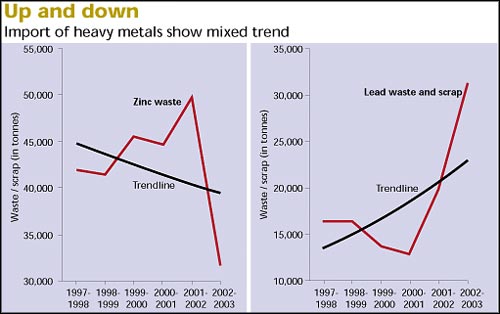 Tin scrap -- small quantities -- has gone up from 26 tonnes to 108 tonnes. Cadmium imports have gone down and chromium has stopped since 1999-2000, when the 2000 amendment to the Hazardous Wastes (Management and Handling) Rules came into force.


An answer to this is difficult simply because it will depend on the capacities of the customs to check and monitor the waste trade. There are cases when illegal waste has been detected in consignments. But there is a bigger issue escaping notice: we import large amounts of hazardous substances, if not their waste. 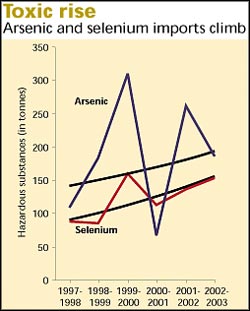 We import selenium and thallium. We also import unimaginable amounts of mercury. The waste of all these is banned for import or export. The moot question is: how do we know we aren't importing waste and only the substance? Can we really manage these hazardous substances, which the rest of the world is rejecting?


Everybody's. We import from the rich countries; recycling costs are high there. So, from the US to Japan to European countries, all send us their waste. But we also import from several poorer countries. Sudan, for instance, provides lead scrap. The steel scrap we import is sourced from Burkina Faso, Benin, Mali and several other African countries. The biggest exporters of lead scrap to India are Australia and the US. Exporters of cartridges of other alloy steel of all bores and sizes (ammunition) include several conflict zones, like Kuwait, which borders Iraq (see table: Explosive).