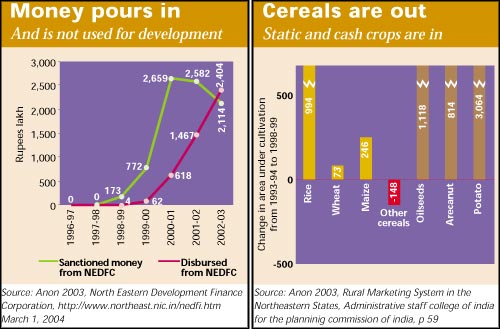 Meghalaya's chief minister admits the state is in a mess. Among states in India, it ranks 24th in the country's Human Development Index and 21st on the index of social and economic infrastructure. "The state government and the adcs have floundered a bit," concurs a cabinet minister in the present state government.

This isn't due to lack of funds. "The central government has been pumping money as grants and loans to the state, yet the money has failed to reach the villages," points out Sanat Chakraborti, editor of Grassroot Options, a Shillong based magazine (see graph: Money pours in). The effect: as traditional ways of earning a living crumble, people find it tougher to get work.

Jhum, or shifting cultivation -- once effective and sustainable in the undulating and small valleys of the region -- is on its way out: only about 50,000 families practice it in Meghalaya today. Jhum cycles have reduced from 8-10 years to 5-7 years, points out P S Ramakrishnan of the Jawaharlal Nehru University, New Delhi. Consequently its ability to allow land to regenerate has reduced, rendering the process increasingly unproductive. People can only shift to cash crops like ginger and potatoes. But the shift implies a level of integration with the mainstream economy that Meghalaya has never seen before.

The net sown area has remained static -- it is a meagre 0.09 ha per person -- whereas pesticide usage has increased by 2 tonnes annually. Foodgrain production has only marginally improved in the past two decades (see graph: Cereals are out). "While much of the state government machinery continues to run its research putting down jhum as it is practiced today, research groups studying the impacts of cash cropping on the ecology or improved jhum technologies are rare," says Toki Blah, former director, International Fund for Agricultural Development (ifad) that's running a programme to revitalise livelihoods in jhum villages. ifad has made a minor beginning in the Garo hills, but the state government is yet to assimilate its lessons.

Customary land ownership patterns bedevil this situation. Although the various Acts related to the land tenure system -- the United Khasi Jaintia Hills Autonomous District (Transfer of Land) Act, 1953 and the Meghalaya Transfer of Land (Regulation) Act, 1971 -- have significantly departed from customary practices, the latter are still followed and enforced. Land in Meghalaya is held by a family's matriarch, or by the community in trust. Each village in the Khasi hills has its known lands, in which rights of private ownership are recognised. The village council distributes and allots community land for use.

In the Khasi hills, a member can cultivate a patch as long as required. If the land is left fallow for more than three years, it reverts back to the community and can be utilised by another member. Intrinsic to this style of land-use is the absence of land records, or codified customary laws. Thus, borrowing money from banks becomes tough, for banks demand documentary evidence of ownership. And, while the male member of the family manages the land and the family resources as an agent and transacts the daily business, ownership resides with the woman. The banks find it tough to manage around this fact. This is reflected in the fact that the state ranks 30th in per capita utilisation of credit available to it, a debilitating trap.


The Planning commission estimates that 33.87 per cent of Meghalaya's population still remains below the poverty line (1999-2000). But as Robert Kharsiing points out, "Imagine, 45 minutes from Shillong, in Smit where the people conglomerated -- the capital of the biggest Khasi hima -- there are villages without electricity." (see pie chart: Darkness) While the voltage dips, unemployment peaks. Official figures show that out of the state's 9.56 lakh workers, 2.14 lakh are marginal (they work for less than 180 days in a year). This number is hotly contested.

What is not is that Meghalaya's educated youth has turned increasingly to militancy. Two major militant groups -- the Hynniewtrep National Liberation Council and the Achik National Volunteer Council -- operate here. Their cadre strength, political observers say, is an index of employment levels. And as the guns boom, a vicious circle -- militancy keeping development at bay, underdevelopment, and so militancy in return -- repeats itself.


Meghalaya's forests used to be a crucial source of income. A Supreme Court order of 1998 to stop logging in the northeast brought to a halt the large-scale felling of trees. Yet, in a state where 90 per cent of the forests are owned by the people, very few people benefit substantially from the trade. "A study based on a survey of at least 20 villages of the West Khasi hills," writes Chakraborty in Impact of logging ban on livelihood, "Found how the entire logging activities were organised in remote villages and in what ways the timber trade influenced people's lives. Interviews and discussions with village elders, traditional heads, women, logging workers, mill owners, timber contractors, traders (malik diengs), government officials and others suggested there was no concept of organised tree farming in villages. None of the people could confirm they had specific harvesting and replanting schedules for their forest. They were just buying new forests and clearing them off." He mentions cases of malik diengs buying large tracts at Rs 60 per tree, then selling them to bigger contractors outside the state at Rs 165 per cubic feet. It was a pittance, but thousands of families did depend on the trade. Since the 1998 order, many joined the ranks of the unemployed.

The adcs, responsible for making new management plans (along with the forest department) to allow sustainable harvest, have not moved on the case. Admitted M R Lingwi, former executive member of the Khasi Hills adc, in a September 2003 interview, "The adc has not taken any action on this front. We know that many lives depend upon forest resources and this should be done on a war footing." But the fact that the central government funds for afforestation and forest management were routed through the state government and not the adcs created problems, notes B Datta Roy in The Seventy Third Amendment Act 1992 and the State of Meghalaya.


This is not the only issue on which adcs have come a cropper. They simply haven't used their legislative powers to benefit the region. Instead, they have enacted the United Khasi-Jainita Hills Autonomous District (Appointment and Succession of Chiefs and Headmen) Act 1959. The act provides for removal and suspension of chiefs. It also debars them from participating in any elections of the parliament, state legislature or district council unless certain strict conditions are met. "The act has been misused on several occasions and syiems and dolois removed at the whims and fancies of the district council," says Neindro Syiem of Maharam. A senior state bureaucrat agrees: "Very often the chiefs are appointed or removed on the basis of their political affiliations and the new incumbents then work in cahoots with the members of the adc." Many traditional chiefs have taken to party politics to keep their new masters happy, admits one syiem. Interestingly, the Supreme Court too has upheld in a case that the chiefs are only officers of the councils under the Constitution and upheld the validity of the 1959 act. The sixth schedule was amended in 1969 to empower state governments to entrust autonomous councils with functions relating to agriculture, animal husbandry, community development projects and cooperative societies. adcs have failed to deliver on these fronts, says Datta Roy.

Perhaps the most glaring example is that the adcs, till date, haven't carried out the cadastral mapping of the region -- the only way to ascertain land-holding rights and demarcate boundaries. "In the absence of such mapping, much of the data we have related to agriculture, land and productivity for the region sure seems unreliable," admits a senior officer of the North East Council, Shillong.


This lack, and the fact that traditional rules haven't been codified -- the adc can undertake this, too -- means neither government nor concerned institutions can quantify the changes in land holding in the last 40 years. Says Patricia Mukhim, a senior analyst and journalist based in Shillong, "A new elite has risen in Meghalaya. A class of land-lords that did not exist before in the egalitarian land holding system. When community lands are distributed individuals own them. Poverty forces people to sell off land. Land may initially be distributed in the name of a woman but the subsequent buyers are timber merchants or other male businessmen, who buy the land for when their children need to look at farming as an alternative, since they know that scope for employment in the city is virtually non-existent." No data exists on this. But as Kharsiing says, "Yes, there is a very rich class in Shillong today, a certain politically influential elite group which seems to prosper regardless of the condition of the rest of the state, but that is not true in rural Meghalaya; there is no land alienation." S S Syiem, a former syiem of Nongstion, says, "Our traditional system of land owning and the clan has always provided for the poor. But we now have to quickly adjust to the new regimes or the the situation will worsen."

Social scientists today question whether these institutionas are democratic, and whether they can tolerate the presence of large numbers of non-tribals in the state. Their method of working is suited to manage composite and homogenous groups, says Apurba Barua, professor of anthropology at nehu, Shillong.

Also, "Traditional institutions lack ability to handle the new economy," says John F Kharshiing, spokesperson for the Federation of Khasi States, a broad umbrella group of all traditional institutions in the Jaintia and Khasi hills. A section of them have been tainted with corruption, too. "But one cannot dismiss the entire tradition because of a few bad examples," defends P R Mawthaw, a minister at the hima level.