The government refuses to acknowledge that arsenic menace has a spread 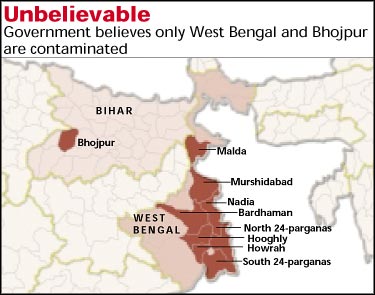 In July 2004, the Union ministry of water resources was asked a question in parliament on the extent of contamination of water by arsenic and fluoride.

The ministry replied that arsenic had affected the following eight districts of West Bengal -- Malda, South-24-Parganas, North-24 Parganas, Nadia, Hooghly, Murshidabad, Bardhaman and Howrah. Other than this, only Bhojpur district in Bihar was "known" to be affected by excess arsenic.

The Union government has a network of 15,000 hydrostations to monitor water quality. Why hasn't this network enabled the government agencies to track down the extent of contamination? But then an easy excuse is that drinking water is a state subject, and hence, says the Union government, its quality is "not its responsibility".

Two agencies, along with their state partners, are primarily responsible for groundwater surveillance. The New Delhi-based Central Ground Water Board (CGWB) is charged with monitoring quality and providing technical guidance to state governments. In 2003, it had supposedly surveyed a number of wells for arsenic. But it did not find the toxic element in Uttar Pradesh. It is said of this survey report, which Down To Earth was unable to get its hands on (see box: They seek...), that the agency tested shallow wells, not known to have arsenic.

The Rajiv Gandhi National Drinking Water Mission (RGNDWM) is responsible for rural water supply programmes. Till 1998, the Centre had to sanction RGNDWM's sub-missions on water quality, under which 15 per cent of the programme funds are to be used for water quality maintenance. But now these are delegated to the state governments and they are required to conduct a primary water quality survey in 10 per cent of each block; if there are problems of contamination, then the entire block has to be surveyed. But clearly these "surveys" are not yielding much. "As per our 2004 data, 4,973 habitats (a habitat is defined as 100 people or a maximum of 20 households) in West Bengal, 45 in Bihar and 11 in Chhattisgarh are affected by arsenic," Rakesh Behari, director, RGNDWM, told Down To Earth.

Monitoring the water quality is a low priority. "Most money is spent on coverage (providing water to as many rural areas as possible). We are helpless to ensure that the state governments pay attention to quality. We can't stop funding them as endless people would die," Behari added.

In May 2001, the Union ministry of environment and forests (MoEF) set up the Water Quality Assessment Authority under the Supreme Court's directions. Chaired by the secretary, MoEF, this authority includes representatives from other ministries concerned with water quality. The responsibilities of the authority include drawing action plans for quality improvement in waterbodies and monitoring the implementation of different schemes. But the Report of joint committee on pesticide residues in and safety standards for soft drinks, fruit juice and other beverages has cast doubts on the authority's efficiency to monitor water quality, since it appears to lack the power to take any legal action against other agencies. "To date, our work has been limited to the files. Everybody has forgotten about the existence of this authority. One can gauge this from the fact that its last meeting was held in 2003," admitted V N Wakpanjar, senior joint commissioner with the authority.

Clearly it is easier to deny that the problem exists. Less work. Less stress. Who cares about Dinanath?