A national programme on restoring waterbodies is mired in flaws 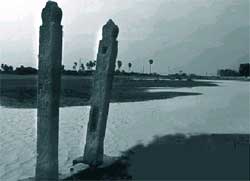 In the 2004 budget, tabled last July, finance minister P Chidambaram had announced with fanfare the Rs 100 crore National Programme for Renovation, Restoration and Repair of Waterbodies linked to Agriculture (nprrrwa). But not much has happened since. In the 2005-06 budget, presented last month, he restated nprrrwa will be launched in March 2005. This pilot project is "planned for 16 districts in 9 states and will cover 700 waterbodies and 20,000 hectare of additional land", said the minister in his budget speech.

But little is known about the scheme's details. The Union ministry of water resources (mowr) has been made the nodal agency for its implementation and its officials reveal, "By the end of March 2005, we plan to release around Rs 15 crore." But for states that had submitted proposals under nprrrwa, it has been a long wait. Says E Venkataiah, secretary, minor irrigation, Karnataka, "The proposals submitted last August are yet to be approved."

The guidelines for nprrrwa's implementation are still being prepared and officials are tight-lipped about its details. Strangely, nobody even knows how much money has been allocated for the scheme. While Chidambaram said Rs 100 crore had been earmarked, the approval given by the Union cabinet mentions the expenditure outlay of Rs 225 crore as central assistance for this Rs 300 crore scheme. Its duration is from 7 to 10 years, and again, it is not clear if the entire sum is to be distributed over this period.

According to mowr, the scheme is "expected to raise the issues to be addressed by the National Water Resources Development Project" slated for 2007, whose objectives have not been spelt out. In 2004 , Chidambaram had announced, "We would select at least one district in each of the five regions of the country." Planning Commission sources say pressure from parliamentarians led to a major change -- relaxation of the regional restriction. They say the funds will now be divided among 25 states with 2 districts each. This means 50 districts will share what was conceived for five districts.

mowr sources told Down To Earth there will be no ceiling on allocation to a state, though a limit of Rs 30,000 per ha of command area has been set. With such provisions, no one knows how the fund will be distributed among the states. Also, nprrrwa will not draw funds from existing programmes such as the Sampoorna Gramin Rozgar Yojna, as planned earlier.

The government's decision to make mowr the nodal agency for nprrrwa raises serious concerns. Rural development programmes are usually implemented by the Union ministry of rural development (mord). Many experts point out mowr has little experience in working with rural communities. Planning Commission member Kirit S Parikh is more guarded when he remarks, "Since a new ministry is introduced, careful coordination shall be required." But mowr officials clarify, "Water linked to agriculture is irrigation and it demands technical inputs, hence the decision."

mowr has been quick to make the scheme a bureaucratic-technical ladder. At the state-level, the minor irrigation department or the department in charge of irrigation will oversee nprrrwa, an official said. Further down, a district level committee (dlc) chaired by the district collector will choose the implementing agency. " dlc will have representation from ngos, different departments, panchayati raj institutions (pris), local mlas/ mp s and water users associations," the official added. Cautions R Sakhtivadivel of the International Water Management Institute in Andhra Pradesh, who has extensive experience in reviving tanks, "It should not end up as a contractors' programme where excavators wrap up the work in a couple of days." But the mowr official dismisses such fears using the faade of dlc, which he says will oversee the scheme and ensure people's participation.

What do the states think? Sundara Sekharan, engineer-in-chief, Water Resources Organisation, Tamil Nadu, says, "The state public works department will be the implementing agency." But in states such as Karnataka, village-level tank user groups have implemented similar schemes initiated earlier.

Experts believe the involvement of local communities is essential for long-term gains. Says C R Shanmugham of Dhan Foundation, a Madhurai-based ngo known for its work on tank renovation in South India, "Tank users must be involved right from the stage of planning." This is imperative in understanding the status of the waterbody including its catchment, waterspread and command area, he adds.

The draft guidelines, however, follow the much tried and abused ways of people's participation. After restoring a waterbody, say sources, the government agencies will hand it over to the community for operation and maintenance. This approach has failed in the past because communities are unable or disinterested in managing the asset after it has been supposedly repaired. It also leads to huge costs as government agencies pay "official rates" to "official contractors". Says Shanmugham, "To create a sense of ownership there should be matching financial contributions from the community as well which could go into a corpus fund."

Sources say nprrrwa will only include tanks with a command area from 40 ha to 2,000 ha. Interestingly, this size distinction hides an important fact: the programme targets only "official" waterbodies controlled by the minor irrigation department in most states. The smaller tanks are usually owned by pris, as is the case in Tamil Nadu.

In his detailed study, Tanks of South India, irrigation economist and former member, Planning Commission, A Vaidyanathan finds 86 per cent of the region's tanks irrigate less than 40 ha while only 13 per cent irrigate 40 to 200 ha. But mowr is cautious about working with people, and its officials, who did not want to be named, said, "Smaller tanks fall under the jurisdiction of local bodies and pris and we don't want to interfere in the existing system."


Initially, the programme design ignored catchment area and feeder canals, which bring water to recharge the tanks. States prepared their proposals accordingly. This, when it is well understood that there is no point in planning for water without planning for its catchment.

But this was changed when mowr submitted the proposal to the Union cabinet, which insisted 15 per cent of the funds be kept for catchment "treatment". It is not clear how the money for the catchment will be spent because often this land belongs to the forest or other government departments.

Also, a review of earlier tank renovation schemes reveals such minor fund allocation for catchment treatment alone may not help, as encroachment is a major issue. According to Vaidyanathan, government's reluctance to take firm action against encroachers has always been the bane of such schemes. But mowr adopts a rather nave approach, saying, "As the community is involved, they will themselves sort this out."


No one knows. While the Union cabinet cleared the scheme for 7-10 years, mowr says it will be succeeded by the National Water Resources Development Project in 2007. This leaves the states with just two years to complete the project. Sakhtivadivel feels this is not enough: "At least three years would be required. The project has to be implemented in three phases -- institutional formation and strengthening, implementation, maintenance and management."

Responses from the states vary significantly. While Karnataka feels even a year will be enough, Andhra Pradesh wants at least three years to address important issues such as encroachments while implementing the scheme.

Who will monitor it?

mowr says dlc will monitor nprrrwa at the state level and the Central Water Commission (cwc) at the Centre. But no specific monitoring indicators have been developed. Vaidyanathan and other experts demand stringent mechanisms to cross-check not only the physical progress but also the scheme's impact. This is particularly important as cwc lacks experience in managing such relatively small waterbodies.


What is appalling is given the vast knowledge from previous tank restoration schemes, the government is planning to repeat the mistake of turning everybody's water business into a centralised bureaucratic entity. It is clear these waterbodies, if restored, will play an essential role in recharging groundwater, providing irrigation and drinking water security. But as it is planned, the scheme the finance minister had launched as "one of my big dreams" promises to be a nightmare instead.

The challenge is to build this programme with communities as they alone can invest in their water security. Equally important is to link nprrrwa with the current efforts for decentralisation in the country so that pris are involved. This scheme must also establish links with the ongoing programme of watershed development, under the various programmes of mord as well as the National Afforestation Programme under the Union ministry of environment and forests as well as develop programmes for grazing land development under the ministry of agriculture.

Water has to become everybody's business, not only of the officials and engineers in mowr.