Will a disaster take place before strong laws are adopted to protect the world against irresponsible introduction of s? 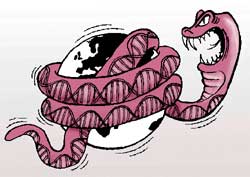 Should gmos be banned or should caution be exercised in their introduction into the environment? If so, the need of the hour is a strong law to protect countries of the South.

The us has already set the precedent by banning transgenic cotton resistant to the pesticide bromoxynil. The us Environment Protection Agency (usepa) believes that bromoxynil can cause cancer and birth defects.

The premise on which companies operate needs to be reviewed. It might help if biotechnology research were to concentrate on creating better products rather than come up with products requiring large doses of toxic chemicals.

The loss of the world's plant genetic resources due to current agricultural practices could be hastened by the irresponsible use of transgenic plants.The release of gmos into the environment has the potential to disrupt the relationships which underpin evolution and ecological stability. Introduction of novel traits in wild organisms may alter their biology, upsetting the local ecosystem. While some transgenic crops could become noxious weeds, others could transfer new genes to wild types which could then assume weed status. Persistent reproduction by these transgenics could also erode diversity. Transgenic products may have an effect on non-target species, affecting species that have not been part of any study.

Biotechnology could have an adverse socio-economic impact also. It could effect exports by replacing traditional crops. High return crops could affect nutrition, resulting in an unbalanced diet.

Though it is not the same thing there are lessons to be learnt from India's crossbreeding programme in animal husbandry. There are a host of Indian domestic milch and draught animals adapted to the Indian environment. Extremely hardy and resistant, requiring low inputs in the form of feed and care. In an attempt to introduce high-yielding breeds foreign strains were crossbred with Indian domestic livestock. It was only later that farmers realised that though these strains produced more milk they required more feed and specialised housing. Therefore the expense on them more or less offset the gains from them. Moreover they were not hardy enough for the Indian environment.

Nevertheless, an unrestrained crossbreeding programme resulted in the proliferation of crossbreds and pushed Indian breeds into isolated pockets in the interior of the country and to the brink of extinction. Worse was to follow. While the productivity of the first generation crossbred Indian stock was high it declined drastically with each succeeding generation. In the end, farmers were left in a lurch.

Furthermore, foot and mouth disease, a consequence of germplasm import, today costs the government Rs 2000 crore annually. This crossbreeding fiasco has a message. A worse situation could come about due to the introduction of gmos. While Indian breeds can still be saved if sustained efforts are made, once modified genes run amok it could lead to an ecological nightmare.

"While transgenic plants may be a solution to food security, we must be very cautious, more so in the case of gene transfer within species," says R S Paroda, director general, Indian Council of Agricultural Research, New Delhi.

"The very fact that microbes, plants and animals are so very different speaks for itself. There must be some logic behind this," says P K Ghosh. And he may be right.