ANJOLI BANDYOPADHYAY visits Pench Tiger Reserve, the site of many a conservation scheme and finds the woes wrought upon the people there by ecodevelopment 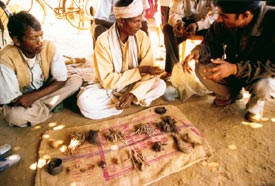 At the entrance to the Pench Tiger Reserve -- spread over 758 square kilometres (km) in Madhya Pradesh and Maharashtra -- there is a signpost. Welcome to Mowgli's land, it says. Mowgli's land has been the object of many a conservation effort. In 1977, it was made into a sanctuary to protect tigers and in 1983, the Pench National Park was carved out of this sanctuary. When the government -- with World Bank aid -- embarked on its much- flaunted ecodevelopment project in the late nineties (see 'Officially Bankrupt', Down To Earth, July 31, 2004), Pench was among those selected to receive a share of the largesse. So are Mowgli's folks any better off as a result of it? Not at all; ecodevelopment has become another word for misery for the predominantly tribal people who stay in the villages in the buffer zone of Pench.
Salae -- a village of about 500 Gond tribals -- is about a km from the sanctuary. People here practice subsistence agriculture and depend on monsoons for irrigation water and on the forest department for work. The forest provides them tendua, mahua and fuelwood. The village bhumka do docctor, visits the forest to collect the numerous herbs, nuts and fruit. The villagers consult this doctor for all their health-related problems; the nearest government health centre is in Gouari -- ten km away.

Ecodevelopment began in Salae in 1997. But the term remains a mystery to its residents even today. Press them a little and they will tell you that the forest department installed nine biogas plants in their village. The plants were meant to generate cooking gas from cow dung and help wean off the villagers from their traditional dependence on fuelwood from forests. But Salae's residents have little use for them. Ask anyone in the village and you will hear this: "Operating these plants requires water, how can we afford that when there is hardly enough drinking water for us." Salae's only source of water is a well, half a km away.

Some villagers will also tell you that they were given saplings of oranges, bamboo and lime trees for Rs 10 each. And then with a wistful smile they will inform you that most of these saplings withered away just after a year: there was no water for them.

Then you notice the wide road that runs through Salae -- the forest department claims to have built it -- and for a while you might feel that ecodevelopment has actually done some good to the village. The villagers will immediately set you right: "The forest officers wanted to make their rounds of the village in their vehicles and so this road." And after this, their litany of woes will most certainly burst out: "Men are migrating to Nagpur and nearby towns for employment. During the monsoons, we practice agriculture and for the rest of the year we only get work as casual labourers on construction sites in towns. There is no compensation when wild animals from the reserve damage our crops. On the contrary, hefty fines are imposed if our animals stray into the park. Sometimes we are even put behind bars. We were harassed before the project and are still harassed. Salae had a water problem before ecodevelopment and we still have this problem."
Tikadirayat -- a small village of 145 Gonds whose boundary touches the sanctuary -- does not have a water problem. But that is small consolation. Before ecodevelopment started, villagers here visited the park for firewood, fruit and other forest produce quite regularly; they continue to do so even today. So what has changed? "Before this project, we were merely fined on going into the jungle, now we are arrested," the villagers say. Most adults in the village lament that they are arrested two to three times every year. Some also complain that they have worked with the forest department but have not been paid for it. And then there are complaints galore about crop depredations. One villager puts it all quite pithily, "If the numbers of wild animals increases, our crops will be destroyed even more. As it is, occasionally tigers take our cattle away."


Durgapur village, two km from the sanctuary has accommodated fifteen Gond families who 'moved out' of Alikatta -- a village within the sanctuary. The village is right on the banks of the river Pench and these fifteen families had good agricultural land where they grew rice, maize and wheat. But why did they move out? In 1993, a dam was built near their village and their village was flooded and then wild animals from the park started destroying their crops. The villagers did not have much choice after all. Besides, the forest department also promised them money, good irrigated land, wells and a dam if they moved out. They have got nothing of that. Of course, the forest department will tell you that they gave each family five or six acres (2-2.5 hecatres) of land -- that is unfertile and hardly a substitute for the fertile tracts in Alikatta. These 'voluntary evacuatees' also have severe water problems but the forest department has forgotten all its promises of providing wells and irrigated water. It did remember them briefly -- a little after ecodevelopment started -- and said that very soon Durgapur would have ponds and wells. But the villagers are yet to see any of these.

What they did get from ecodevelopment were six biogas plants -- three of them actually work! The fifteen families were also given a pressure cooker each. And their women folk were told that they could learn sewing at a centre four kilometres away; there were sewing machines and bicycles for those who attended the course. So, some women went ahead and attended the training programme but the promised bounties are yet to materialise.

It's clear that villagers in the buffer zone of Pench National Park were not even consulted when the ecodevelopment project was planned. Gond culture and identity has been a given short shrift even though the national park is in a Fifth Schedule area. While the forest has become out of bounds for the tribals, much wildlife habitat has been submerged by a dam built near the reserve by the governments of Maharashtra and Madhya Pradesh. Along with Mowgli's folks, the tigers in Pench are not safe at all.

In Rudyard Kipling's Jungle Book, Mowgli is a young boy who grows up talking to denizens of the jungle. Clearly, our government thinks that Mowgli's folks are incapable of such friendly relations with the forest. But then Mowgli was just a fictional character.

Anjoli Bandyopadhyay is an independent researcher. She thanks Samata and the Forest People's Program for their support