In search of an alternative

In search of an alternative 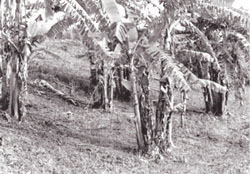 the Karbi Anglong district in Assam, the homeland of the Karbi tribe, is on the brink of an economic and ecological crisis. A high rate of population growth and overuse of land for shifting cultivation known as jhumming have led to alternative means of increasing productivity. While earlier, the jhum cycle consisted of 20-30 years, it has now come down to three-five years. Consequently, some of the Karbis are turning to permanent cultivation and also adopting measures to check soil erosion.

With an area of 10,003 sq km, the Karbi Anglong hills district is dissected by three major tributaries of the Brahmaputra river - Kapili, Jamuna and Dhansiri. The tribal population of the district is dominated by the Karbis who belong to the Indo-Mongoloid group and speak a mixture of Tibetan and Burmese languages.
Karbi Anglong's economy is based on agriculture. An overwhelming majority of the workforce (89.9 per cent of workers) is engaged in agriculture as cultivators and agricultural labourers. However, the basic agricultural practice, especially among the Karbis, is jhumming.

The jhumming process begins in the middle of February with the felling of trees and other plants in sloped fields. In the next phase called the migekiai, dried plants are burnt. The burnt matter is then cleared and the fields are hoed in order to prepare them for sowing. Just after pre-monsoon showers in late April, when the ashes settle down, seeds are sown by the dibbling method (scattering by hand). The crops raised in a typical jhum field during April to January include rice, maize, millets, sesame, potato, pumpkin, cotton, castor, mustard, ginger and a variety of vegetables.

The performance of jhumming is largely dependent on the natural fertility of soil and on rainwater. Since the yield of individual crops remains low in jhumming, there has been a notable shift towards sedentary wet cultivation in recent years. Even then, most of the Karbis still opt for jhumming for several reasons: a large number of crops can be grown in a single field during an agricultural year; the same field can be cultivated for at least two consecutive years and jhumming fulfils the needs of the jhumias (jhum cultivators) who require crop produce continuously throughout the year instead of a single dominant crop in a specific season.
There has been a sharp decline in the jhum cycle in recent years. With the growing pressure of population on the limited usable land, the scope of regeneration of plants in jhum fields has become too limited to check negative results like soil erosion and to regain natural fertility of the soil.

However, some of the relatively advanced jhumias have now adopted certain soil conservation measures on their own in order to protect their jhum fields from further degradation. Many of them have started planting bamboos in some of the jhum fields. They also cultivate maize and some root crops in the same field for at least two-three years before the bamboo groves get well expanded. Moreover, bananas are also planted in the lower margins of the jhum fields so as to check the outflow of soil from the fields. Further, horticulture is also gaining popularity especially among large landholders, which helps transform jhumming gradually into permanent cultivation.

Nevertheless, it cannot be denied that there is an urgent need to evolve a practical and acceptable package aimed at improving the overall condition of the jhumias so as to enable them to carry on the traditional agricultural practice of jhumming in an environment-friendly and sustainable way.