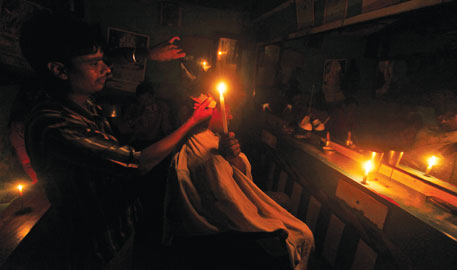 Towards July-end, when extreme heat and the late arrival of monsoons caused power consumption to reach record levels, peak supply fell short of demand and grids across India failed. It was the most severe power outage in memory, but is not likely to be a one-off incident. As the world faces the challenges of global warming, energy availability will become less certain and the scenario will worsen. A study by the Asian Development Bank (ADB) warns that the energy sector, commonly associated with greenhouse gas emissions, is vulnerable to changes in climate.

It assessed the impact of climate change on power sector in Asia-Pacific and found much of the energy infrastructure is located in areas where weather pattern may become increasingly variable. It identifies India, Bangladesh, Cambodia, the Philippines, Nepal, Myanmar, Vietnam, Papua New Guinea and Indonesia as high-risk countries.

According to the World Business Council on Sustainable Development, global energy demand by 2050 could double or triple as population rises and developing countries expand their economies and overcome poverty. Electricity demand in Asia is growing rapidly, with a projected average increase of 3.4 per cent annually through 2030, and this will require an investment of US $3.3-4.6 trillion, says the ADB report.

The increasing demand will be met majorly by coal-fired power plants. This is because thermal sources will drive growth, which is an imperative for developing countries. In India, only 67.3 per cent people has access to electricity as per the 2011 census. Coal-fired power plants account for 55 per cent of the country’s installed capacity, according to a report by the Working Group on Power for the 12th Five Year Plan. The report also predicts there will be a shortfall in availability of coal, which the government would have to meet through imports. However, it is feared that the gap will only increase, because climate change will impact mining activities as well as power plant infrastructure.

The scenario will be the same across the Asia-Pacific region, where despite growth of renewable energy, coal-based power is expected to account for nearly 80 per cent of the energy use in 2030.

Rainfall: too much, too little

Going by precedents, too much rainfall can degrade the quality of coal stockpiles by increasing moisture content. It can also affect mining and transportation of coal. In 2010, heavy rainfall in Korea inundated more than 30 coal mines and washed away hundreds of thousands of tonnes of coal from some 40 coal yards. Pumping equipment became defunct due to lack of electricity. Coal transportation came to a halt as bridges and rail lines were damaged by landslides. Similarly, in Indonesia, heavy rains and flooding in Kalimantan in late 2010 and early 2012 shut down mines, reduced output and affected coal transport. There are concerns that changing weather patterns may spread rain more equally throughout the year, with no dry season to make up for wet season losses.

Oil and gas facilities will not be spared either. According to the ADB report, low-lying coastal areas such as Jamnagar in India and Jurong Island in Singapore, which house critical oil and gas facilities, could face increased flooding, sea level rise, storm surges, ground subsistence and erosion. Even though pipelines are considered to be the safest method of transporting oil and natural gas, flooding and resulting soil erosion can damage valves, pump stations and other equipment.

The power plants will suffer even in the event of decreased rainfall. Even though the water requirement in power plants depends on the power generation and cooling technologies and their capacity, the amount of water required will still be considerable. But projects do not factor in the imminent water stress at present. “Thermal power plants work on the basis of economics. Although water is an important component of environmental impact assessments (EIAs), they do not quite focus on weather variability and possible impacts, which they should,” says A K Ghosh, advisor, Quality Council of India, which gives accreditation to EIA consultants.

Hydropower plants will also be directly affected by any changes in precipitation and temperature. As reservoir capacity gets affected because of lower snow melt or lower river flow, hydropower generation will dwindle. The impact will be severe on small hydropower projects as they depend on seasonal rivers, which can dry up quickly with higher temperatures and recurring droughts. But none of these impacts are taken into consideration while designing hydropower plants, notes a paper on climate change, disasters and electricity generation published by Strengthening Climate Resilience, a programme that aims to build communities’ resilience to disasters.

On the nuclear energy front, availability of freshwater and safety are issues of primary concern. An initial evaluation of the 2011 Fukushima-Daichii nuclear plant accident, by Massachusetts Institute of Technology in the US, shows it is crucial to choose sites that are away from highly seismic areas and coasts. Since seawater is corrosive, freshwater is required for the cooling of the nuclear reactors. Any freshwater stress will thus affect the output of power plants and even lead to closure of reactors, the report says.

In 2003 and 2006, as heat waves gripped France, it led to the limiting of output or closure of 17 nuclear plants. Seventy-seven per cent of France’s electricity comes from nuclear power. In 2009, France faced a shortfall of about eight gigawatts (1 GW equals 1,000 MW) of nuclear power and was forced to import electricity. The same year as heat waves gripped other parts of Europe, it threatened the stability of the national and regional electricity supply.

Even renewable sources of energy like wind and solar photovoltaic power, biomass and biofuels could be hit. While solar photovoltaic technologies could be impacted by changes in cloud regimes, variation in photosynthesis or plant’s physiological interaction, often driven by changes in carbon dioxide concentration, could alter the energy density of biomass and the power generated from it.

Apart from affecting electricity generation, high ambient temperatures and storms can damage transmission and distribution grids as well, causing power loss. And all this will happen when demand for electricity will soar due to rising temperatures.

Inadequate attention to these impacts can increase the long-term costs of investments in the energy sector and increase the probability of failure under climate stress, warns the ADB report.

It suggests adaptation measures, which include more robust designs of power plants; air or low-water cooling systems; inclusion of extra components in control systems which can be used in case of failure of an existing component; improved supply and end-use efficiency. ADB also recommends more robust operation and maintenance procedures, decentralised local planning, integration of adaptation and mitigation planning and integrating power sector planning with that of other sectors such as water supply and improved localised models to predict storms and flood hazards.

There are many who advocate that the solution to the threat of climate change lies in moving away from fossil fuels. But it is not clear what technologies will provide impetus for such change or how much time such transitions will take to implement. The existing investments and plans for power generation should therefore fully account for climate change and, where cost-effective and practical, adopt approaches that are resilient to these projected changes.