India, and not Bharat

Why the mainstream media prefers the former, and not the farmer

India, and not Bharat 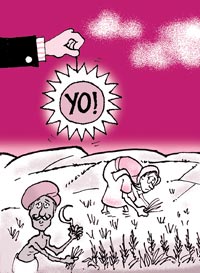 Why are the largest-circulated newspapers and magazines and the most widely-viewed television channels so focused on what is happening first in the metros and then in the larger cities, to the almost near-exclusion of developments that impact rural areas? There has to be a major natural calamity (flood, famine or fire) or some unspeakable atrocity (gang rape, stripping of a woman in public, a couple getting lynched for having a relationship outside their caste and so on) before Bharat enters the antenna of our media organizations.

At a superficial level, this city-centric insularity among media personnel -- including senior journalists and the bosses of the marketing departments in publications and television companies -- can be easily explained. There are many individuals in media organizations who sincerely believe (rightly or wrongly) that their constituents (readers and viewers) are located in cities and are, therefore, more concerned about what is happening at their backdoor and not in some remote village. Thus, the prominence given in the media to dumbed-down accounts of fashion shows, new boutiques and parties thrown by the glitterati. If, on occasions, stories on bijli, sarak and pani are given prominence, it is simply because these too directly concern urban elites though it affects the poor in cities much more.

Reports on how irrigation systems are working, or not, corruption in government-run rural development programmes, women seeking empowerment through better education and health-care and the struggles of the underprivileged are just not considered interesting enough in comparison to stories on pornography and spam on the internet or the latest range of wines offered by five-star hotels. The reality of the countryside -- hard, harsh and even pathetic -- can be conveniently ignored in favour of a fancy freak-out, fast cars and even faster females. The short point simply is that the mainstream media tends to reflect what it thinks its audience wants. So if the urban elites of this country are insensitive to the under-privileged, this callousness gets reflected in the priorities of the media.


This argument is, however, valid only up to a point. It would be foolish to believe that most of those who live in India's urban areas are completely impervious to what happens in the rural hinterland. It is common knowledge that while agriculture accounts for a fourth of the country's gross domestic product, it directly or indirectly provides livelihood to 60 per cent of the population. If executives in multinationals manufacturing fast-moving consumer goods understand this basic fact about India, why indeed should editors downplay stories on agriculture? Unless, that is, one is talking about a cretinous bunch of journos and their employers.

Consider telecommunications, often lauded as a shining example of a sector where the entry of private players has worked wonders for the consumer. Call charges are down, telephone connections are available on demand and a mobile will soon no longer remain an accessory of the well-off. That's one side of the story. What is not so well publicized is that out of the 6,07,491 villages in the country, close to one lakh (to be precise, 99,339) villages did not have a single phone till the end of 2002. Whereas private providers of basic telephone services had committed themselves to installing as many as 98,000 phones in villages by March 2002 (that is, one out of ten phones installed), they instead preferred to pay paltry fines instead of setting up phones in rural areas.

Yet this story is not considered as "sexy" as an article on the special features of the latest hand-held gizmo. A Sony Ericsson P-900 mobile phone is priced at around Rs 45,000. This is equal to the amount one-fourth of Indians (or not less than 250 million) have to survive on for at least three months. India lives in her villages. Right. So said the "father of the nation" Mohandas Karamchand Gandhi. Though it is still fairly fashionable to quote him, most in the media frankly don't give a damn.