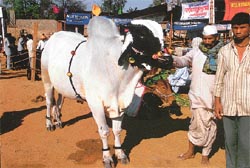 The gathering is a strange mix of cultures, a capsular representation of India's cultural and biological diversity. It is January 26, 2000, and the National Livestock and Poultry Show is underway on the grounds outside New Delhi's Pragati Maidan. It bears the mark of a typical government event, reminding the urban Indian mind of the days when Doordarshan was the only television channel and every evening meant 'Krishi Darshan', the dreadfully boring programme on agriculture. Announcers at the fair use stock phrases and common lines out of cheap poetry.

And then he appears. His cotton lungi rolled up to the knees, a blue, tattered check shirt, bare feet and a white cloth tied around the head, a sad excuse for a turban. He stops you, pointing to the brochure in your hand. It is a handout from the animal husbandry department of Andhra Pradesh, bearing a picture of a bull.

With shimmering eyes and white teeth that contrast with a dark face, the man speaks something in Telugu. Then reason gets the better of excitement. He resorts to a mixture of gestures and words that a north Indian may comprehend. "Srinivasan Reddy," says he, with a hand beating his chest. Okay, that's his name. "Prakasam district, Andhra Pradesh," he utters, with a hand pointing southwards, where home is. "Ongole," he points to the picture of the bull, after having snatched the brochure. " Hamara " (ours), he concludes in Hindi. And disappears in the din.

So, what's special about this Ongole? "It is the tallest, hardiest cattle breed of the world, and has been around since the early days of civilisation," says Kethineni Venkateswarulu, a farmer from Guntur district of Andhra Pradesh. How does he know? "The sculptures on the walls of ancient temples show Ongole bulls," he explains. With pride breaking through the innumerable wrinkles on his modest face, he tells you that Lord Shiva, the mightiest Hindu god who is beyond time and space, rides an Ongole. Nandi? Yes, the most famous bull of India, depicted in statues outside millions of temples of Lord Shiva, is an Ongole. Now, how many Hindus know that ?

And then the farmer shows his prize pair of bullocks. Both are well over six feet (about two metres) in height. They can plough 6-7 acres (2.5-2.8 hectares) of land in one day or pull a cart with four tonnes of load. Why doesn't he use a tractor? "Only the rich farmers can afford tractors. Ongole cattle need very little fodder if you consider their size." Another farmer who owns prize Ongole bulls says a team of breeders from Brazil visiting the fair offered Rs 2 lakh for each of his bulls. "They use this breed for beef because it grows big so very fast, eats so little and has a lot of resistance to disease. They buy off the best animals at fairs like this. But it is different for us. These bulls help me earn my living," says Venkateswarulu.

If you think that only the poor take interest in animals, think again. Meet Rajiv Khurana, second-generation cattle breeder and director of the Indo Dairyherd Improvement Centre in Rohtak, Haryana, which he claims was India's first bank for frozen bovine semen in the private sector. He has a passion for the Sahiwal cattle breed and the Murrah breed of buffalo, both native to Punjab. With all the looks of the urban rich, Khurana's sons Abhijeet, 9, and Yuvaraj, 7, wear jeans, Nike sneakers, snazzy pullovers and talk in public school English. They take you to Raja, a huge Sahiwal bull, and explain the nuances of animal care as if it is a math sum that they have solved. Khurana says Sahiwal is one of the best milch breeds in the world, and the government has done nothing to preserve it -- on the contrary, its crossbreeding programmes have actually polluted the best Sahiwal strains in the country, he says. Animal husbandry officials are wary of him and say that he is a clever businessman. He buys any good animals that he spots and makes their semen available in his bank.

Meanwhile, Balasaheb Vikhe Patil, the Union minister of state for finance and member of Parliament from Nasik in Maharashtra, has arrived on a customary visit. The entire officialdom starts walking behind him in obeisance. He addresses Manik Nivrati Yadav, a farmer from Hasegaonwadi village in Ausa taluka of Latur district, Maharashtra. Yadav's huge bull, named Raja, has a black head, while the rest of the body is white. This breed is called Deoni. But the minister is not interested in the animal. Speaking in Marathi, he asks Yadav: "Aren't there tractors in your region? Do you still want to own bullocks?" His hands folded in a servile gesture that has become almost congenital in rural India after being handed down several generations, Yadav replies: "We can't do without these animals, saheb , tractors or no tractors."

After the minister leaves, Yadav quips: "Tractors don't give milk, and they don't run on crop residue. Our area is hilly, and animals provide traction in places where tractors can't even reach. Raja is a prize bull. He can pull as much as two average bulls and his mother used to give 15 litres of milk per day. Apart from the cash prizes he wins, a lot of farmers get their cows mated with him. I earn Rs 50 per service. He may look big but he's never hurt a soul. My little son, much too young to have a driver's licence, can handle Raja. Most of all, a tractor can never return the affection and loyalty that Raja gives my family." Yadav spreads a sheet on the ground, pats Raja, and implores him to sit. Raja obliges.

As Yadav gets busy, B S Borgaonkar, a veterinarian and breeder with the state animal husbandry department in Latur, explains the story behind the Deoni breed, which has won the national cattle championship 17 times over. "About 100 years ago, the Nizam of Hyderabad wanted a strong and hardy cattle breed to haul his army. A facility was set up in Deoni village of what is now Maharashtra. The Nizam's people got the choicest animals of the Gir breed of Gujarat, known for its strength, and crossbred it with Dangi, a breed native to Nasik that is known for being very hardy and possessing good stamina. Through careful selection of the crossbred animals, a special breed was created and named after the village of its development. It has all the good qualities of both the breeds and none of the undesirable ones."

One may ask, are all native cattle breeds this versatile. No. Some are extremely specialised. Take Khillar, for example, known as the horse among cattle -- a veritable sports breed. Khillar bulls are raced with horses in parts of Sholapur district of Maharashtra. The breed is used for quick transport and is not very good at hauling a lot of weight. It can be marked out by its tall, slim build, and by its horns, which arch back to its neck and then turn upwards. "The horns are shaped like the sword of Shivaji Maharaj," points out Sukhdeo Ranganath Dhole of Pirachi Kuroli village in Pandarpur taluka , Sholapur district, Maharashtra, drawing attention to the most revered figure of the state.

"If you want to make out the pedigree of Khillar, check the space between the two horns where they emerge from the head. It should not be wider than two fingers," he clarifies. Pointing to his Khillar bull named Housha, whose aerodynamic looks can surely put a scarlet Ferrari to shame, he lights up, "He's real quick. He has won several races, reaping cash rewards of up to Rs 51,000. But he is a bit of a one-man animal and gets temperamental with others. I take care of him mostly." There is a lemon pierced into the tip of each horn to ward off the evil eye.

Dhole is reasonably well off, and can afford a tractor. So, why take the trouble of keeping Housha? "Ours is the sugarcane belt. After the crop grows up, we need to get inside the fields for several operations like weeding. Tractors can't go in. Bullocks can. That's why the Khillar cattle population in our region has been unaffected by tractors."

His close friend Ahmed Bagwan sits right next to him. The owner of a truck business, Bagwan leaves behind his trade and drives the truck himself when Housha goes for a competition. "You have to be careful while driving so as not to hurt him. I never go over 40 km/hour. You won't find a scratch on him." Dhole says Bagwan brings good luck. Sure enough, because Housha has been declared the national champion this year. Bagwan picks up his dhol and breaks into an enraptured dance.

According to the National Bureau of Animal Genetic Resources, Karnal, there are 27 cattle breeds and eight buffalo breeds in India. And then there are several breeds of other draught animals such as camels, horses, donkeys, yak and mithun. There have to be thousands of such stories for each breed.