India is smiling. The question is: are you in, or are you out? Have you signed up? India is smiling. For good reason. Never has living here been so high-rise and golfy. We cart ourselves around in diesel-guzzling SUVs, now indigenously produced. Our houses are happily awash with little red lights. Life is abuzz with little 'pings' and 'clicks': it's the washing machine. No, it's the coffee machine calling. It's the oven, silly! If you are still not part of the set that finds haute couture as indispensable as bungy-jumping, get cracking. Get the vinaigrette dressing (ranch will also do). Think mall now. Do the do, and the doo-doo. India is partying: How can you not make the mark? 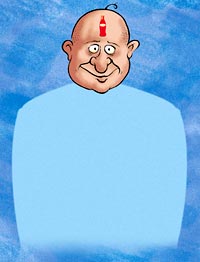 Honey, I shrunk the other world!

Advertising thrives on simplistic and emphatic theories. One such long-standing theory is segmentation . Advertising professionals are trained to look at the market place as a combination of various groups of human beings. Each of these groups are unique in the psychographic traits they display. This process allows professionals to mass-customise their messages. Interestingly, till the launch of Cable and Satellite (c&s) television in the early 1990s, mass media in this country didn't allow advertising messages to be truly segmented. Even a true-blue urbanite living in the southern most tip of Bombay (now Mumbai) would be exposed to messages going out to villagers in Abinashpur in central West Bengal. The urbanite would be watching the Sunday feature film on Doordarshan, just as his fellow countryman from Abinashpur would. Both would consume a toothpowder commercial that would talk about the special needs of personal hygiene in rural areas. Or, for that matter, rural community development needs through the classic 'we also make steel' campaign. c&s has made these images disappear from the collective consciousness of Urban India.


c&s is urban. And though the c&s household has Doordarshan tuned into their tv sets, it doesn't watch it. And now, segments are emerging within c&s. There are channels (Indian language ones) that seem to be watched by English speaking super elite urbanites. Then there are channels the middle class watch. Advertising (they say it is to be more effective) has created a hierarchy of channels:

• Doordarshan: both the National and the regional avatars.

The channels move from top to bottom in hierarchy, in how urban they are. The urban channels carry advertising clearly targeted at an urban audience. Now there is no chance of any leakage of non-urban imagery, or issues. Even if rural contexts are used, they'll be seen through the eyes of the urbanite. A case in point is the famous Aamir Khan Yaara da tashan ad for Coke. The villager amuses the city girls. And the villager is Aamir who is an urban sophisticate in real life. It's all play-acting. It's fun.

Are advertising images different in the so-called bottom of the hierarchy channels? Surprise! Surprise!


A great marketing need currently is to be able to expand consuming markets from urban areas to rural areas. A great many urban brands are now operating rural strategies. But advertising is not created specifically for these markets. Reason? Another pet theory. Rural markets see urban images as destination images. They desire urban! So, when you're selling a cream for chapped heels to the rural audience, they apparently buy the sophisticated imagery along with the cream!

Thus the imagery doesn't change. But what changes is the economics. You'll find media segmentation actually working in terms of price points. Top end c&s will carry the ad for the expensive chapped heel cream. And Doordarshan regional will carry the cheaper product (sometimes along with the expensive one's ads.) But, as the advertising professional will explain, while the product might be cheaper, imagery can't. And as we have said before, urban imagery is the destination imagery!

There is one fact much larger than all this. Indian advertising seems to be obsessed with the urban young. What gets fused here with the urban as destination theory is the theory that the 40-year olds today are much younger than the 40-year olds of yesteryears . Most of the models used are in their late teens (or: able bodied cricketers.) The situations are typically young and urban. And that possibly is the dominant advertising image that the country consumes today.

In the last decade, media developments and market forces have created an overwhelming urban and young bank of images that advertising beams. In this the rural life has become so other a world that -- if you study contemporary advertising -- even the rural population would like to give up!