An Indian government report that criticises and asks for several amendments in the Montreal Protocol is expected to generate heated debate among signatories meeting later this month. 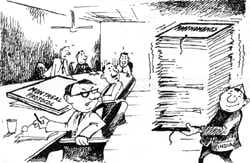 THE FOURTH Conference of Parties (CoP) to the Montreal Protocol, scheduled for later this month in Copenhagen, promises to be a hot affair. The government of India has prepared a detailed report on its strategy to phase out ozone-depleting substances, in which it has criticised the inequitable nature of the protocol and demanded several amendments. During the last CoP in London in l990, India, China and Brazil had vehemently opposed several elements of the protocol that the developing countries felt were discriminatory. India, in fact, did not sign the protocol until June 1992 when all the London amendments had been ratified.

The report, which was prepared for the Copenhagen CoP by a Ministry of Industry (MoI) task force chaired by N R Krishnan, has identified a number of problem areas in the protocol:

1. The protocol has fixed per capita consumption limits of developed and developing countries in an arbitrary manner without giving any reasons. The MoI report says even if India did not take any steps to control its consumption of chlorofluorocarbons (CFCs), its total consumption by the year 2000 will be just about 0.1 million tonnes, implying a per capita consumption of only 97 gm. On the other hand, USA, even with all efforts to control CFCs, will consume 2.2 million tonnes of CFC-11 and CFC-12 by 2000, that is, about 8.5 kg per person. The report suggests that after 2000, there should be a uniform norm for consumption of ozone depleting substances for all countries, which should be fixed in proportion to each country's population.

2. The protocol, despite the London amendments, treats developing countries as a homogeneous block despite their considerable socio-economic differences. Therefore, the report recommends that instead of separate phase-out schedules for specific substances, each developing country should be allowed to consume its own mix of hydrofluorocarbons (HFCs), CFCs and halons depending on its needs and economic conditions, provided it does not exceed the pre-determined per capita limit indicated in the Montreal Protocol -- 0.3 kg for developing countries. This flexibility would enable each country to adjust its phase-out schedule to suit its own specific requirements. The MoI report argues industrialised countries took all practical considerations into account while finalising their own phase-out schedules.

3. Developing countries should not be asked to get into a situation whereby they have to phase-out twice -- in the first instance, they would have to phase out CFCs and start using HCFC-22, which is a transitionary substitute with a low ozone depleting potential (ODP), but a greenhouse warming potential (GWP). In the next phase, HCFC-22 would have to be given up in favour of a substance with zero ODP and zero GWP. The report says it would be more appropriate for developing countries to insist on a five-year grace period rather than undergo economic disruption twice. The MoI report refers to US National Aeronautics and Space Administration (NASA) reports that indicate even if developing countries got a grace period of 15 years, the material difference to the stratospheric ozone layer would be limited.

Or else, the MoI report argues, India should insist that HCFC-22 be used as a transitional substance until 2040 even if global warming potential is raised later as an issue.

4. All countries, including developing countries, should have equal access to the "banked"' halons in the North on a per capita basis. The North has agreed to an early phase-out of halon production, relying on their large stocks of banked halon, which will be used for critical applications after the phase-out. The developing countries, on the other hand, have no such security.


Minister of state Kamal Nath, who is likely to head the Indian delegation to the Copenhagen CoP, is yet to finalise his strategy, but he clearly faces a major challenge. Apart from the issues of equity that India may raise at the meeting, industrialised countries have already put two major issues on the conference agenda.

Several countries, including USA, want the CFC phase-out to be brought forward from 2000 to 1995 in the wake of new evidence that shows a higher ozone loss over Antarctica than predicted earlier. Several countries want the phase-out schedule for developing countries also to be advanced from 2010 to at least 2005. A similar advancement in the phase-out of halons has been suggested by the UK. This would leave the developing countries with little time to plan their phase-out.

Several industrialised countries also want to renege on their commitment to set up a separate financial mechanism for the Montreal Protocol. Instead, they want to use the Global Environment Facility of the World Bank as the financial mechanism for the protocol. Many developing countries see this as a backing out of a contractual obligation but the European Community is insistent that the matter be discussed in Copenhagen.

The cost of switching over from CFCs to a transitional substance has been estimated by the MoI report at between US $1.4 billion (Rs 3500 crore) and US $2.45 billion (Rs 6000 crore), depending on the time of the switchover. Consumers will have to bear 80 to 85 per cent of this cost by scrapping their equipment. The useful life of CFC-based appliances have been assumed at l0-l5 years for purposes of estimating switchover costs, but rarely does an Indian customer throw away appliances like refrigerators that fast. Therefore, the real cost to the nation could be higher and this cost can be reduced only by using "drop in" substitutes to recharge appliances still in operation in 2010.

The switchover costs, says the MoI document, do not include expenses incurred in recovering and recycling CFCs, destroying substances and appliances which cannot be recycled or changing over from halons and cleaning agents for electronic equipment. It also excludes the social costs resulting from units closing down and the cost of disused plant and machinery.

India is one of the few developing countries that is self-reliant in its production of CFCs and CFC-based appliances. But India's existing plants cannot be used for manufacturing substitutes. The MoI report strongly warns against premature substitution without proper evaluation and recommends that until l997, when the base level of production for future years will be fixed under the Montreal Protocol, no constraints should be placed on production and this time should be used instead to evaluate substitutes that will suit Indian economic conditions. It also recommends a National Centre for Refrigeration and Air-Conditioning be set up to undertake R&D activities, including recovery and recycling technologies.