The king of dry grasslands has nowhere to go 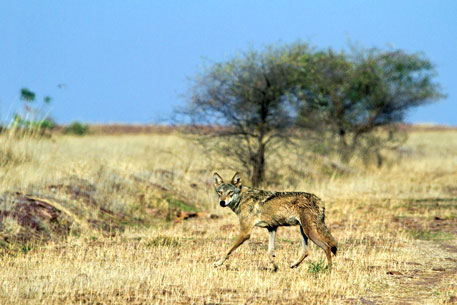 IMAGINE A WOLF in silhouette howling at the full moon. This visual cliché, used time and again in films, has earned the animal the reputation of a mythical creature from a dark and dangerous world. But why does a wolf howl?

“A wolf will be wasting time howling at the moon. It does so only to communicate with its pack,” says Bilal Habib, an expert on the animal with Wildlife Institute of India, Dehradun. Wolves, just like dogs, bark, whine, whimper, snarl, yelp and growl more often than they howl. But it is the howling that defines them. Every wolf howl is unique, just like every tiger has a unique stripe pattern on its body. Since the pack of wolves ranges over vast swathes of grasslands— about 200 sq km—for food, howling helps them locate and identify each other over great distances in open grasslands and reunite as well as establish territory among rival packs. The pack that howls together stays together, says Habib. Habib and his team are set to conduct a “sound capture and recapture experiment”, a first of its kind in India, to count the number of wolves in the country. At present, there is no population estimation for wolves in the subcontinent. In 2003, two genetic studies established that the subcontinent supports three wolf lineages—the peninsular Indian wolf that evolved 400,000 years ago, the Himalayan wolf that came into being 800,000 years ago, and the Tibetan wolf, which is now found in the north western Himalayan region in Kashmir. At the time the studies were conducted, 350 Himalayan wolves were thought to be in the wild and the population of peninsular Indian wolf was estimated to be between 1,000 and 3,000.

In the British India, wolves were considered vermins. According to historian Mahesh Rangarajan, records show that 200,000 wolf skins were collected between 1875 and 1925. This top predator on the grasslands has been persecuted for livestock depredation throughout history.

The impact of wolves on human lives and livelihoods in India is poorly understood, points out conservation scientist Roopa Krithivasan in her 2009 study “Human-Wolf Conflict in Human Dominated Landscapes of Ahmednagar district, Maharashtra”.

In fact, incidents of conflict between wolves and livestock owners are much higher in India than anywhere else. A major reason for this increasing conflicts is disappearance of native prey species. Livestock is now the only prey left for the wolves.

Besides, as the population grows, there is an increasing demand and pressure on grasslands to be converted for development, says Abi Tamim Vanak, principal investigator for Indian Savannah Project of Ashoka Trust for Ecology and Environment (ATREE). The project aims to create a countrywide map of dry grassland ecosystem in Andhra Pradesh (undivided), Karnataka, Madhya Pradesh and Maharashtra and design landscape-specific conservation management plans for the habitats. “Since grasslands are devoid of tree cover, the government classifies them as wastelands. Such conversions will further shrink the traditional habitats of wolf,” says Vanak. 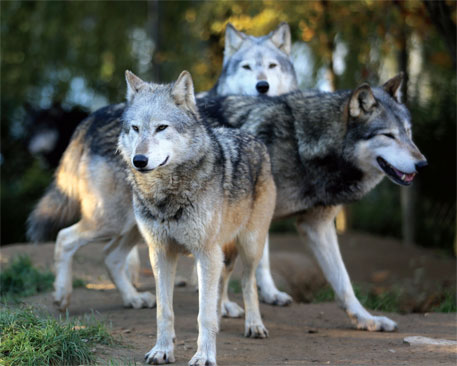 Grasslands also support agro-pastoralist communities and are home to critically endangered species, such as the great Indian bustard, lesser florican, Indian fox, striped hyena and black buck. “Yet dry grasslands do not receive attention from conservationists or policy makers,” Vanak adds. In Karnataka’s Chitradurga district, the pastoral communities have been opposing the diversion of 4,000 hectares of grasslands, known as Amrithmahal Kavals in Challakere taluk. These ancient grasslands are earmarked for industrial, institutional, infrastructure and projects. Land has been allocated to institutes such as Defence Research and Development Organisation, Indian Institute of Science, Bengaluru, Indian Space Research Organisation and Bhabha Atomic Research Centre. Environmentalists have challenged these projects in Karnataka High Court and the National Green Tribunal (Southern Zone) in Chennai.

People in Maharashtra often hum labad landga dhong kartay. This means, “Wolves are clever animals and will fool you with their devilish methods.” The song signifies a deep cultural relationship and understanding of the animal that the people of the time had. But this is no more the case. Although the government now grants wolves the highest protection by listing wolf as Schedule 1 species in the Wildlife Protection Act of 1972, the animal falls short in popularity compared to the big four—tiger, lion, elephant and rhinocerous. “Wolves cannot be protected by the forest department as it requires protecting vast areas,” says Habib.

A pack of wolves essentially consists of two animals—the alpha male and female which rule and breed. Considering that each pack needs about 200 sq km, there is no place for dispersal and forming newer packs in the ever shrinking landscape. The best ways to protect the species is through public awareness and by dispelling myths. “If only we could accept wolves like we have accepted dogs in our streets, then the wolves can hope to have a brighter future,” suggests Habib.

Compensation schemes to owners who lose livestock to wolves also needs to be improved. The Maharashtra forest department’s livestock compensation scheme for carnivore depredation, launched in 2001, has neither helped livestock owners nor the wolf. This is because the scheme requires the owner to produce the carcass of the kill or parts of it as proof to claim compensation. But unlike other carnivores, the wolf does not return to its kill if it is disturbed. This makes the wolf forfeit the animal it has killed and hunt again, aggravating the man-animal conflict. The department has now roped in conservation biologists from the Wildlife Conservation Society-India to look into grasslands, wolves and pastoralists who use the entire grassland in the state to make a robust scheme.

The wolf today is vilified and hunted, struggling to find a habitat. This is a far cry from the wolves in legends which raised orphaned children—from Romulus who built Rome to Mowgli in Rudyard Kipling’s Jungle Book. Will the wolf survive the brunt of human development? Ed Bangs, responsible for restoring the Grey wolf species in the US, says, “I’ve always said that the best wolf habitat resides in the human heart. You have to leave a little space for them to live.”