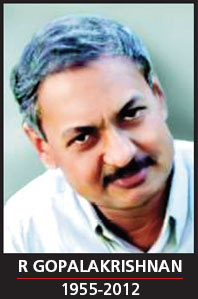 I first met R Gopalakrishnan when he was the district collector of Jhabua in Madhya Pradesh. This was in the 1980s when India was in the throes of a crippling drought. Jhabua looked like a moonscape—nothing but arid and thirsty land and desperate people. Anil Agarwal had gone there for a meeting of tribal groups, fighting for their rights over forestland. I had accompanied him. I have memories of the highest official in the district, Gopal, (as he was known to friends) coming to the gram sabha—the village assembly—sitting among us and hearing out people patiently. I cannot recall what he said, but I do remember his intent interest in the matter of land alienation and poverty.

Then a few years ago, while working in Delhi for the mission on drinking water he came often to meet Anil. They discussed how they could turn around this programme to provide water in all villages—looking particularly at the issue of governance so that water assets would be in the hands of communities. When he went on a study leave, he told Anil that he would look further at how concepts outlined in our book, Towards Green Villages, which argued that environmental regeneration was about rights and democracy, could be implemented on the ground.

Back in his home cadre in Madhya Pradesh and as a powerful secretary to the then chief minister, he played a crucial role in crafting new social and environmental programmes. Those were heady days. Anil and I returned to Jhabua in the mid-1990s to find barren hills being planted, protected and green. But it was not only that the watershed programme was a success. What was important was the innovation in governance, which connected fragmented bureaucracies and integrated the adjoining forestland with the water harvesting structure. This was also the time when the state deliberately worked on providing access to education (and not building schools) through an imaginative right to education scheme.

By 1999-2000, state expenditure on social services was almost 40 per cent of the plan budget and enrolment was up to 90 per cent. It made structural changes in the way bureaucracies conducted business by giving constitutional powers to the gram sabha, and so enabling it to become an instrument of local power. All in all this was a fascinating period of the practice of development.

In the 2003 state elections when the Digvijay Singh government lost, senior BJP leader Arun Jaitley had said this was because it was NGO-style—it spent more on social development, education and health—and not on roads or electricity. Without defending potholes, I would say that it is clear that development is often much more than what is easily visible. It is about building a strong foundation for livelihood and economic security by investing in people (through literacy and health programmes). And it is about building the rights-based enabling framework for action and governance in every village—constructing small footholds that become big steps into a better future. In most cases, development is doing what is the most obvious.

This is what Gopal was so good at. He worked in the laboratory of development and he used every possible experiment to see what would work best. And if it did not work, he would work at it again to find that right lever of change, or that right twist of an idea to push again. He never gave up.

For him, the aim was to make administration work. The key was to find innovative stroke of the pen reforms—as he loved to say—to make delivery possible.

This is why when he joined the Prime Minister’s Office in 2005 he worked on everything from the tribal rights bill to the rehabilitation bill and the innovation council. He pushed, he prodded, and he worked his way through the system. He never gave up on the system. For me, it is his kind of members of the Indian Administrative Service (IAS) who make power good. He also understood that the system needed all the help and more often, the ideas of the outside. He never hesitated to bring in what many would think are disagreeable voices into government. He believed in fermenting knowledge, but most of all, he believed that statecraft was about using this knowledge for deliberately designed action.

His death is a blow—for his friends like me who cherished his ideas, enthusiasm and his kindness. But his loss is a loss to all of us. In him we have lost a great practitioner of the belief that development can work for good. He will be badly missed.