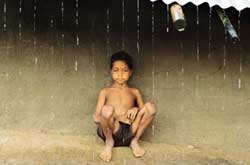 Right at the time of India's independence, it was recognised that the greatest threat to indigenous people is alienation of land. Without their land, they have no identity. Successive governments in India have failed to prevent alienation of tribal land, the law and the Constitution not withstanding. Now, the affairs involving Tata and Essar -- as well as the Salwa Judum campaign -- highlight how vulnerable tribals are to land alienation despite laws that are supposed to protect them. It explains why the Naxals are so powerful in Chhattisgarh and other tribal regions in the country.

Forty-four per cent of Chhattisgarh, or 135,224 sq km, is forest area (forest land and revenue forest). Access to this land requires permission under the Forest Conservation Act. The alternative for industrial development is to source private land, which is limited in the state.Only 36 per cent of the total land area is under cultivation, or under private ownership (see graphic Up for grabs). In the state's rural regions, people, especially Chhattisgarh's 32 per cent tribal population, are dependent on both agriculture and minor forest produce for their livelihoods.

But, most of these villagers are either marginal landowners or landless farmers with no official records to prove their right over the land they have been living on for centuries. When development and industrial projects like dams, factories and mines displace these landless farmers, they get no compensation, no job offers. Either way, both the landed and the officially landless lose not just their connection with the land, with which their culture and tradition is inextricably linked, but also their homes and their only means of livelihood.

As Chhattisgarh rushes headlong towards market-driven development, the state's increasingly marginalised tribal population is trampled underfoot by three forces the Naxal insurgents, the Salwa Judum militia and forces of industrialisation.


The Naxalites, who gained strength in Chhattisgarh's tribal districts over the past two decades partly due to a governance vacuum in these areas, seem to have lost connection with their ideology. This is especially true among the lower rung cadres, who block development, plunder, kill, violate and dominate the lives of the very tribals they claim to represent, in the name of providing justice. But their 'cause' gets fodder, as more land is alienated, the poor dispossessed and injustice done. Naxals feeds on callousness and there is much of it in Chhattisgarh. 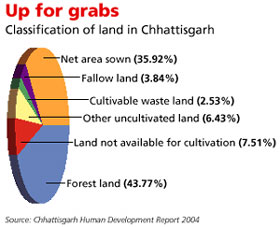 The state's response of arming villagers in the name of Salwa Judum has only led to an increasing spiral of violence and further land alienation of the tribals who have been forced to abandon their villages. It can be said that this war-like tension is creating conducive conditions for further land alienation of the people, this time for industrialisation. After all, the government of the new state is in a big hurry to play catch up in the game of industrialisation. These are rich lands, where poor people live. It is an accident of history that Chhattisgarh would like to forget and bury.


In the middle are the people -- caught between the guns of the Naxalite on the one hand and the coercion of the state on the other. In this atmosphere of insurgency, every protest is labelled and dismissed. Its protesters can be locked away, its voice supressed. This is how big industry can get its land quickly and with ease in these rich lands. It is interesting that industry denies that it has any hand in the coercion of the state. The meeting of the gram sabha, to get the consent of villagers, is the responsibility of the state. It is another matter that there is a clear case of collusion -- where industry and officials come together. But they will say that this is necessary. This is dangerous territory. Security forces are for the people's own good.

This is certainly not fooling the people. Their anger and helplessness plays into the hands of the Naxals, who are enemies of the state. Then more Salwa Judum soldiers are needed. The cycle of violence, not only continues but it is exacerbated.

In all this what is most pathetic is the Indian state. On the one hand, it arms the very poor to fight their own battles. On the other, it sides with private industry instead of protecting the public good. To call it a government would be a mockery.