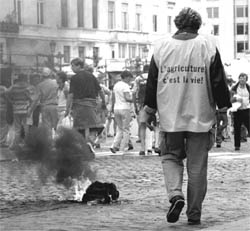 Human exposure to dioxins is mainly through food but the primary source is incinerators. There are more than 210 molecular variations of chlorinated dioxins and furans in emission from incinerators. Modern incinerators still emit large quantities of toxic chemicals and the ashes are dumped in landfills.

With heightened public awareness, an anti-incineration wave is sweeping across the world. A campaign against incinerators in Bangkok got initiated after Lancet reported that teenage boys living near incinerators had smaller testicles and female teens had smaller breasts.

In uk, the incinerator has become a political hot potato. The Labour and the Conservatives are at loggerheads over the incinerator issue. The Labour Party wants 100 new incinerators and the Conservative Party is planning a moratorium on new incinerators until "independent British scientific evidence proves they are safe". Recently, the uk government's National Society for Clean Air released a report and held a conference in which the uk authorities claimed "incineration with energy recovery is likely to play an increasing role in the future management of waste in the uk , to meet requirements in the ec Landfilling Directive to divert waste from landfill." The Friends of the Earth ( foe ) flayed it strongly terming it "grossly misleading". Said Mike Childs, foe s Campaigns director, "The truth is that we need to drastically improve recycling in this country."

The ground for the ongoing uk political battle was set by one of the Greenpeace International's report which quoted a study conducted on 70 municipal solid waste ( msw ) uk incinerators operating between 1974 and 1987 and 307 hospital waste incinerators from 1953 to 1980 identifying a two-fold increase in the cancer deaths in the children living nearby. The ten municipal waste incinerators operating in England in the past two years have breached their licences 553 times and faced just one prosecution.

In Japan, release of dioxins continued unabated from its 1,854 incinerators until people realised the havoc they were causing. A government study found that nearly 90 per cent of the dioxins released every year were formed during waste incineration. Simultaneously, the Japanese media reported a study carried on 415 mothers of new-borns across the country, that on an average the babies daily consumed almost six times the safe level of dioxins.

After establishing the link, residents close to incinerators voiced their ire. With the help of lawyers, the residents of Tokorozawa in northern Japan put pressure on the local administration to ground the incinerators. Recently the Shiga residents protested against the incinerator being installed in their locality. The Tokorozawa government was the first local government to pass an ordinance on dioxin emissions in March 1998. A study by Japan's environment ministry showed that nearly 90 per cent of the dioxins released annually are created during incineration. Immediately, Japan formulated its new dioxin reduction law suspending operations of all the incinerators in the country. The government has also set a national target of March 2003 to reduce domestic dioxin emissions by 90 per cent compared with 1997 levels.

Similarly in the us , incineration industry suffered setback after the epa reported that most incinerators were working below standards. People in the us , uk and Japan are demanding redesigning or closure of incinerators. The pressure is mounting and fast.