The situation of India's farmers has only become grimmer in the past decade, according to the latest National Sample Survey Office report 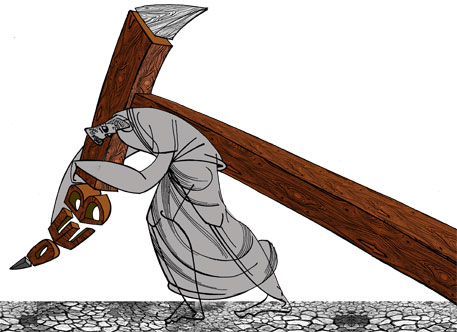 All this is according to the recent report of the National Sample Survey Office (NSSO), released on December 19, 2014. The report, titled ‘Situation Assessment Survey of Agricultural Households in India’, is based on a countrywide survey of 35,000 households by NSSO during 2012-2013.

The report comes after a gap of 10 years. The last Situation Assessment Survey by the NSSO was for 2002-03. In that year, 48.6 per cent of agricultural households were in debt. The average debt was Rs 12,585. And the yearly income from cultivation per household was Rs 11,628. At the time, India had a little less than 89.35 million agricultural households.

In fact, some think that the report may not even be reflecting the entire truth. “The NSSO survey gives us an idea of the existing situation but not the clear picture. In my opinion, it is not just 52 per cent agricultural households that are in debt but 80 per cent,” says Devinder Sharma, a food analyst. “If you adjust for inflation, on an average 7 per cent every year, farmers’ incomes have remained frozen in the past 10 years,” says Sharma.

The other main takeaway from the NSSO report is that the debt is being incurred by the the richer, more prosperous farmers. NSSO data shows that richer agricultural states like Kerala, Andhra Pradesh and Punjab have the highest average outstanding loans per agricultural household, whereas poorer states like Assam, Jharkhand and Chhattisgarh have the lowest amount of average outstanding loans.

Reasons behind the rise

The question then is: why have farmers’ debts increased? Ashok Gulati, former chairperson of Commission for Agricultural Costs and Prices (CACP), thinks outstanding loans to farmers are natural because of increasing intensification in agriculture. “As the intensification of agriculture increases, so does the loan.

The loan would be in the form of working capital, else the fixed capital will increase,” says Gulati. 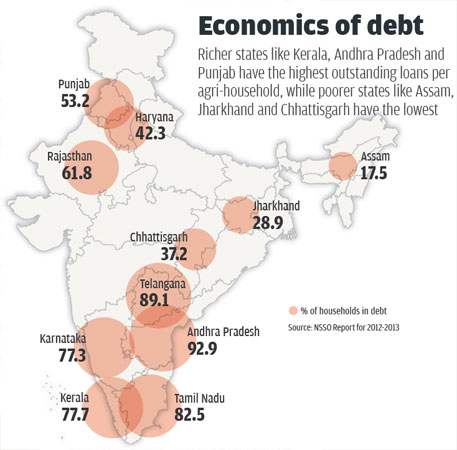 Others believe that this report is like the one in 2002-2003 and brings out the same systemic problems. They add that India has not learnt anything in the past one decade. One such issue is investment in the sector. Even as agriculture has intensified, investment in it is very less. Even the yearly agriculture budget is not more than that of the flagship employment guarantee programme, Mahatma Gandhi National Rural Employment Guarantee Act (MGNREGA).

Another reason debt has increased is that market price of agricultural produce is not commensurate with rising input cost. Dev says that two-thirds of farmers do not get minimum support price (MSP) for their crops and are compelled to sell their crops at lower rates in the open market.

“Seventy-five per cent of farmers in India sell in the open market at lower than fixed MSP. Only the farmers of Punjab and Haryana get MSP. The situation of other states is deplorable,” says Dev. “For instance, in 2009, when I was the chairperson of CACP, in states like Bihar, farmers used to get Rs 700- Rs 800 for paddy when the MSP was fixed at Rs 1,000.”

The reason for farmers not being able to get MSP, according to the NSSO data, is that large numbers of them are not even aware of it. As per the data, only 32 per cent of paddy farmers are aware of MSP. But even then, less than half are able to sell their produce in government procurement centres.

“In collusion with local traders and commission agents, government agencies delay in starting procurement centres by 30 to 50 days. In between, farmers sell their produce to traders at lower than minimum price,” says Yudhveer Singh, a farmers’ leader. 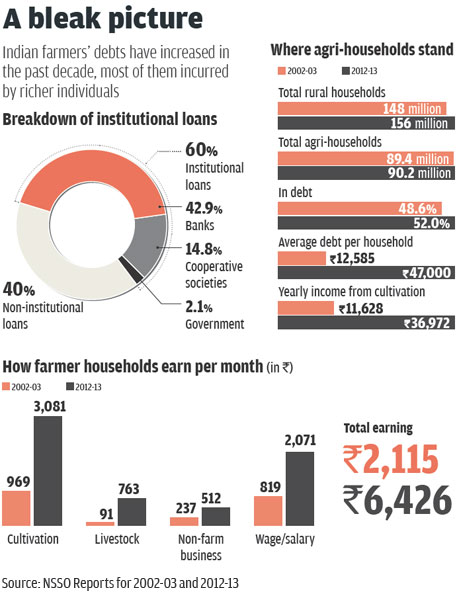 Gopal Naik, who teaches agro-economy at IIM Bangalore, feels that total collapse of agriculture extension centres could also be the reason behind the outstanding loans and poor conditions of farmers. “The agriculture extension centres have collapsed. At one time, they were helping and guiding farmers in a number of situations like making the best use of pesticide, fertiliser consumption and modern tech, and making them aware of MSP and the nearest procurement centres,” he says. “Now farmers depend on dealers and sellers of pesticide for all that, which results in losses and non-profitability,” he adds.

Naik believes the loan-waiving culture of the government also fuels continuation of outstanding loans. “Government policies are uncertain and increase the tendency of not repaying loans. It can also be a reason of increasing outstanding loans.encourage non-repayment of loans. The big land holders have high outstanding loans because they can easily access credit from institutions. They can access loan for other activities like setting poultry and other farms and wait till the government waives their loans,” says Naik.

The data shows that about 60 per cent of the outstanding loans were taken from institutional sources which included government (2.1 per cent), cooperative societies (14.8 per cent) and banks (42.9 per cent). But while the big farmers can afford to take loans, the small farmers still have no access to them.

“Credit from institutional sources is still a dream for small and marginal farmers,” says Jasveer Singh, a Bengaluru-based senior researcher who works on agricultural labourers’ issues. Anshuman Das, an activist who works with small farmers in Jharkhand, thinks that while they do not get institutional loans, they help in maintaining food security of the country.

“The small farmers practise farming which is different from that of big land holders. They try to keep investment low and innovate. For this, they do not access institutions for loans but are still dependent on non-institutional money lenders,” says Das.

The increasing debt and its skewed nature are surely driving many farmers away from agriculture. Agricultural house-holds are moving away to livestock, other agricultural activities, non-agricultural enterprises and wage employment. Data shows that 37 per cent of agricultural households no longer have agriculture as their principal source of income.

The contribution of agriculture in India’s GDP is nearly 18 per cent and it provides employment to nearly 56 per cent of the total workforce of the country. Despite this, as the NSSO report shows, the sector is no longer the first preference of rural households in India. It is heading towards a huge debt crisis and will need serious policy intervention instead of an ad-hoc approach.