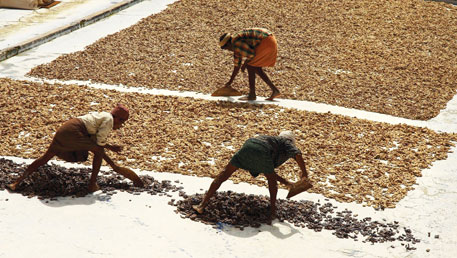 GINGER CULTIVATIONin Karnataka, mainly done by migrant farmers from Kerala, is catching on after a brief hiatus. Ginger is increasingly being grown in the Western Ghats districts of Uttara Kannada, Dakshina Kannada, Hassan, Shimoga, Chikkamagaluru, Udupi, Kodagu and Mysore, comprising the Malenadu region.

And it is not only the migrant farmers who are cultivating ginger. Native farmers, too, are turning to the cash crop due to its high market price. “In the last season, I earned Rs 24 lakh from one hectare of ginger cultivation. My investment was just Rs 4 lakh since it was my own land,” says N R Lankesh, a farmer in Shikaripurataluk in Shimoga.

What the farmers are ignoring is the harmful effect of ginger cultivation on the environment. Ginger is prone to rhizome rot viral disease. Since farmers do not want to risk crop failure, they use large quantities of chemicals—pesticides, herbicides, fungicides, insecticides and fertilisers—to prevent crop diseases and increase yield. Although a plot of land is leased for three to five years, farmers cultivate their crop for only a year and then move to newer pastures, leaving behind an infertile plot of land laced with pesticides (see ‘Why ginger farmers keep moving’,). Such shifting cultivation is leading to large-scale environmental degradation in the Western Ghats, a biodiversity hotspot and a UNESCO World Heritage Site.

Last year, a study conducted by the Centre for Ecological Sciences (CES) under the Indian Institute of Sciences, Bengaluru, found that indiscriminate use of chemicals has led to the loss of biodiversity and contamination of soil, rivers, lakes, streams and wetlands. “This has had adverse impacts on humans, cattle, flora, fauna and aquatic life,” says T V Ramachandra, senior scientist at CES and lead author of the study.

Fish, crabs and frogs are disappearing from streams and lakes close to the ginger farms, while honey bees are abandoning their hives in forests. Rivers such as the Varada, Kumudvati, Tunga and the Bhadra are polluted by chemical residues from ginger fields. “Water from these rivers is used for irrigation as well as for drinking,” says Nandish S, an organic paddy farmer in Shikaripura.

Activists point out that in ginger-cultivating areas like Banavasi in Dakshina Kannada district, doctors are increasingly getting cases of allergies and illnesses related to the brain, heart, intestine and lungs. However, no study has been conducted by the state to establish whether these diseases are due to chemical use in ginger farms. “Besides health problems, increasing ginger cultivation is ruining traditional crop practices in Malenadu,” says Anant Hegde Ashisara, president of Vrikshalaksha Andolana, Karnataka, a non-profit working for environment protection, which had commissioned the CES study.

More than 400 hectares (ha) of forestland in Malenadu is under ginger cultivation. Last year, at least 13,000 farmer groups from Kerala cultivated ginger on around 50,000 ha, shows data from the Kerala Ginger Growers’ Association. In Shikaripura, area under ginger increased from 5,200 ha in 2013 to 6,000 ha in 2014. Food crops, mainly paddy and maize, are being increasingly replaced by ginger. M Viswanath, deputy director, horticulture, Shimoga, says that in 2014, ginger replaced about 2,000 ha of maize in the district. 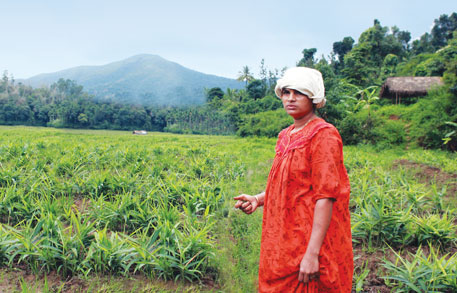 Hegde blames migrant farmers for this dangerous trend. “About 10 years ago, farmers from Kerala started ginger cultivation in the core areas of forests in Dakshina Kannada and Kodagu districts. This led to encroachment and degradation of the forest ecosystem,” he says in the study.

Sibi Thomas, a 35-year-old farmer from Kerala’s Wayanad district, owns a 10-hectare ginger farm in Shimoga district. He started ginger cultivation in his home town and subsequently shifted his farming to Kodagu, Dakshina Kannada and Shimoga. “Unlike Kerala, vast stretches of land are available in Karnataka on lease for farming and labour is cheap. Districts such as Shimoga are really good for growing ginger as water is aplenty, soil is fertile and climate is suitable,” he says.

The migrant farmers cross the border to Karnataka to grow their crop and leave once they reap the profits of the harvest, during February-April, only to return in the next planting season, which begins before the southwest monsoon. “While the migrant farmers go back to their state with the rich harvest without paying any tax, they leave behind a plethora of environmental problems,” says Vivek Cariappa, an organic farmer from H D Kotetaluk in Mysore.

No crackdown on pesticide sale

The state government has done little to check the damage. While 34 pesticides are banned in the state, many of these are still sold in local shops to ginger farmers. Manjunath S, who runs a fertilisers and chemicals shop in Shikaripura, says that his business has gone up by 60-70 per cent in the past five years. He attributes this to ginger cultivation.

The government has entrusted drug controllers with the task of monitoring chemical shops to check the sale of pesticides in the state. But activists point out that monitoring hardly takes place. Pesticides worth Rs 2 crore are sold in Malenadu every year, mentions the study. Officials disagree. “No banned pesticides or other chemicals are sold in Karnataka. These are brought by the migrant farmers from Kerala,” counters K B Dundi, joint director, plantation crops, state department of horticulture.

CES has proposed measures to mitigate the hazards of ginger farming. One of them is stopping the trading of banned chemicals. The study also suggests that the forest department should restrict areas under ginger cultivation in eco-sensitive zones. They should urge district agriculture centres and agriculture universities and institutes to help farmers shift from chemical-intensive farming to organic ginger farming.