Is cycling a crime?

Is cycling a crime? 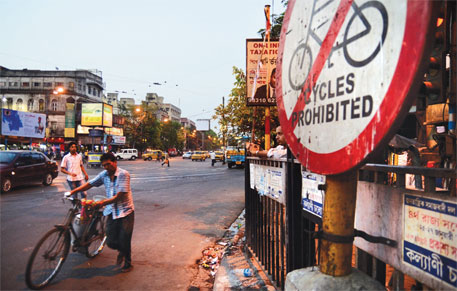 Teeming with cars and SUVs, the ever busy Eastern Metropolitan Bypass in Kolkata is off limits for Arvind Thakur. Until three months ago, Thakur would cycle 17 kilometres from his home on the southern tip of the city to reach Maa Ranisati Valet Service where he worked as a driver. Trouble began when the Kolkata Traffic Police erected signposts at different crossings on the bypass—a cycle painted in black with a thick red line cutting across saying “cycles prohibited”. One morning the police confiscated Thakur’s cycle while he was on his way to work. He had to pay Rs 100 to get it back. Since then Thakur started avoiding the bypass.

The practice of penalising cyclists in Kolkata has been around for a few years now. On August 11, 2008, the traffic department issued a notification making 38 major roads in the city off limits for cyclists. “...with the approval of the state government, I, Gautam Mohan Chakrabarti, Commissioner of Police, Kolkata, with a view to providing for safe and uninterrupted movement of vehicular traffic, do hereby order that no bicycle shall ply or remain standing between 09.00 hrs and 19.00 hrs on all days on the following roads...,” reads the terse order.

The amount was Rs 70 two years ago. No voucher mentioning the offence or a seizure list is given to cyclists. All that the cyclist is issued with is a small piece of paper stamped by the traffic guard (see picture below). Besides, since 2008 the city traffic police have whimsically added more roads, including the Eastern Metropolitan Bypass, to the list of 38 notified no-cycle roads.

When Down To Earth brought the matter to the notice of Dilip Kumar Adak, Deputy Commissioner of Police in charge of traffic, he feigned ignorance. “The existing notification means cycles will be seized and sent to the dumping ground if they come into the main carriageways,” Adak said, assuring that he would check the allegation of cyclists being penalised. He also said that the department plans to issue another notification adding more roads to the list of 38. 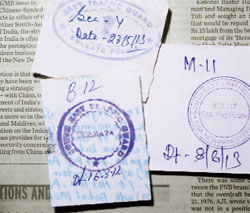 The notification issued by the Kolkata traffic police has no parallel anywhere else. Globally, Sri Lanka, China, UK, Germany and Japan are promoting non-motorised forms of transport such as cycling and walking. Amsterdam, the densely populated capital of the Netherlands, with a population of 800,000, boasts of 880,000 cycles. Even in India, several cities, including Delhi, Mumbai, Pune and Rajkot, are promoting cycling either by creating dedicated tracks or docking points where one can hire and park cycles.

For an overwhelming mass of people in Kolkata, as in other Indian cities, cycles are indispensable. Data of the Union Ministry of Urban Development shows people in Kolkata make nearly 2.5 million cycle trips a day, second only to Delhi. From petty traders and suppliers to carpenters and masons, from the milk man and newspaper vendor to office clerks and courier delivery boys, the middle- and lower-middle classes depend on cycles. 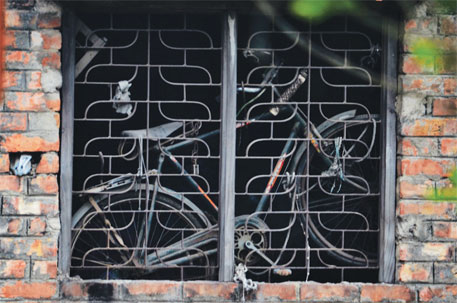 A visit to busy traffic intersections in Kolkata—Ruby, Ballygunje Phari or Moulali—shows that the number of cyclists has not reduced since the police commissioner’s notification, but their attitude has changed. Before approaching the traffic signals on no-cycle roads, they get off and walk with their cycles, sheepishly, like petty criminals trying to slip through. Samar Das, a street vendor, says thanks to a spinal problem, he no longer rides but walks with his cycle with a load of puffed rice from Howrah Station to Surya Sen Street. “I have paid Rs 80 to Rs 100 to the traffic police on several occasions. Lately, they have spared me as I walk with my cycle,” says Das. Harimohan Pal, an ink supplier to printing presses, has been cycling in the city for over four decades. He makes sure to keep Rs 100 in his pocket to pay a spot fine, just in case, and save his cycle from being seized.

Last year, a group of people under the banner of Cycle Samaj staged protests against the notification. “The police tell us that cycles are slow moving and impede traffic speed, causing accidents,” says Alok Dutta, a group member. “But Kolkata’s average traffic speed is slow. On a cycle it takes me much less time than a car to travel long distances as I can take shortcuts through winding lanes.” Dutta recounts that the traffic police have stopped him at least 30 times in the past five years but each time he refused to pay, arguing that non issuance of receipts by the traffic police is akin to theft. 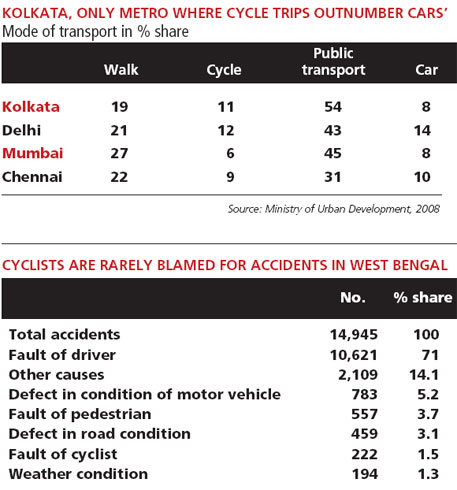 Samik Sarkar, an activist-journalist in Kolkata who was part of the protests, asks, “Why is Kolkata prohibiting cycles when it is the cheapest, healthiest and the most environment-friendly mode of transport?” Even car-heavy Delhi or congested Mumbai do not treat cyclists the way Kolkata does, he says.

Anvita Arora, urban transport planner and director of Innovative Transport Solutions in Delhi, says the notification contravenes Central guidelines like the National Urban Transport policy of 2006 that encourage non-motorised forms of transport like cycling. In fact, Arora adds, in 2012 the Supreme Court quashed the plea of the civic authorities of Delhi to regulate and cap the number of cycle rickshaws to ease road congestion. In the landmark case filed by Delhi non-profit Manushi, Justice G S Singhvi asked the government counsel, “Do you dare confiscate and junk cars, the way you do with rickshaws? Do you even dare confiscate and destroy cars of those owners who indulge in drunken driving and mow down people? We know your mindset and how you treat the poor.” 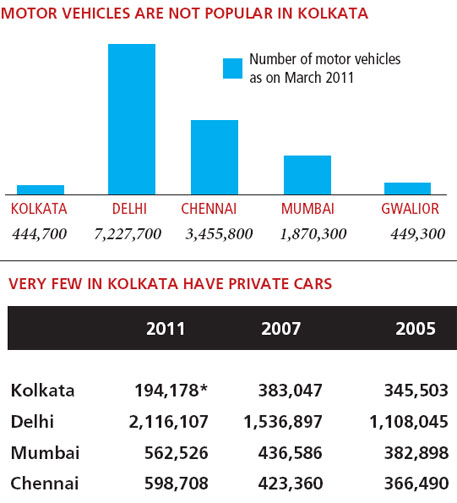 When Down To Earth spoke to Alapan Bandopadhyay, transport secretary of West Bengal, to find out how cycles fit into the state’s transport policy he spoke in officialese: “Walking and cycling are important provided they are integrated in the traffic and transportation plan that is managed by the police.” Does that mean cycling is not integrated into the state’s transport plan? “Please allow me to rest at that,” he said, ending the brief telephonic conversation.

After coming to power in 2011, Chief Minister Mamata Banerjee repeatedly spoke of her plans to turn Kolkata into London. Her government might want to look at London Mayor’s vision for cycling released in March 2013. “Cycling will be treated not as niche, marginal or an afterthought, but as what it is: an integral part of the transport network, with the capital spending, road space and traffic planners’ attention befitting that role,” wrote an excited Boris Jonson, “... at the very heart of this strategy is my belief that helping cycling will not just help cyclists. It will create better places for everyone. It means less traffic, more trees, more places to sit and eat a sandwich. It means new life, new vitality and lower crime on underused streets. It means more seats on the Tube, less competition for parking place and fewer cars in front of yours at the lights.”