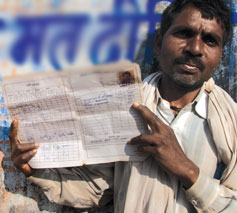 Madhya Pradesh is set to overhaul its public distribution system. It has decided to issue PDS users in the state with biometric cards so that no one can impersonate or fake identity. It will also replace food grain with food coupons. In August last year the state signed a Rs 250-crore deal with HCL Infosystems, an information technology company, to set up a biometricbased card system for PDS. This is the country’s largest such initiative and is being done in consonance with the Aadhaar programme. The state will hold a BPL survey in early 2011, after five years. The survey and biometric cards will decide who gets subsidised food grains.

Government officials say the new system is foolproof but people in villages do not buy the claim. Their typical response is: cards will be made for those who have been identified as BPL. Who will decide whom to include in the BPL category? “The coupon system will not solve the problem of siphoning away food grains meant for the poor to nondeserving people,” said Ashram Kumar, a community leader in Brashanpura village in Tikamgarh district, where a pilot study for the coupon system will be done in near future. And what about replacing food grain with cash? “Good. But if the BPL list is flawed, it will land up in wrong hands,” replied Kumar.

India’s move to adopt cash transfer has attracted polarised debate, especially after the Planning Commission targeted the food grain subsidies. The opposition is on two counts. First is that cash transfer requires precise identification of the poor, while India is struggling to get it right. Like the current model, it may leave a substantial number of poor out of the benefits. Second, many experts say a clinical adaptation of the Latin American model without addressing the conditions needed to implement conditional cash transfer will be disastrous. In Latin America cash transfer schemes are usually highly targeted and cater to a very small percentage of the population. “There is a good deal of illinformed enthusiasm about the model. There is no evidence that conditional cash transfer works better than conditional kind transfer,” said Jean Dreze, an economist and food rights activist. 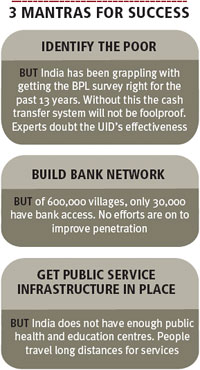 PDS suffers from targeting errors. The 61st round of the National Sample Survey shows only 39 per cent of the BPL families have ration cards, while 17 per cent of the families in the rich group do so. “Policy makers want to wash their hands off failures. How will cash transfer help if you still have a flawed list of the poor?” asked Mihir Shah, a member of the Planning Commission.

Most of the exclusion of the poor in Brazil and Mexico has taken place due to poor identification. The Indian government cites Aadhaar as a solution. “There is nothing inherent in the unique identification programme that will ensure an accurate BPL list,” said Shah. Brazil and India also have some key contextual differences. Brazil did not have expensive social programmes like in India when it started Bolsa Familia. “If India is to consider cash transfer, it will have to do away with traditional programmes,” said Vinod Vyasulu of Bengaluru-based research group Centre for Budget and Policy Studies.

Countries like Brazil and Mexico had substantial public health and education coverage. So when they incentivised use of the services, people could access them easily. In India outreach of basic necessities is poor. A conditional cash transfer scheme must invest in the services it incentivises. “An illusion has developed in some quarters that conditional cash transfer can replace public facilities by enabling recipients to buy health and education services from private providers. This is not how such schemes work in Brazil and Mexico. They have the facilities to begin with,” said Dreze. Despite being welfare states, Brazil and India differ a lot in institutional structures. As Vyasulu pointed out strong local governments are critical for conditional cash transfer. This is the missing link in India’s policy.

Given that India has fairly covered the education and health sectors with conditional cash transfer schemes, many believe food subsidies are the ultimate targets for wholesome cash transfer. It raises many questions. One of them is: will cash transfer help people tide over inflation? People get PDS grains at fixed prices irrespective of market fluctuation. Dreze points out another constrain: “While the PDS network is wide, we do not have a matching bank network required to send money.”