It's a selfish world

It's a selfish world 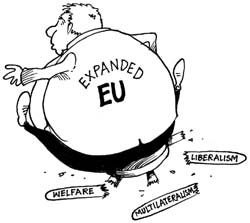 The us is not giving preference to bilateralism but to unilateralism, as bilateralism means two more or less equal partners and mutual respect. The changing (deteriorating) position of the eu is the result of a combination of factors. The environmental movement has not lost its strength in Europe. But other issues have come up more strongly, like unemployment due to a 'small' economic crisis and insecurity due to global tensions.

Moreover, some European business enterprises have now adapted a more reactionary strategy. A good example is the scaremongering and nihilistic campaign of the chemicals industry against the European Commission's intentions to formulate a new chemicals policy. The rules are aimed at putting Europe in the front line for public health and environmental protection. Ironically, when the commission recently put out its draft proposal, it was found to be heavily watered down.

A major problem for the eu is the nature of its political leadership right now. Berlusconi is no less than a disaster, and so is Aznar. Blair is obsessed by his role on the global theatre and has little attention for the eu. Schroeder has a major economic and political crisis at home. The Netherlands has completely stopped being a vanguard. Sweden is a disappointment -- while it had a good reputation before it joined the eu, it has now become shy. In several eu countries, conservative governments have replaced progressive governments during the last few years. This is the result of not more than 10 per cent of the electorate swinging from left to right. They might swing back as we have seen in the past. But the most worrying trend is in the uk, where the government (that was supposed to be progressive) has turned into a conservative force.

Another important concern is the enlargement of the eu with effect from May 1, 2004. None of the 10 new members, with the exception of Poland and Hungary, are ambitious to leave their mark on the global theatre. All 10 want accelerated economic development -- to catch up with the much richer 15 existing countries. This might prove problematic, considering the following statistics: eu will have some 25 per cent more members, but its gross domestic product (gdp) will increase by only six per cent. The enlargement will make the eu as a whole more conservative. It already has.

It was very good that a coalition of strong developing countries finally came into action during Cancun talks. The eu was shocked, and such a shock was necessary. The eu should take the coalition seriously and consider it as a discussion partner, or perhaps as an ally. But it should also realise that this group is not representing the interests of the poorest countries. There is no reason to believe that Brazil, China and India are less selfish than the eu. They will not fight harder for the interests of people in Africa.