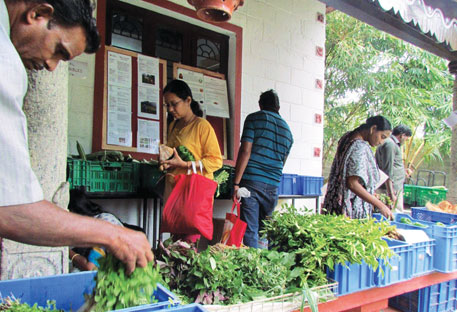 A FOOD SAFETY and Standards Authority of India (FSSAI) official walked into Restore, an organic food store at Kottivakkam in Chennai. He picked up a packet of rice off the shelf and noticed some bugs in it. “How can you sell groceries with bugs?” he asked. The staff told him their customers buy their goods precisely because of the bugs in them. The official was amused, but then asked to see the organic certificates of the farmers who supplied the store. The staff told him the supplying farmers did not have certification. Taken aback, the official asked, “How will your customers trust that your products are organic?”

“We told him our customers trust our products precisely because our farmers don’t have certificates but are part of our trust-network. The kind of customers we have would rather trust people than institutions and would rather support small farmers than big landlords and industrialists,” says Sangeetha Shriram, one of the founders of the store. The incident ended with the bemused official handing them their licence and buying a few products in the bargain.

But is organic certification the best way to get trusted organic food? Farmers, agriculture activists and those involved in marketing organic food think it is not. That is perhaps the reason several cities in India are seeing the rise of community-supported organic food marketing endeavours.

The best way to get authentic, trusted organic food, say those who deal in it, is to establish close contact between procurers, consumers and farmers. Restore, which has virtually become a household name in Chennai, relies on this practice.

“Initially, we would visit every single farm we procured from, and spend a whole day there, getting to know the farmer, his philosophy and practices,” says Shriram, “We got cheated a few times, but with time we developed an intuitive check-list of what to look out for. Two of the things were biodiversity on the farm and the process of preparing organic inputs.” 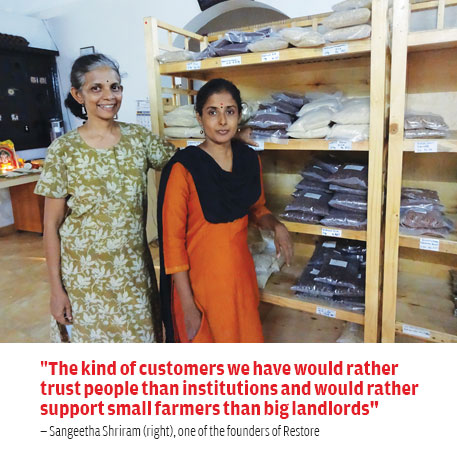 Farmers on their part also feel that selling food on trust works better.

R Jagannathan from farmer group Nalla Karai, which has become extremely popular in Chennai for its organic leafy vegetables, says, “Most of our customers are convinced because our greens are tastier than those available in the market.”

Dheeraj Pipada, farmer from village Wadgaon Kolhati in Aurangabad, Maharashtra, agrees. “Unless you are a really big producer company who wants to sell to corporates or go for exports, trust works better than certification.” Pipada is part of a group of 12 farmers who has started their own organic shop, Rich & Fresh, in Kothrud, Pune, two years ago.

Pipada’s group has certification under government’s Participatory Guarantee System (PGS) that certifies all crops grown organically on the farm and provides each farmer with an individual certificate. Pipada says big procurers often do not trust PGS and prefer certification from private agencies which costs up to Rs 30,000 per year.

Arti Pankharaj of the Centre for Sustainable Agriculture, who is helping farmers in Wardha, Maharashtra, convert to organic, says that nailing down cheating is difficult. “In our area farmers mostly go for PGS but even fellow farmers in a group find it difficult to tell when one member is cheating.” She thinks consumers are better off with trust chains. “A committed farmer will not cheat because she will find organic cultivation beneficial too,” she says.

One problem with certified organic food is that it becomes a premium niche product sold in swanky upmarket outlets out of the reach of the middle class. One of the main reasons trust marketing endeavours are succeeding is that they have managed to keep prices reasonable.

“We fix our prices in a way that is fair to the farmer as well as the customer,” says Shriram, “Our goods are certainly not cheap, but they don’t cost an arm and a leg either. And they remain stable.” This is particularly true for vegetable prices, she says, “Take tomatoes. Our price is Rs 38 a kg, irrespective of whether the market price is Rs 18 or Rs 80.”

Alpana Bose Tambe, a government employee in Wardha, Maharashtra, says, “There is a big difference in price between branded organic foods in supermarkets and food sold by grassroots organisations like the Gram Sewa Mandal. It is still priced higher than market food but you are sure you are getting good food.”

The stability in price also helps both farmers and consumers plan their production or spending more effectively.

Proof of the pudding

Any marketing endeavour’s success depends on consumer acceptance, and trust-based enterprises are proving their mettle on this count too. Restore, in existence since 2008, has a turnover of Rs 1 crore. Nalla Keerai and Rich & Fresh both do business worth Rs 3-4 lakh per month.

Kavitha Kuruganti of Alliance for Sustainable and Holistic Agriculture, a federation of organic farmer groups in India, says while it is not possible to get realistic estimate of the number of farmer groups and endeavours involved in trust-based organic food marketing in the country, numbers of both farmers and consumers are certainly growing.

“Finally,” says Vasant Futane, veteran organic farmer from village Rawala in Amravati district of Maharashtra, “Trust marketing is the only way ahead for making organic cultivation worthwhile to farmers and organic food products affordable to the common man.”