"His thought leads out of the prison of routinized, sterile, preconceived notions" 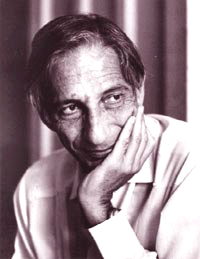 Ivan Illich, defrocked Catholic itinerant priest who spent a lifetime unmasking the pernicious hold of institutions and professionals on our lives, passed away in Bremen, Germany, on December 2, 2002. He was 76.

Perhaps the last of the great iconoclasts (Foucault, Bourdieu, Paul Goodman, Schumacher, among others) of his generation, Illich's controversial views on education, medicine, justice, work and development found manya sympathiser. However, they also brought him in head-on confrontation with the many "experts" he had chosen to denigrate.

In a perverse irony, he died to a deafening silence of the world -- the media, which he resolutely shunned and often chastised for its obeisance toso-called professionals, noticed his absence only belatedly, and that too rather perfunctorily. Indeed, most journals chose, wittingly or otherwise, to ignore him, as he did them. Needless to say, the Indian media radar didn't even register a blip.

Illich shot to fame in the 1970s with a series of intellectual molotov cocktails that brilliantly exposed the inherent failings of modern institutions such as schools and hospitals. In Deschooling Society, his most well-known work, he argued that "schooling...draws society into the trap of thinking that knowledge is hygienic, pure, respectable, deodorized, produced by human heads and amassed in stock..... [B]y making school compulsory, [people] are schooled to believe that the self-taught individual is to be discriminated against."

And in Medical Nemesis, he famously declared that "the medical establishment has become a major threat to health." He argued that expert systems like modern health obscure the political conditions that render society unhealthy; and that they tend to expropriate the power of individuals to heal themselves and to shape their environment. He coined the word "iatrogenesis" to describe the condition wherethe cure and the healer (read medicine and hospitals) themselves become sources of sickness.

With the same gusto and incisiveness, he went on to dissect other important preoccupations of modern life such as technological development (Tools for Conviviality), energy, transport and economic development (Energy and Equity), and work (The Right to Useful Employment and its Professional Enemies and Shadow Work). In 1971, he wrote his widely popular Celebration of Awareness, a grim elegy on progress and its follies. In an essay titled A Constitution for Cultural Revolution, he exhorted humanity to "learn a new language, a language that speaks not of development and underdevelopment but of true and false ideas about man, his needs, and his potential." To quote the concluding lines:

"Only a cultural and institutional revolution which reestablishes man's control over his environment can arrest the violence by which developmentof institutions is now imposed bya few for their own interest. Maybe Marx has said it better, criticizing Ricardo and his school: 'They want production to be limited to 'useful things,' but they forget that the production of too many useful things results in too many useless people.'"

But Illich's archaeology of modern institutions also attracted much criticism. For instance, Ian Lister described Illich as "an intellectual maverick who deals in metaphors and allegories." M Gajardo, who edited the Key Thinkers in Education published by unesco, criticised Illich's ideas as "founded essentially on intuition, without any appreciable reference to the results of socio-educational or learning research. His criticism evolves in a theoretical vacuum." Others have criticised Illich for overrating the importance of schools to the exclusion of perhaps more immediate influence of families, television and advertising, jobs and housing structures.

However, Mathias Finger and J M Asn, in their Adult Education at the Crossroads: Learning our way out, point out that "Illich is not against schools or hospitals as such, but once a certain threshold of institutionalization is reached, schools make people more stupid, while hospitals make them sick. And more generally, beyond a certain threshold of institutionalized expertise, more experts are counterproductive -- they produce the counter effect of what they set out to achieve."

Indeed, at a time when the leash of institutions and professionals on human lives has further tightened, Ivan Illich's call to deschool society couldn't be more relevant. Erich Fromm, the well-known author of To have or To be, underscored most eloquently theeternal value of Illich's ideas in his introduction to the latter's Celebration of Awareness. He writes: "The importance of his thoughts... lies in the fact that they have a liberating effect on the mind by showing new possibilities; they make the reader more alive because they open the door that leads out of the prison of routinized, sterile, preconceived notions."

Illich's detractors also often accused him of pedantic carping about progress without offering any alternatives. He had always ducked the question by retorting "I am not concerned withprescriptions."