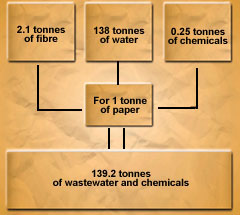 It is no surprise that the only Indian company that had an iso 14001 certificate even before the Green Ratings Project began has come out on top. But even the top-rated company has only scored 42.75 per cent.

J K Paper Mills ( jkpm ) is owned by J K Corp, and the plant is located in Jaykaypur town of Raygada district, Orissa. The mill has scored much higher than most others on corporate policy and management systems. It has a statement on environmental policy that is quite comprehensive and tries to address several environmental issues. The policy statement has been signed by the deputy managing director, who is a member of the board of directors. The policy has been formulated specifically for the paper mill at Raygada, and there is reason to believe that it is implemented at the unit level.The policy statement has also tried to take into account long-term sustainability by addressing issues such as raw material procurement, the production process and disposal of wastes and pollutants. But the policy statement does not detail issues relating to basic inputs, water, energy and chemicals.

When it comes to sourcing raw material, the company gets 55 per cent of its wood requirements from forests allotted by the government, though this is showing a decreasing trend. The company has undertaken farm forestry programmes in Orissa and Andhra Pradesh.

The fibre-use efficiency of the company is 44 per cent, whereas the maximum that can be achieved according to the rating criteria is 52.5 per cent. But the efficiency has been decreasing continuously mainly because the mill has not stablised with technology upgradation as yet. Similarly, the mill's average energy consumption has been increasing continuously, and the company has scored quite low in this department. The company's per unit water consumption stands at 138 tonnes. While this is lower than the average of Indian mills of similar type which use 250 tonnes, it is much higher than the minimum of 60 tonnes (for bleached paper) and 30 tonnes (for unbleached paper), which is techno-logically achievable. jkpm uses 112 kg of caustic soda per unit of pulp. The maximum according to the rating criteria is 100 kg. The per unit consumption of elemental chlorine is 12.2 kg, which is quite low. But this can be brought down to zero kg.

The mill has installed a new pulping process in the last quarter of 1998 at a cost of Rs 300 crore. In the future this will help the mill reach greater efficiencies in resource use. The mill is also installing a new bleaching system that is considered environment-friendly. Among the weaknesses of the company is the fact that it does not have a kiln to recover lime from sludge. Also, no substantial effort has been put into disposal of fly ash and lime sludge. And though the company shared information, there was a marked hesitancy in disclosing data.

The mill has the traditional problem of being too dependent on government sources for its forest-based raw material. This trend will have to change in the future if the mill wants to retain its top position.