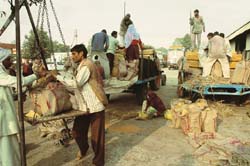 THE temptation to pick up one of the golden clumps of gur (jaggery) seemed overwhelming as we walked around Asia's largest gur market. But Pramod Kumar Jain, our companion, urged restraint. "Do not pick this up. I will get you the real thing," he said. Jain is a gur dealer at Naveen Mandi Sthal in Muzaffarnagar, Uttar Pradesh. We were at his work area trying to find out the traditional method of making gur--the real thing. The light golden clumps lying enticingly in the shops were not actually the ones we had come seeking, Jain told us.

However, it's this variety which does brisk business at Asia's largest wholesale gur market. Chemicals are added to it to make it more attractive. This gur can also be stored for long periods.

Id festivities were just over and most temporary gur-making units or kolhus that dot Muzaffarnagar had not resumed work. But smoke spiralling between sugarcane farms near Rathedi bypass was indication of a kolhu where people were back at work. We made our way there. Abrar Ahmad and his team were at work. Ahmad took us through the gur-making process while sweet-smelling mist from boiling sugarcane juice engulfed the area.

Before boiling, the cane is crushed in generator-operated machines and collected in a cement tank. A drain then takes it to a kadai (pan) at the furnace-end. The pan is the third in a series of three and the least hot. Once the juice is heated to the required temperature, it's transferred to the second pan and cleansed of impurities.

A solution made of stems of wild ladyfinger, locally called sukhlai (Abelmoschus spp.), is used in clarification. The sukhlai is crushed and put in water. Polymers from the stems make the water sticky. A can full of this sticky solution is added to the boiling sugarcane juice, it makes the impurities in the juice rise up and they are ladled off.

At this stage, chemicals get into the process to give the gur its preferred golden hue. A spoon each of sodium hydrosulphite (hydro) and sodium formaldehyde sulphoxylate (papri) and a capful of castor oil are added to the boiling syrup. They are supposed to rid it of impurities which the sukhlai solution cannot remove.

The clear syrup then gets concentrated and after the required consistency is reached, it's transferred to another pan right at the mouth of the furnace. This pan is the hottest of the three pans. Here the final concentration is done. The semi-solid product is then transferred to a flat platform, chak. Here it is cooled and a handful of phatki or alum is added to enhance the gur's colour.

The gooey stuff is shaped into various forms-- laddu, chaku or khurpa-- and then dried. The process takes about an hour.

Gur is classified into grades based on its molasses content. Traders verify this by a physical examination of the gur's texture.
"Sukhlai is safer as it does not stay in gur unlike chemicals," says Ahmad. It's the only additive in the traditional method. But Ahmad does not make the gur by this method. He has to use chemicals to satisfy the market. Ahmad adopts the traditional method only when local people ask him to make some for personal use. They also spice up the gur with dry fruits, black pepper, dried ginger coconut, and sometimes, even carrots.

But it's the golden-hued gur that's more in demand. "In popular perception, its colour and texture are indicators that all impurities have been removed," says Ajay Singhal, a Muzzafarnagar gur trader. Satisfying consumer preferences very often means going against rule books. For example, the Bureau of Indian Standards specifies that sulphur dioxide levels in gur should be below 50 parts per million. The level, however, very often goes much higher because of the indiscriminate use of hydro--the recommended limit is 35 g hydro per 1,000 litre of juice. Likewise, the use of phatki goes against the Muzaffarnagar mandi rules.

Gur is not exported. But that does not pinch the traders because consumption within the country makes up for it. Eighty per cent is used by distilleries. Units in non-sugarcane growing areas where liquid molasses is unavailable depend on its solid version, raskat. But some states do not allow import of raksat, and here distillers have to use gur.For example, distilleries in Gujarat depend solely only on gur. Chemicals are not a problem in the distillation process.

Gur's food value also makes it an item of demand. Punjab is one of the biggest consumers around 500 quintals go daily to Moga district in the state during the peak season.

Gur business has also spawned lucrative future trading. The working of the Vijai Beopar Chamber Limited, a futures market for gur in Muzaffarnagar, depends on this. During 2005-2006, a total dealing of Rs 3,799 crore was done at this centre, reveals Manohar Lal R Kalra, president of the chamber.

Gur making units make profits only when the sugar industry cannot consume all sugarcane. But that's always the case in Muzzafarnagar. So kolhus here operate for at least eight months every year. "The sugar industry does not have the capacity to use all the sugarcane grown in the country. The sugarcane farmer would have problems if there is no gur making," says Singhal. The process of turning sugarcane into gur is very efficient. Dried bagasse is used to heat up the furnace and the leftovers are sent to paper mills--another major industry in the area. The impurities ladled off during the clarification process are mixed with animal feed to make it nutritious.

Ahmed earns around Rs 5 lakh in the eight months his kolhu operates. He explains one round uses up around three quintals of sugarcane and produces 40 kg of gur. The kohlu works round the clock and produces about 15 quintals of gur. Around Rs 1.5 lakh is needed to set up the crusher and furnace. The land is rented at a yearly rate of Rs 1,600 per bigha (0.25 hectares). The 10 workers at the kolhu get at least Rs100 per day. This takes care of nearly 200 people in all their families.

All this, despite a recent slump in the gur industry's fortunes in Muzaffarnagar. This year, cold storages are full of last year's stocks, while the year's produce is making its way to the market. Once there were around 7,500 kolhus in the area. Now only about 2,500 remain and they provide livelihood to around a lakh. Another reason for the slump is that people in Madhya Pradesh have also taken up gur- making. Gur alone is not suffering. In the 1980s there were around 700 units making khandsari, there are just 27 now.