Bindeshwari, a scrap dealer in Punjab’s Ludhiana district, was asked to buy Cefzy-250 by the doctor treating his wife.

She had delivered a baby in the government civil hospital in June-end. The chemist at the hospital’s Jan Aushadhi Store gave Bindeshwari Ceftazidime, a generic version of Cefzy- 250; both drugs contain the same salt and are used for treating general infection in women post delivery. After a while Bindeshwari was back at the store clutching the injection vial.

“The doctor has returned the medicine. He said it will not work,” he told the chemist while handing over the packet. Bindeshwari then purchased Cefzy-250 from a private chemist. The branded drug cost him Rs 95 against the Rs 22 for its generic version. “I cannot distinguish between the two drugs. All I know is that I cannot risk the life of my wife and child. I will do as the doctor says,” said Bindeshwari. The explanation the doctor proffered was: “In many cases the generic drugs do not produce the desired effect in the expected time which branded ones do.”

Punjab is one of the eight states, along with Delhi and Rajasthan, where state health departments have issued specific orders to government doctors to prescribe only generic medicines. These are made available through special outlets opened after the launch of the Jan Aushadhi campaign in April 2008 by former Union chemical and fertilizer minister Ram Vilas Paswan. The aim of the scheme was to make available to people low-priced medicines equal in potency to branded drugs. The drugs are sourced by public sector pharmacies. But few government doctors prescribe them.

Jaipur has two Jan Aushadhi Stores (JAS) in Jaipuria hospital and Kanvatita hospital. Both stores look deserted. “It is very rare that a doctor prescribes generic medicines,” said Praveen Kumar Mangal, pharmacist at the JAS at Jaipuria hospital. N K Vashishtha, principal medical officer of the hospital, said it is difficult to monitor doctors. “Besides, most of the drugs are not available at the JAS,” he said.

The JAS scheme has made little progress in two years. There are 44 such stores in the country. This is just a drop in the ocean considering there are over 500,000 retail pharmacy shops in the country, said Chinu Srinivasan, managing trustee of Low Cost Standard Therapeutics. He said there should be at least one JAS in each taluka.

The Union chemical and fertilizer ministry, it is learnt, is planning to expand the number of JASs. It has also decided to tap small and medium enterprises (SMEs) in the pharma industry to shore up supply of generic medicines. There are about 6,000 such enterprises in India.

At present, only central public sector units are supplying generic medicines to the JASs. Besides, the government is also trying to revive the central units by providing assistance for repairs and replacement of machinery. The ministry has proposed a budget outlay of Rs 40 crore for its pharma units in 2010-2011.

The small enterprises are uncertain if the government proposal would benefit them. “Where are the JAS outlets? The existing stores sold drugs worth just Rs 2 crore last year against the total domestic sale of Rs 50,000 crore,” said Jagdeep Singh, general secretary of SME Pharma Industries Confederation. C M Gulhati, editor of the (MIMS), said the government should seriously focus on a public awareness campaign to popularise Jan Aushadhi stores.

“Unless patients are empowered, the scope of Jan Aushadhi stores would remain limited,” he said. 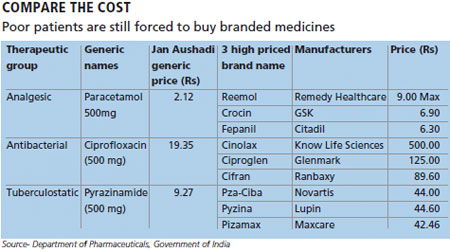