Joy of learning can be a pain

Joy of learning can be a pain 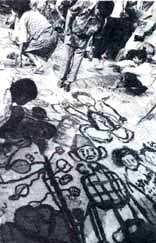 THE National Joy of Learning Festival for children opened on November 7, 1994, at New Delhi amidst much fanfare. The festival was jointly organised by the All India People's Science Network and the Bharat Gyan Vigyan Samiti (BGVS). Inaugurating the festival, Yashpal, former chairperson of the University Grants Commission, stressed, "Mazaa (fun) is very important. No scientist would work without it." But for many of the 1,000 children who attended, the festival was hardly fun.

The 8-day long festival was part of a programme launched this October "to make children optimistic about learning, to make it participatory, joyful and relevant for all," according to M P Parameswaran, secretary of the BGVS. The festival had 8 activity corners, where batches of 25 children were to learn by joy of learning.

One such corner, Science in the Kitchen, taught that a kitchen is a very exciting laboratory for children. Twelve-year-old Selvi from Tamil Nadu would have thought so, too, if she could understand what was happening. As the instructor held forth, Selvi gazed at her in total incomprehension -- she could not understand Hindi. "I'm sitting here because they told me to," she said.

In the Technology corner, where the functions of simple levers, gears and pulleys of a bicycle were demonstrated, 10 year-old Geetanjali Chandra from Tripura stared morosely at her toes. The Hindi lecture was lost on her since Geetanjali speaks only Bengali. As Satyadeepa from Tamil Nadu said through tears, "Everyone is so rude. They are ignoring us because we don't speak their language. I don't like it here." Rama Inayan, a BGVS volunteer from Tamil Nadu, concurred sadly, "I'll have to tell the children what was taught later at night. It'll be like tuition."

"There have been some lacunae in organising the event," admits Parameswaran. Poor organisation was evident at other levels, too. The scheduled morning milk breaks never materialised while hungry children waited hours for lunch in serpentine queues. The lapse proved traumatic for hundreds of children spending 8 days in an alien environment where the majority of people spoke a strange tongue and were too busy demonstrating enjoyable learning to give them more a cursory glance.

The contents of some corners also left much to be desired. Neeraj Kumar, a BGVS volunteer from Madhya Pradesh, was critical of the Creative Dance corner, "What's the use of making children wave their hands tamely up and down? Give them some drums or instruments and let them dance and move as they want. That is creative."

The Low-cost Science Experiments corner was hugely enjoyed by the children. Nanda Tulsi Ram from Delhi is obviously delighted with a small experiment she did with scraps of coloured cellophane. She is all smiles, excited by her discovery: "Put the red one behind the blue and you get purple!" Experiments were performed by the children, using easily available materials like paper, tyre tubes and batteries. The History Walk, where children were taken to Humayun's Tomb nearby, was also a hit.

There were informal corners on pottery, puppetry, library, kite-making and mask-making. Children could join whichever corner interested them. In the painting corner, children vented their ire against the system. Sumit Kapur from Delhi and his guest Ashok Kumar from Himachal Pradesh painted a boy in tears, next to an ogress-like teacher admonishing, "Padho (study)."

Puppetry and mask-making were also big draws. But not all children were free to do as they wished. Sangeeta Joshi, a 11-year-old from Dehradun, looked wistfully at the Puppetry corner. "The teacher told me to stay with the rest of my group here in carpentry or I might get lost," she said.

Inayan had another grouse against the festival. "What can one do in a corner in 90 minutes? By the time children settle down, the time is up. In festivals held in our state, we have half a day to every corner," she says. According to Krishna Kumar, the treasurer of the BGVS, "The festival is intended to demonstrate that learning can be fun." Unfortunately for many of the children, the festival was just a demonstration of the organisers' inefficiency and insensitivity. The alternate method, one that is supposed to be full of joy, seems nothing more than old wine in a new bottle, with a few frills added. Old wine or new, children continue to be treated like mindless cattle.