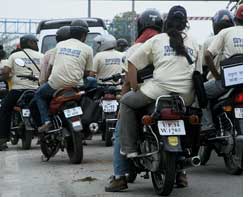 Biking along the Yamuna from Delhi to Agra, ravleen kaur hears constant calls for saving the river, but witnesses little action. Photographs by vaibhav raghunandan

The roaring of motorcycles shattered the early morning calm on the Yamuna floodplains in Delhi. On World Environment Day on June 5, a group of professionals, farmers, activists and journalists gathered for a bike rally along the river at the Yamuna Satyagraha site, where a bunch of farmers and activists have been campaigning against the construction of the Commonwealth Games Village on the riverbed for over 300 days.

As the river drifted into Faridabad its burden of sewage and industrial waste kept on increasing and the spectacular failure of the Yamuna Action Plan began to unfold.

In Dhadhasiya, 40 km from Delhi, a sewage treatment plant (stp) of 20 million litre per day capacity sprawled over 7 hectares made a great showpiece of the plan, but it was shut down for upgradation. Untreated sewage was being discharged into the river. "Who is interested in knowing where their daily muck is going?" said the stp contractor with a shrug. Even when the plant functions, it treats the sewage only partially. In not even one place we visited, stps were functional.


On the first night of the journey we slept in a temple of Tigaon village, 3 km from the river, in Faridabad. Heavy rainfall brought with it stench and mosquitoes which were effective in keeping everybody up and ready by 4 in the morning. The only source of inspiration throughout the night was the songs of fellow traveller Kishorilal Tomar. His land on the Yamuna floodplain in Delhi was acquired when Akshardham temple came up. Since then he has been tilling others' land. The campaign against the Games Village turned this 50-year-old farmer into a poet, composer and singer. Armed with an earthen pot, Kishorilal would fling himself into high-pitched singing in all the villages we went to. 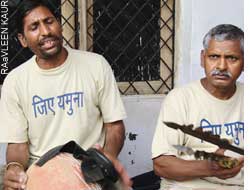 The next day took us to Manjhawli village in Ballabgarh. Dogs and cows easily crossing the river gave away its shallowness. A little ahead an embankment over Bhudiya Nala was being constructed. "You would think it's a project of national importance. Actually, 40 hectares have been bought on the floodplain for making a golf course, hence the embankment," said Ram Chandra of Manjhawli. To keep the villagers quiet, SRS Constructions, the company developing the golf course, was making roads in Manjhawli and nearby Akbarpur. "People are happy that the rates of land will go up and they will sell and leave. Who wants to do farming anyway? Once farming goes, the river will no more be a part of the social structure," he said.

A cow's body floated in Beduki Nala, 30 km from Manjhawli, and on the bank lied a skeleton. Some farmers have discovered benefits in using the polluted water. "When we use this water, we need less fertilizers because it comes from industries," said Satwant Kumar of Beduki village on the Haryana-Uttar Pradesh border.

The river is indeed getting estranged from society. Until 30 years ago, Kushak village in Haryana used to have a three-day fair of Peer Sidh Baba on its banks. "In the month of Baisakh, people from all over Haryana would come here to have a dip in the river and sell their wares near her. That used to be the time of water melons and jalebis. Then the water in the river receded and the pollution went up. Now the fair has practically died down, with nobody wanting a dip in the dirty water," said Gajraj Bainsla, sarpanch of Kushak.

Village after village accused Delhi of polluting the water. 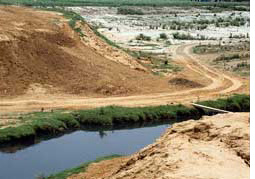 "There was a time when one dropped a coin and it could be seen on the floor of the river. Now even a human body will not be visible. All because of Delhi, which takes away all the river water for drinking and releases this dark, stinking filth for us," said Sukhbeer Mistry of Kushak. Later in Mathura we saw a coin diver struggling with grime to get a mouthful of coins--under water, coin divers find it convenient to collect coins in the mouth.

As the villagers collected around us, our leader and convenor of the Yamuna Jiye Abhiyan, Manoj Mishra, exhorted, "It is you all, the people of Haryana and Uttar Pradesh, who have to tell Delhi to stop polluting, else you will not give them any water from upstream." 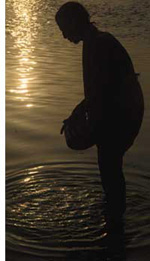 The next day our journey entered into the religious sphere. Now we were traversing the land of Krishna. An iskcon follower among us removed his footwear for the rest of the journey. It was June 8 and we were very close to Ganga Dushehra, the day when millions of devotees take a dip in the holy river. The religious fervour was at a heightened pitch, but only at few places did it transform into cleaning of the river, like at Vishram Ghat in Mathura.

From the pontoon bridge of Shergarh in the Braj region the Yamuna presented a different sight--and smell. For the first time during the journey, it did not stink. People considered it the benevolence of Krishna. Mishra said it was the river's self-cleansing capacity. "From Faridabad till here, there is no major town, so very little sewage has been thrown into the river," he said. The river rejuvenated with each passing village till Vrindavan, where we halted for the night. A little before Vrindavan, 50 cusecs of water from Ganga Nahar is released into the Yamuna to improve its water quality. But at Vrindavan Kosi Nala pours its muck and garbage into it. 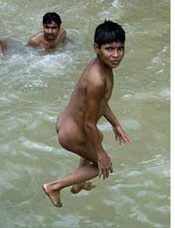 In the morning we took a boat ride around the ghats, most of which were 500 metres from the river, divided from it by a sand beach and a concrete road. "It is you people who have polluted the river. All the muck that comes down here is from Delhi. Even if Rs 30 crore of the Rs 400 crore spent on the Yamuna Action Plan were utilized, the Yamuna would have been much cleaner. Everybody just shouts about cleaning it; in the evening aarti, they chant prayers of Yamuna Maiya, but nobody takes a single step," said our boatman Hero Hiralal, who claims never to have stepped out of Braj, summarizing my entire journey. We heard this lament often during the journey.

The Yamuna was choking on silt, garbage and debris. "The thick layer of sand and plastic under water does not let it penetrate underground. The groundwater level has gone down from 30-40 feet eight years ago to below 150 feet. Most of the environment ministry funds are for awareness. What should be the next step after awareness?" asked Neeraj Saigal of ngo Food for Life, Vrindavan. Shrivatsa Goswami, the Mahant of Jaisingh Ghera, the erstwhile haveli of Maharaja Jai Singh of Jaipur in Vrindavan, told us how a road was built on the flood plain to the ashram of a prominent priest and how a ring road is being planned around Vrindavan, which will involve erecting pillars on the riverbed. "A river is the image of society. If it is polluted, the society is polluted. If religion can be used for corrupt purposes, why can't it be used for the cause of the river?" asked Goswami.

By the time it reached Mathura, the Yamuna looked feeble and tired. Gokul Barrage considerably reduced its current. Even the wells along the ghats had dried up. "The barrage was meant to improve water level in Mathura and Agra, but the level has plunged because of silt in the river," said Gopeshwarnath Chaturvedi of Shrikrishan Janmasthan Sewa Sansthan, Mathura.

As we approached Agra, the short respite from stench was over. And the image of the city, as Goswami said, reflected in the river. Mantola Nala, the drain that passed through the heritage corridor between the Taj Mahal and Agra Fort, presented the ugliest sight of the trip as it fell into the river. The foam was accompanied by waste from leather factories. And this when the sewage from the nala had just started going back to the stp after 15 days.

In violation of the Supreme Court order and the Water Act, sewage is often diverted into the river "due to old and worn out pumping stations and stps which do not work half the time", said Ravi Singh, an environmentalist. The city administration is now contemplating bringing drinking water to the city from the Ganga through a 130 km pipeline. There goes the Yamuna Action Plan. 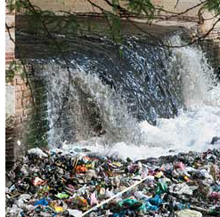 Though activists led us into the city in a procession, river conservation as a motive was lost somewhere along the way. During the next two days water and beverages were served to us in plastic glasses, which were thrown away on the riverbed, as were the used dry-leaf plates and plastic bowls. There was more talk and noise. Sabhas were organized to welcome the "team from Delhi" and hundreds of leaders and politicians launched into speeches. The journey, which had taken a religious turn from Shergarh, now went into the politics of an urbanized town. The wheel had turned a full circle.

The boatman's words came back to my mind as I looked at the river, black with filth and reduced to a trickle. How it covers the rest of its journey before finally merging into the Ganga at Sangam is difficult to comprehend. Perhaps it is the divinity attached to it.