Tour of a house that thrives on air circulation, saves energy cost 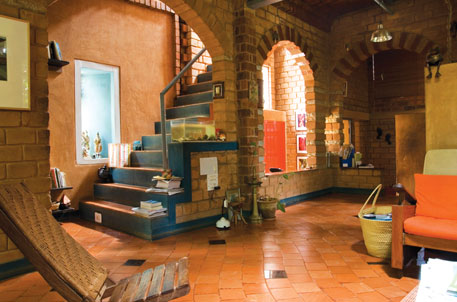 The white-painted section of the roof of Chitra Vishwanath’s residence-cum-office in Bengaluru is pleasantly warm. “Come, stand here,” she calls from a section where the roof is coloured sour yellow. A few steps away and it becomes blistering hot. “A white roof makes a difference of several degrees when it comes to indoor temperature,” says Vishwanath who is the principal architect and managing director of Biome Solutions, a green architecture firm.

Another section of the roof has been covered with sheets made of agricultural waste. They are placed a few inches above the concrete roof which prevents heating up of the surface.

There is more to keeping a house cool than just doing the roof, points out Vishwanath. Bengaluru is hot during daytime and cool at night, and it is humid throughout the year. “In such weather conditions it is important to keep the indoor air circulating,” she explains. A visit to Vishwanath’s residence in Vidyaranyapura gives an insight into her remark. On entry, the first thing one notices in her house are “basement windows” opening at the ground level. “A basement is a great way to keep the entire house cool.” She is right; the living room is cooler than an average house in the city during a hot and humid October afternoon. This despite no fans running in the room.

The interior focuses on space rather than walls. Large arches open out from the living room into the kitchen and the stairwell with no doors to obstruct the view. “We have not installed doors in most of the rooms,” says Vishwanath. Surprisingly, most of the rooms do not have the mandatory four walls either. “We have tried to dispense with walls and doors as much as possible unless there is a genuine need for privacy, like in my mother’s room,” she says.

Standing in the stairwell, one can look down into the basement, up at the arches that open into the bedrooms and the roof of the first (the only) floor. To ensure plenty of natural light inside the house, Vishwanath has given utmost importance to windows and ventilators.

Descending into the basement, one can feel the distinct change in temperature. “It is the coolest room in the house on a hot summer day,” says Vishwanath. Three of the basement walls have rows of wire mesh-covered windows above lintel level, all of which open into the garden at the ground level. “These basement windows control the temperature of the entire house by letting in cool air. If the weather is cold, simply close the windows and the whole house becomes warm,” she adds.

The arches, the open stairwell, and the large number of windows and ventilators let the hot air out, so that the basement windows keep drawing more cool air, preventing indoor temperature from rising. The arches are particularly important, says Vishwanath. “They serve two purposes. First, unlike concrete beams, the arches let the weight of the roof come onto the walls, which reduces use of concrete and cement. Second, they help dispense with unnecessary walls and doors and ensure continuity of air flow.” For instance, in the living room on the ground floor, two inner walls have been replaced with four arches, two of which open into the kitchen and the other two into the stairwell.

From the roof of the first floor rise several chimney-like structures with slanting roofs which are, in fact, skylights. Apart from letting in light, tiny sections of these structures have been removed and replaced with wire meshes to make ventilators. The ceilings of the bedrooms are high (four metres) which furthers the cooling effect and allows for a partial mezzanine space. “This space can be utilised as work or sleeping space.” It is, however, not possible to maintain uniform temperature throughout the house. Vishwanath says, “One has to make a choice of where he or she wants to be. On a hot afternoon, for instance, the basement is the coolest place (it is never more than 23°C), and on a cold night, the mezzanine above the bedroom is the warmest place.”

The roof is another highlight of the house. A part of it is covered with a vegetable patch. “Earlier, we used to grow rice in a much larger space, but now that most of the trees surrounding the house have grown tall and shady, we removed part of the plots,” she says. The roof is also the seat of Vishwanath’s many ecological experiments, including a wastewater recycling unit that recycles bathwater for the garden, a model of waterless toilet, a solar cooker and a cement trough with water-plants growing in it.