With the US pulling out of the control of the Internet, the world is debating a multi-stakeholder model of governance 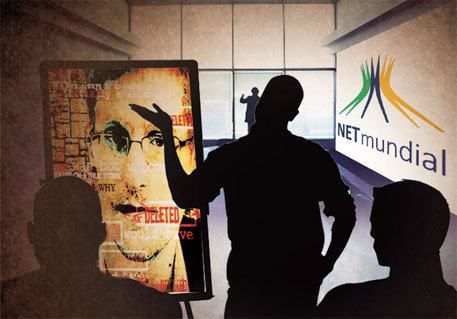 Like Banquo’s ghost, Edward Joseph Snowden will be a key figure at the Grand Hyatt in São Paulo, Brazil, where a crucial meeting to decide the future of the Internet is in the final stages of preparation. Snowden, holed up in Russia where he has sought asylum after the US termed him a traitor, will, of course, not be present at the conference—the Global Multistakeholder Meeting on the Future of Internet Governance, or NETmundial as called in Portuguese—at which India is one of the 12 co-host countries. But the ineffable presence of the computer professional, who blew the lid off a sweeping global surveillance programme by the US National Security Agency (NSA) and Britain’s Government Communications Headquarters (GCHQ), will haunt and shape the meeting which is aimed at breaking US dominance of the Internet.

At the heart of the issue is the erosion of the trust and confidence of Internet users worldwide in a system that had initially promised to be more democratic and ensure more equity and justice than in the current political and social structures of countries.

Snowden’s revelations of the colossal surveillance data mining programmes of NSA and the Five Eyes, a powerful espionage alliance of the US, UK, Australia, Canada and New Zealand, have galvanised countries into taking a fresh look at global Internet governance. Documents leaked by the whistleblower in 2013 exposed not just how widespread the spying was but that it was being carried out by governments in cooperation with one another to circumvent domestic laws that restrict such surveillance on citizens. The main fallout has been heightened concern on privacy—of both individuals and nations. The debates on Internet governance have become intense at a time when the World Wide Web is celebrating its 25th year.

“Snowden is shaping everything that is happening in Internet governance. He has transformed the general public perceptions, and killed forever the feeling of the innocence of the Internet,” says Parminder Jeet Singh, a global crusader for making the Internet more democratic and equitable to all. Singh is executive director of IT for Change, a Benguluru-based NGO that is in special consultative status with UN’s Economic and Social Council.

In the immediate aftermath of the Snowden leaks, there was the likelihood of the Internet losing its global character and breaking up into regional networks. A furious Dilma Rouseff, President of Brazil and one of the heads of state that NSA kept special tabs on, had said Brazil would set up a secure network to circumvent US-based Internet services, in a move to circumvent NSA surveillance of Brazil. In September 2013, Rouseff, who snubbed US President Barack Obama by calling off a state visit, said, “Brazil intends to increase its independent Internet connections with other countries.”

This, according to analysts, would involve the setting up of an independent data centre designed to store locally generated material and keep it safe from spying by NSA. There are also reports that Brazil is building a new underwater fibre optic Internet cable linking the country to Europe, which Rouseff believes, shares its concerns over the need to protect the privacy of its people and government.

According to communications experts, Rouseff was not simply sounding off; alternative infrastructure is already coming up to make this possible. Reports in the European media speak of BRICS cable that is in the final stage of implementation, linking Vladivostock in Russia and Shantou in China, to Fortaleza, Brazil, by way of Chennai, India, and Cape Town, South Africa.

It did seem that regional walled-off networks would be the future of global communications, although at a meeting in Montevideo in October 2013 leaders of a number of organisations involved in coordinating the Internet’s global technical infrastructure had warned against its fragmentation. The statement was signed by the heads of the Internet Corporation for Assigned Names and Numbers (ICANN), the Internet Engineering Task Force, the Internet Architecture Board, the Word Wide Web Consortium and the Internet Society.

All the same in February this year, German Chancellor Angela Merkel announced plans to set up a European communications network walled off from the US. In her first concrete response to widespread indignation in the EU, she said Germany would hold talks with the French government to set up a EU-centred network designed to prevent the mass surveillance by the US and Britain.

However, the sudden announcement on March 15 by the US that it was pulling back from control of Internet may stave off such moves. The US Commerce Department’s National Telecommunications and Information Administration (NTIA) announced that it intends “to transition key Internet domain name functions to the global multi-stakeholder community” by September 2015. As the first step, NTIA is asking ICANN to convene global stakeholders to develop a proposal to transition the current role played by NTIA in the coordination of Internet’s domain name system (DNS).

DNS is the address book of Internet. NTIA’s responsibility includes administering changes to the authoritative root zone file—the database containing the lists of names and addresses of all top-level domains—as well as serving as the historic steward of DNS. NTIA has contracted ICANN to carry out the Internet Assigned Numbers Authority functions and also has an agreement with Verisign under which it performs related root zone management functions.

“This is, indeed, an important step,” says Singh, who concedes it is a step in the right direction. “However, it is equally important to ensure that ICANN (it is based in California) does not remain in US jurisdiction because if it does, then various arms of the US government can still interfere with the root.”

It was perhaps in admission of the current global mood that Assistant Secretary of Commerce for Communications and Information Lawrence E Strickling noted, “The timing is right to start the transition process.” While the US looked forward to ICANN convening “stakeholders across the global Internet community to craft an appropriate transition plan,” he made it clear that “NTIA will not accept a proposal that replaces the NTIA role with a government -led or an inter-governmental organization solution.” As the Commerce Department asked ICANN to plan a handover to an as-yet-undefined group of “stakeholders”, Fadi Chehadé, president and chief executive of ICANN was quoted by US media as saying: “We are inviting governments, the private sector, civil society, and other Internet organisations from the whole world to join us in developing this transition process…All stakeholders deserve a voice in the management and governance of this global resource as equal partners.”

That’s why NETmundial becomes an important gathering because it “represents the beginning of a process”. It will focus on the elaboration of principles of Internet governance and put together a roadmap for future development of this ecosystem. A total of 188 proposals on these two aspects have been received from 42 countries, and the organisers say the São Paulo conference will follow a model of participatory plurality. As such, it brings together representatives of governments, civil society, private sector, academia and the technical community to establish what it calls “strategic guidelines”.

An interesting feature of this participatory model is the hosting of remote hubs in some 30 towns and cities in 20 nations, ranging from China to tiny Trinidad and Tobago. These live hubs will help people to have real time interactions with the event in São Paulo. In India the designated hubs are in Chennai, Gurgaon (Haryana) and Bhimavaram in Andhra Pradesh.

The two-day conference has laid out a three-tier structure for arriving at some kind of consensus. Steering the overall strategy is the High-Level Multistakeholder Committee, composed of ministerial representatives of 12 countries (Argentina, Brazil, France, Ghana, Germany, India, Indonesia, South Africa, South Korea, Tunisia, Turkey and US) and 12 members of the multistakeholder international community. These include representatives of the International Telecommunication Union, the Department of Economic and Social Affairs of the UN and the European Commission. Below this is the Executive Multistakeholder Committee with nine international members, including representatives of technical, civil and academic communities. Its avowed aim is to present balanced representation. Of the 188 submissions made to the executive committee, there is emerging consensus on certain key concerns. The more significant of these is that “the Internet should remain a single, universal, interconnected, interoperable, secure, stable, resilient, sustainable, free, and trusted network,” according to Richard Hill, a Geneva-based campaigner for a just and equitable Internet.

In his analysis of the submissions Hill finds that the predominant theme is that Internet governance should involve all stakeholders from all parts of the world and be open, transparent, accountable and from the bottom up. More interestingly, there is a widespread demand that offline rights apply equally online. But although there is agreement on general, high-level principles, implementation can be open to interpretation. “While there is consensus that free speech must be protected online as well as offline, there is no consensus on whether restrictions that exist in some particular country violate existing human rights laws,” Hill points out. That is among the tough calls that NETmundial will have to take.