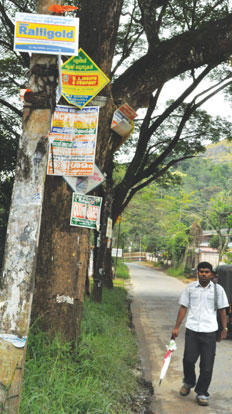 Endosulfan poisoning in Kasaragod district has made the Kerala government cautious in its approach to use of pesticides. Agriculture minister M Retnakaran recently announced that the ban on extremely and moderately hazardous pesticides in Kasaragod will be extended to Idukki district. The news augurs well for Idukki, known for its cardamom and tea plantations.

“We found residues of at least seven pesticides in cardamoms collected from the Cardamom Hill Reserve,” said Muthuswamy Murugan, associate professor at the Cardamom Research Station of Kerala Agriculture University. He was part of the NIAS study team. Levels of highly toxic pesticides like trizophos, quinalphos and endosulfan were high. The Central Insecticides Board advises only two pesticides for cardamom, quinalphos and phenthoate (see Promoting pesticides).

A pesticide monitoring report prepared by the agriculture ministry in 2010 corroborates NIAS study. Cardamom samples from Pampadumpara gram panchayat in Idukki had 25 times the maximum recommended limit of quinalphos. “Persistent organic pollutants like endosulfan are toxic to aquatic ecosystems and pose potential hazard in areas like Kerala that receive heavy rain,” said Murugan. High endosulfan residues in cardamoms imply it is still being used in Kerala despite a 2005 ban in the state. Without a national ban, they will continue to be smuggled in from neighbouring states, he added.

Indiscriminate use of pesticides has contaminated the region’s ecosystem. NIAS study shows Cardamom Hill soil has high levels of a toxic pesticide phorate, DDT, fungicide hexaconzole and mercury. Nitrobenzene is another toxic chemical that is liberally used in the flowering season. It is known to cause cancer, alter genes and affect embryo development. As the volatile chemical remains in the air for long, those residing in plantations get exposed to it.

“The price of cardamom has soared in the past decade—from Rs 300 to Rs 2,000 per kg. This is the reason for such unscrupulous use of inputs and pesticides,” said Prasanth V K, physician at the Pampadumpara public health centre (PHC). “The impact has begun to show.” Hospitals have been registering an increase in cases of chronic poisoning.

Diseases like dermatitis, asthma, cancer and reproductive disorders are common among people living close to plantations, said Prasanth. A study by Kanchiyar gram panchayat PHC shows between 1994 and 2004, about 100 people died in the area of cancer. “An ongoing survey in Pampadumpara shows 50 cases of cancer in 4,000 families. Hardly anyone suffered from cancer in the area till a decade ago,” Prasanth recalled.

J Thomas, director of the Indian Cardamom Research Institute (ICRI) of the Spices Board, said organic cardamom is an alternative but it is not lucrative the initial few years. High labour wages, costly organic fertilisers and cost of certification are major deterrents in making the shift.