Their ecosystem is under threat but no one seems to care 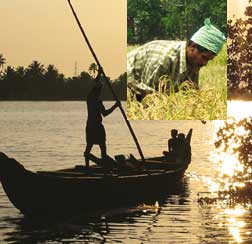 "God's own country is only an advertisement," declares Cherian saar, a retired teacher in Champakulam, Alappuzha district, Kerala, as he gazes at the Pamba river flowing placidly by. All is not well with the trope of the famed Kerala wetlands, adopted by Kerala tourism as its flagship product. Kuttanad, covering four districts, the former rice bowl of Kerala, is sinking under the weight of its contradictions. Even as it pursues its dreams of becoming a tourist haven, there is no proper working definition of this intricate ecosystem's boundaries.

Occasionally a voice or two is heard about them but no one really seems to care. The world outside Kuttanad has made desultory interventions. Three of its large lagoons, Vembanad-Kol, Ashtamudi and Shasthanamkota, have been declared Ramsar sites, wetlands of environmental significance. But in practical terms this has not meant much. Forces hell bent on destroying this fragile eco-system have the upper hand.Engineers and contractors have done the most damage, cheered on by local residents looking for a shortcut to modernity. In the 1970s the prosperous Kuttanad farmer, partaking of the myth of unrestrained progress, jumped into the brave new world of increased productivity. Two crops a year, chemical fertilisers and toxic pesticides were the corrosive foundations of the affluence that never came.

Back then engineers devised answers to problems with more certitude than they do today. Till then the rice bowl, which lies below sea-level, could have only one crop because in the summer months that followed the harvest, saline water from the sea would invade the estuarine network. This was seen as a problem that obstructed optimum productivity of the land. Hence, in 1976 a barrage was built at Thanneermukkom near Vaikom that divided an integral water body into the lower and upper estuarine segments, the former still having its salted months while the latter was deprived of it.

The upper riparian farmer enthusiastically embraced a two-crop regime and pumped in the prescribed quantum of chemical inputs into their fields, and flushed these toxic contaminants into the river system. According to the department of agriculture, Kuttanad uses twice the amount of pesticides per tonne of rice than the rest of the state. With more gusto than good sense, the engineers then built a spillway at Thoatappalli near Allapuzha to regulate water levels and prevent floods. According to Jacob Thomas of St Berchman's College, Changanacherry, who is involved with the institution's community extension programme in Kuttanad, these two engineering interventions had damaging consequences.

Two important ecological, and, economic functions now depended on the whim of government officials. The natural flushing system provided by the floods and the seasonal saline cycle important for the region's agriculture, combined with the toxic effluvium being discharged from the fields, undermined the rice, coconut and fishing economy of the region. The three most lucrative activities of the region have more or less declined. By contrast the economy of the brackish lower riparian still has a reasonably prosperous fish and coconut-based economy.

But engineers are not the only people to blame. The decline in farm incomes and increase in education led to changes in Kuttanad's employment profile. More people took to the service sector, either locally or in nearby towns, or migrated abroad and remitted incomes, bringing down the river-dependence of the economically stronger segments. Consequently, investments on the upkeep of the river system, crucial to the former agrarian economy, went down. Poorer sections who still depend on the ecosystem suffered the most.

Today the surface is still glossy, but there are things the tourists cannot see and do not want to see.Canals away from the main waterways are blocked with hyacinth and those who cling to the old occupations have a tough time of it. Jojo the "egg man" still plies a profitable trade, buying eggs from riverside residents in a barter arrangement that goes far back. In return they take petty household goods from him. The market he can access could have been much larger but he cannot navigate far up the clogged canals.

Clogging and pollution have also made the canals useless for many other purposes. Rosamma Antony, 76, who lives by a choking canal says that piped drinking water has become available only since the past year. Before that, the degraded canal water was used for bathing, washing and drinking after boiling. In happier times, before piped water came, people maintained kitchen ponds and wells for drinking water: these have deteriorated from neglect.

Changing lifestyles have played their part. Consumption patterns have altered and people throw plastics and non-biodegradable waste into the water. The solid waste dumped into the water 15 years ago was organic and therefore did not have the same impact. Another serious problem is the change in the fluvial rhythm. Earlier the river bed was regularly dredged and used as fertiliser or as earthwork for bunds in paddy fields. But with paddy and coconut in decline, the beds are not dredged systematically. The raised river bed has affected flow. With two monsoons a year adding about 3,000mm annually, 38 rivers generously flowing through it, and over 1,500 km of waterways afforded by the lagoon, lakes, estuary, rivers and canals, water that does not flow properly is a serious problem.

A reticulate of ill-conceived roads crisscross and strangulate the waterways. These causeways, including allegedly sophisticated ones like the tarred Allapuzha-Changanacherry road, under constant World Bank-Asian Development Bank funded repair, have no culverts. In drylands this is bad enough. In a wetland below sea-level this is lethal. The financial cost of maintaining the busy a-c road, let alone its ecological cost, seems not to worry its beneficiaries, least of all the contractors, bureaucrats and politicians.

What remains -- the famed houseboats, the boat races, the idyllic waters, the emerald green paddy fields, the carelessly strewn banana plants -- attract tourists who laze on boat decks and survey the tranquil rural scenes. But the fundamental problem still remains to be grasped -- that life here is not meant to be lived as it is done in other places. "Gods own country" is going to the dogs.

Thomas J Mathew is an independent researcher and writer who spends his time between Kathmandu, Delhi and Kuttanad. He can be reached at thomasjmathew@gmail.com