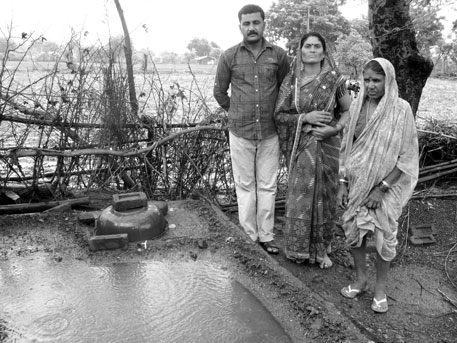 TOILETS ARE not an issue over which one sees agitations every day. And when it comes to women agitating against husbands, it may well be an unprecedented situation. Yet, the women of Amgaon, a tiny village in Wardha district of Maharashtra, did just that. On June 24, they staged a choolband, or no-cooking protest, forcing their partners to not just start constructing toilets but also giving them a taste of the hard work they put in to feed families.

Within three days of agitation, their partners buckled. Construction of toilets has started in 80 per cent of the village, which comprises tribals and other disadvantaged sections. Appreciating the effort, the district administration offered the village subsidy to construct toilets. The cost of constructing workable toilets is much higher than the subsidy, though. The men fear they may not be able to complete the work soon enough to prevent a second agitation which the women threaten to stage.

Amgaon, or a village connected by road in local parlance, boasts a tar road and is hardly 100 metres from the Nagpur-Wardha highway. The road has ushered urbanisation in the village, but it has also taken away the village commons. In the absence of toilets, the only place they are left to squat is this very roadside. “Men and women use the same roadside for defecation,” says SheelabaiChavan, one of the most active protestors. “It is terribly embarrassing.”

Constant movement of vehicles worsens the problem. Women are forced to abruptly stand up while defecating, at times repeatedly. This is not just embarrassing but also causes great physical discomfort. The problem has led to domestic unrest as well. “If a woman cannot find a suitable spot for squatting, or has to stand up repeatedly, it is very likely that she will return home late. The husband, who has already returned home from work tired and hungry, gets irritated waiting. The situation invariably ends up in a quarrel,” says 45-year-old resident Satyabhama Pawar.

Defecating on the roadside is also dangerous. Last year when elderly Leelabai Jadhav went to relieve herself in the night, she slipped and fell. She has permanently damaged her shoulder. Water-borne diseases come last in the women’s list of woes.

Of late, children and the elderly have started frequently suffering from water-borne diseases like diarrhoea. Open defecation is not just the cause of these diseases but also causes untold hardships because patients need to relieve themselves again and again. Fulabai Pawar, an elderly matriarch, says she has been suffering from diarrhoea for the past few days. “It is raining now and it is such a pain to walk up to the road,” she says.

It’s not that men are insensitive to the woes of not having toilets. “It is embarrassing for us, too,” says 30-year-old Vitthal Pawar. “Besides, the tar road has become so dirty that it is a torture to walk on it.” But finding money to construct toilets is a big issue. Most residents of Amgaon are marginal farmers and have a hand-to-mouth economy, says Vitthal. “Last year, all our crops got ruined due to flood and hailstorms. This year there has been a drought. The little money we have goes in educating children, taking care of health and bare survival. Coughing up Rs 30,000 to Rs 35,000 to build a toilet is absolutely impossible,” he says.

Women disagree. “What is the point of getting children admitted to schools if they are sick most of the time and spend their days at home?” asks Sheelabai. “And what about the money spent on treatments?” Often, money is spent on weddings and other social occasions out of sheer social pressure, while necessary expenses like toilets are ignored. 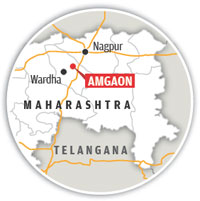 The debate, says Sheelabai, was going on for the last few years, but during last year’s heavy rains there was so much suffering that women began to seriously discuss the problem in self-help groups. “When the discussions reached homes, there were fights in almost all the households,” she says. Men insisted that toilets were not possible without government aid, but the women were not willing to wait. “By April this year, the situation became so tense that there were cases of domestic violence. Some women left their husbands and went away to their parents’ homes.”

The women then approached SudamPawar, activist from farmers’ group Kisan Adhikar Abhiyan. Under his guidance, they gave a five-day ultimatum to the men—start constructing toilets or there would be no cooking at home. The men of Amgaon have agonising memories of the days when their wives were sitting at the agitation venue. “Men entering the kitchen is a taboo here. No one has any idea how to cook. Some do not even know how to chop a brinjal,” says Vitthal. “Our children were also hungry, so the men came together in groups and made desperate attempts to cook after returning home from work,” he says.

The first day the women remained hungry, but by the night food started reaching the agitation venue. “It was horrid. When the food was not raw, it was burnt,” laughs elderly ChaturaChavan. Within three days the men gave up. “We had no option,” says 50-year-old Samadhan Pawar. “We couldn’t eat the food we cooked and our work was getting badly affected.”

No cash to complete work

Women say that the men did not lose a single day to start construction work. The village that did not have even one toilet, now has some 60 toilets at various stages of construction. The district administration has announced a subsidy of Rs 10,000 to construct a toilet. Most people who have started construction have been paid the first installment of Rs 4,600. The subsidy is a grant under the Nirmal Bharat Abhiyan (NBA), says Block Development Officer Shabana Mokashi. Further payment will be made under the Mahatma Gandhi National Rural Employment Guarantee Scheme and will cover the labour cost.

“Usually, the NBA grant is paid only after the toilet seat is constructed and the roof slab is laid,” says Mokashi. “But seeing the enthusiasm of the village, the gram panchayat decided to release the amount early to speed up work,” she says.

Men are sceptical of getting the toilets completed soon. “This is the beginning of the crop season,” says Samadhan Pawar. “We have to meet seed and input expenses. Government aid is enough only to construct a toilet seat. To complete a useful toilet, we will have to shell out at least Rs 25,000 each. We do not have so much money.”

But the women are in no mood to listen now. “It is we who have to suffer the most,” says ChaturaBai. “We have taken beatings from the men to get this work started. We will not allow our effort to go waste. Unless the toilets are completed within a reasonable time, the men had better learn to cook.”