The US beverage giants shell out billions to pop out punch-lines, and repackage Shah Rukh Khan to counter the repackaged Aamir Khan and vice-versa. Many do follow the Khan roadshow and jump on the cold drink bandwagon. But in West Bengal, some other heroes are also beating the heat, sans any forced assertion. Some 'small time' but 'healthy' cold drinks are on the verge of winning the race for stomach share in the state 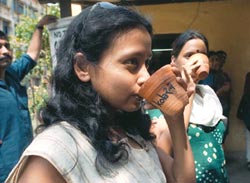 The us beverage giants shell out billions to pop out punch-lines, and repackage Shah Rukh Khan to counter the repackaged Aamir Khan and vice-versa. Many do follow the Khan roadshow and jump on the cold drink bandwagon. But in West Bengal, some other heroes are also beating the heat, sans any forced assertion. Some 'small time' but 'healthy' cold drinks are on the verge of winning the race for stomach share in the state. The credit for countering the ad blitzkrieg goes to a fizzy movement that began as an anti-us protest during the Iraq War.

The movement originated in the campus of Kolkata's Jadavpur University. As soon as the conflict started, the teachers and students geared up to object to what they thought was a crime against humanity. Initially, the academic staff boycotted British and us academic and cultural institutions, diplomats and programmes. However, this was a mere consolation. They wanted to register their disapproval in a discernible manner. Therefore, the academic community decided to boycott us products, and the foremost target of their abhorrence were the readily available Pepsis and Cokes.

But one thing was crystal clear: if an alternative was not provided, the movement may be ephemeral. Thus, along with their students, the teachers rediscovered the magic of some indigenous drinks to give tough competition to the American tradition. "The idea of an alternative drink came from our very own phuchkawalas, who serve phuchkas dipped in tamarind water," reveals Utpal Raychaudhuri, an assistant professor at the department of food technology and bio-chemical engineering, Jadavpur University.

Sajani Mukherjee, an English professor, dug out some of her family's recipes and within a short span, teachers and students of the geology department became gourmets of yummy beverages. Their home kitchens were abuzz while they painstakingly prepared the drinks, and then supplied them to the college canteen. A number of thirst-quenchers, flavoured with an assortment of species such as jowan (camon seeds), were made available. They included lemon juice; tamarind water with a bit of gur; water melon juice; fermented water melon juice; cold drink of crushed mango, tulsi and pudina (mint) leaves; and lassi laced with pudina, tulsi, mango leaves, carrot and spinach.

Soon a kolahol (meaning noise in Bengali) quivered the university's flamboyant summer craze. Served in earthen cups, Kolahols -- the drinks -- became a hot favourite without much effort, and the canteen shelves were hardly adorned by the American 'delights'. The canteen's managers claim that the sale of bottled drinks went down steadily, and about 400 cups of Kolahols were consumed every day. Kolahols' price also worked to their advantage -- a cup costs only Rs five, much less that the cost of Coke or Pepsi.

But for most cost is secondary, considering the payback in terms of health. "Since the drinks consist of pudina, pepper, tejpata (bayleaf) and mango leaves, they are rich in anti-oxidants. These chemicals help prevent diseases, especially cancer, diabetes and heart ailments. They also control ageing, hormonal problems and environmental stress. Kolahols are also a good source of vitamin c and during summer they help maintain the salt levels of our bodies," reveals Raychaudhuri.

As is the case with any novelty, some students and teachers raised the issue of patents. But the idea was said to be inapt. "The formula is simple and doesn't need to be hidden away in some heavily guarded vault. Why should we patent our traditional wisdom?" says Sugata Hazra, a professor at the geology department, who played a key role in bringing about the transformation.

To date, the taste lingers on, despite the battle for supremacy ending nonchalantly months ago. The changeover did not turn out to be just an anti-war fizz. The drinks are now getting cheered beyond the university's horizon. "The new generation was oblivious to the taste of their own culture. Now they know better," says Abhijit Gupta, an English professor. "My 10-year-old son says he likes Kolahols more than Pepsi or Coke. Most of our youngsters have started acknowledging a simple fact -- traditional drinks our non-synthetic, therefore good for health," contends Nilanjana Gupta, another teacher at the English department.


The need of the hour now is a well-planned commercialisation. "It is not possible for us to make the drinks on a large-scale," says Nilanjana Gupta. The teachers had recently urged a shopkeeper from Dhakuria (south Kolkata) to sell drinks similar to Kolahols. The trial proved to be a grand0success. At their behest, a confectionery shop located opposite the university has also started providing juices of lichi, mango and pineapple. On their part, the students are requesting dhaba owners to promote the drinks. "To sustain the change, it's a must to promote the concept of 'ready to serve' (rts) cold drinks," asserts Raychaudhuri.

On an experimental basis, he recently procured a vending machine and tried selling tamarind water of various flavours. The results were mouth-watering. The roaring success induced several entrepreneurs to approach the university for guidance and technical support. One entrepreneur is keen to tempt people with water melon wine with a tang of methi (fenugreek). "A host of such digestive beverages can be offered on a large-scale. The small entrepreneurs can make huge profits by just investing peanuts," says Raychaudhuri.

With the support of the university's fraternity, it is quite an easy task. The university's department of food technology and bio-chemical engineering had organised a workshop at Santiniketan to educate rural units about how to manufacture and market Kolahols. "We can change the mindset in a small region of the country. But that's not enough. Our movement must influence many more, perhaps the entire nation," Raychaudhuri says with conviction. Certainly we soon need to give a punch to what's not good, and what's not ours.