Kuttanad: a case in point

Kuttanad in Malayalam means 'small town'. But the ecological devastation which human hands have wrought here is in no way small or insignificant

Kuttanad: a case in point 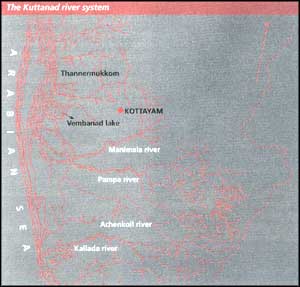 IT TOOK a recent outbreak of an epidemic of Japanese encephalitis with 27 resultant fatalities to focus attention on the widespread environmental degradation in Kuttanad. The Kuttanad basin; in central Kerala extends over 1600 sq km. The region 'is nestled between the foothills of the Western Ghats in the east and the comparatively elevated plains of coastal Alappuzha in the west. Most aggravating among the region's problems is the severe degradation of the aquatic environment mainly caused by human intervention leading to depletion of fisheries resources and health hazards posed to the population.


Kuttanad's monsoons bring with them the perennial problem of floods, engendered by the region's four major rivers. These rivers - the Pampa, the Achenkoil, the Manimala and the Meenachil - drain into the Kuttanad trough, taking a weblike course from Veeyapuram, about 35 km to the south of Alappuzha town. Heading north through the length of Kuttanad, they empty into the Arabian Sea through the Vembanad lake.

The first of the development projects to be implemented in Kuttanad aimed at diverting the flood waters into the sea before they entered the region. The project based on suggestions of the Vaidyanathan commission set up in 1954 involved the construction of a channel from Veeyapuram the confluence of the rivers Achenkoil and Pampa (at the southern end of Kuttanad) to Thottappally, as well as that of a spillway. However the channel and the spillway did not have the desired effect.

Development seems to have upset the applecart here. The numerous roads which have come up in the area act as dams preventing easy drainage of flood waters. Extensive land reclamation in the area has also brought about restricted water-logging in pockets.

Moreover, according to the Kerala pollution control board (KPCB) which was associated in a detailed study of the region's various problems under a three-year Indo-Dutch programme the Kuttanad water balance study project (KWBSP) - a) qut 25,000 tonnes (t) of fertilisers and 500 t of highly toxic pesticides are used in the region's 55,000 ha of paddy fields annually. A considerable portion of this enters the water bodies when the water drains from the fields.

Initiated following the visit of an agricultural identification mission from the Netherlands in 198 1the KWBSP was aimed at studying ways to solve Kuttanad's various problems and evaluate possible solutions to flooding, environmental deterioration and its adverse effects on public health and the problem of poor sanitation. The recommendations of the project included the construction of check dams in the upper reaches of the four rivers as measures to control the floods. The mission also put forward definite proposals for preservation of the region's ecology and development of agriculture and fisheries besides drawing up schemes for housing sanitation and drinking water supply.

According to the study referred to above the use of fertilisers and pesticides was 50 to 75 per cent more in Kuttanad than in other regions. Studies by the KPCB have revealed the presence of DDT and its derivatives, DDE and DDD in water and soil sediments. Organic tissue samples of fish, shrimp and clams, collected from Vembanad lake and examined in the Netherlands, show that levels of pesticides present were as much as 10 times the admissible toxic levels for the respective species. Some of these chemicals are well-known carcinogens.

Alarmingly the project pointed out that more than 40 per cent of the population of the area or nearly five lakh people depend on polluted canals, rivers and lakes for their drinking water. However while the study report was submitted way back in 1989 the state government is yet to sit up and take note of it. There is widespread resentment of this lackadaisical attitude demonstrated by the government. According to experts involved in the study the KWBSP has provided the much-needed database to work outlasting solutions to the complex problems of the region.


This governmental apathy besides the ham-handed development policies intended for the region have been primarily responsible for the outbreak of Japanese encephalitis. The immediate cause - positively identified by researchers led by Jose Thomas, assistant director state health directorate - was the proliferation of mosquitoes mainly the Culex vishnui variety. These were found in large numbers in the affected areas. The basic reason for this pesky proliferation is the uncontrolled growth of water weeds which has a direct bearing on the drastic changes occurring in the region's aquatic environment since the commissioning of the Thannermukkorn saltwater barrier in 1976.

The barrier though it initially helped farmers by preventing seasonal intrusion of saltwater into the backwaters has had a disastrous long-term impact on the ecologyof the region. It has transformed the Vembanad lake into two distinct zones - the upstream area in Kuttanadnow a polluted freshwater body and the downstream section near Kochi which has brackish water. Before the barrier came into being there was no water stagnation in Kuttanad. Even during summer months when there was no flow into Kuttanad from the rivers emptying into the basin the region enjoyed the cleansing impact of the ebb and flow of the sea's tidal action. The salinity in the water also helped check the proliferation of water weeds. Today the stagnant cesspools of the region infested with thick weed growth provide the ideal breeding ground for mosquitoes.

The recent outbreak is reminiscent of various previous ones highlighting the immediate need for ameliorative measures. In 1991a devastating fish disease - ulcerative syndrome - had wiped out a large number of fish in Kuttanad. A series of researches conducted in its wake have pointed out that pesticide pollution was the predisposing factor for the disease. The next year saw an almost similar disease affecting water snakes and tortoises. Following that ducks too died in large numbers because of some mysterious disease. Most of the diseases were in one way or another related to environment and its degradation.