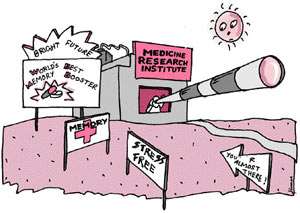 At the height of the dropsy scare, Lucknow-based Industrial Toxicology Research Centre (itrc) came up with a unique device to check for adulteration in mustard oil. Called the colour-detection strip (cd strip), it was promptly placed in the market at a nominal 50 paise with expectations of a deluge of demand. But hopes came crashing down with the product failing to take off.

The 'magic' Memory Plus capsule suffered a similar fate. Developed by the Central Drug Research Institute (cdri) by using bacosides, a Brahmi extract, and marketed by Chennai-based Nivaran Herbal Private Limited, it vanished from the market soon after its mega launch in 1996 by then Prime Minister P V Narasimha Rao. Even the move to rope in chess wizard Viswanathan Anand to promote the product could not do the trick. Located in Lucknow, cdri is a laboratory of the Council of Scientific and Industrial Research.

These aren't a couple of isolated cases. The list of ecofriendly innovations that failed to excite buyers is surprisingly long. "Crores of rupees and hours of perseverance go into each research," says J K Johri, head of the information liaison department, National Botanical Research Institute (nbri). "And at the end of it if all that we get is rejection, it really hurts." So why is it that despite the whole-hearted efforts of scientific institutions, the so-called people-oriented products fail to stir the market? Where does the fault lie? Is it poor marketing strategy? Non-competitive pricing? Or lack of quality control?
In the case of Memory Plus, the product clearly 'did not deliver'. Users claimed that the capsule failed to enhance memory as was touted in its advertisements. Once such complaints started pouring in, cdri -- in a knee-jerk reaction -- cancelled the pact signed with Nivaran and entered into an agreement with another company which is yet to start production. Blaming Nivaran for the debacle, Zaka Imam, head of cdri's liaison department, pointed to the fact that the company violated the memorandum of understanding (mou) and "did not use bacosides as per the prescribed limit". This, added Imam, forced cdri to cancel the agreement. Nivaran, meanwhile, refused to comment on the issue.

In the cd strip case, in which the technology was sold to Nilofe, a unit of Lucknow-based basco, a company employee admitted that production had not commenced because "the results of our market survey showed that people were not interested in this product".

Scientists, on their part, vouch for the fact that such products can change the lives of people -- not only in urban areas but in villages too. They cite the example of itrc's Amrit Kumbh, a water-purification device priced at an affordable Rs 250. According to K K Gupta, itrc's deputy director, "It is a tool to disinfect and purify water. The filter lasts three years or can treat 10,000 litres of water." The simple technology was transferred to two companies -- Lucknow-based Shipra Scientifics and Delhi-based Mathbin Scientific Agency. But both these firms are yet to start manufacturing the product.

Admits Arvind Kumar, business partner in Shipra Scientifics, "We have yet to understand the nitty-gritty of this research. Filtered water starts dripping after a point and itrc has not been able to plug this fault. Frankly, I cannot understand this contraption." Faced with such a scenario, itrc took upon itself to spread the word around. The very first step: live demonstrations of the device at the Kumbh Mela and at rural congregations. Villagers were also made aware of the importance of using clean water. In fact, so charged up were the scientists that they carried this device to inundated villages during floods to drive home their point. Yet again, however, their efforts came a cropper "and Amrit Kumbh failed to impress villagers", rues Gupta.


Another such product was herbal gulal, the technology for which was sold by nbri to Jharkhand-based dm Herbals, a subsidiary of dm Shellac Private Limited. The gulal proved to be simply "too expensive", as pointed out by Abhinav Sharma, a class X student of Lucknow. Priced at Rs 200 per kilogramme (kg), it just couldn't compete with the readily available common gulal that costs merely Rs 50-80 per kg. As per the mou signed between nbri and dm Herbals, the company "will pay a one-time technology cost plus three per cent royalty on the ex-factory production cost".

Another reason why the product failed to take off was the fact that customers didn't know where to purchase it. "We knew that nbri's product was being sold, but were not provided any information about its sales outlets. The whole thing wasn't advertised properly," points out Mahendra Pratap Singh, a real estate agent.

Herbal gulal may have been expensive, but how can one explain low-cost non-starters like nbri's non-alcoholic herbal beer and lipstick? The manufacturing cost of the beer, according to Johri, "is just around Rs 6 per litre and a bottle could be sold in the market for Rs 20". The institute is, however, still looking for prospective buyers.


Scientists aver that the problem is the institutes having no mandate to market their research. "We have no expertise in this field," laments Gupta. "Our forte is to produce, not sell. Moreover, the transfer of technology has not yielded the financial gains that we expected. Consequently, we earn peanuts."

The industry, on the other hand, claims that it is yet to hear about any such "people-oriented" research carried out by scientific institutions. Deputy director of the phd Chamber of Commerce and Industry (phdcci) P K Srivastava hinted as much saying, "We have over 250 industrial houses as our members, but none of them has ever informed us about their inclination to purchase a product developed by a scientific institute."

The reason, according to Srivastava, is that these scientific bodies do not interact with industrial houses. Maybe therein lies the answer to the conundrum. If the industrial and the scientific communities work in tandem, each could benefit from the other's expertise. And the list of the few products that have clicked, such as cdri's non-steroidal contraceptive pill Saheli and second-generation anti-malarial drug Arteether, may grow substantially longer.