Programme to promote breastfeeding improves health of children under two 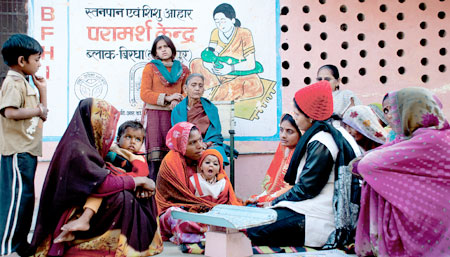 It was a cold January morning. As the mist cleared, groups of women could be seen wending their way to the aanganwadi (kindergarten) in Khitwans village in Lalitpur district’s Birdha block. The women were either pregnant or lactating mothers. Pramilla Jha, a counsellor for infant feeding, was waiting for them.

The women sat in a semi-circle facing Jha as she began explaining the importance of breastfeeding. She told them how to hold the baby to the breast while nursing, a skill all new mothers need to be taught. A doll and an illustrated book were used as aids. “Don’t forget to breastfeed your child within an hour of birth,” said Jha. She emphasised that children should be exclusively breastfed the first six months after which they should be given complementary food with mother’s milk.

She also answered queries of mothers who felt they did not have enough milk because of which their children cry even after they are fed. “Leaving cases of severe malnourishment, enough milk is produced by each woman to breastfeed her child for at least up to two years,” Jha explained. She also demonstrated massage techniques to induce milk release. Others raised queries about deep seated and sore nipples, underweight babies and feeding babies whose mothers work in the fields. After the counselling, the babies were weighed and measured for charting their growth.

Such counselling sessions are being held twice a week in all the six blocks of Lalitpur for the past five years under a programme called Baby Friendly Community Health Initiative (BFCHI).

“We started with Lalitpur because here children’s health was worse than in the rest of Uttar Pradesh,” said K P Kushwaha, the project director and head of the paediatrics department of BRD Medical College of Gorakhpur, which started the initiative in 2006 in association with Lalitpur district authorities and Unicef, Uttar Pradesh.

The project aims to reach every child under two in Lalitpur which has a population of one million. About 30,000 children are born in the district each year. The programme’s benefit is reflected in the registers of counsellors. Data compiled in 2008-2009 showed 84 to 90 per cent mothers received counselling. It also showed significant improvement in all indicators of Infant and Young Child Feeding (IYCF) between 2006 and 2009 (see tables). Exclusive breastfeeding in the first six months jumped from 6.85 per cent to 62 per cent.

The turnaround in Lalitpur is remarkable if one considers the child feeding indicators in the rest of India. India was ranked 25th among 33 developing nations studied by the International Baby Food Action Network (IBFAN), an advocacy group working to reduce infant and child mortality by promoting breastfeeding. It released its report in December 2010.

Thirty-eight per cent new borns in other developing countries start breastfeeding within the first hour of birth; in India this figure is 24 per cent, the report said. What’s more, the number of breastfed infants decreases from 46 per cent to 20 per cent by the time they are six months old. “There is negligible improvement in child feeding practices while bottle feeding has increased,” said Arun Gupta, regional coordinator for Asia of IBFAN. Lack of awareness about breastfeed and aggressive marketing by baby food companies is harming children.

A way to overcome these would be to replicate the Lalitpur initiative. The district is faring better than the rest of the country in child feeding indicators. For instance, in 2006, Lalitpur was way behind the national average for exclusively breastfed children. It has improved remarkably after 2006 (see table).

One of the babies who benefited from the programme is Rakhi of Patsemra village. She weighed 500 g when she was born October 2010. Normal babies weigh at least 2.5 kg at birth, and Rakhi was severely underweight. Her mother, Ramdevi, 18, worried if her first-born would survive. Four months on, Rakhi is an active and alert child, weighs 3 kg and is on the road to recovery.

Rakhi did not get any special nutrition supplement. She was fed only mother’s milk. Ramdevi said she would not have known the importance of breastfeeding had it not been for Kiran Kaushal, an accredited social health activist (ASHA), who visited her daily and advised her how to nurse her child. “Every day she told me breast milk was all my child needed and that she would survive,” Ramdevi recalled.

Kaushal is a member of the mother support group in Patsemra. These groups are the mainstay of BFCHI. Each of the 340 villages in Lalitpur has one such group to educate women on breastfeeding. Each group comprises three members—an ASHA worker, an anganwadi worker and a dai (birth attendant). Together, the support group members in the district number 3,330.They report to their mentors in the block and district counselling centres who supervise the project. Fortyeight graduate women from the six blocks were trained as mentors.

The Lalitpur initiative shows the importance of skilled support group for pregnant and lactating women which is missing in most parts of the country, be it rural or urban area, said Rajni Tomar, consultant nutritionist with Unicef in Lalitpur. According to WHO and Unicef, about 1.7 million of the 26 million children born every year in India, die before age one, mostly from infections like diarrhoea, pneumonia and associated malnutrition. Of them, 1.5 million can be saved with proper breastfeeding and timely complementary feeding.

Tomar said the Lalitpur programme should be replicated in other districts of the country. Though breastfeeding is a part of the National Rural health Mission (NRHM) and the Integrated Child Development Services (ICDS), the workers in these programmes do not have proper training. Just saying breastfeed your baby is not enough, said Praveen Dubey, the project co-ordinator of BFCHI. One of the stated objectives of the project is to scale up optimal child feeding practices through ICDS and NRHM. “But the Centre has no such plan as of now (to replicate the Lalitput project),” said an official of the Ministry of Women and Child Development.

Health activists said women in cities, too, need social support and counselling. Studies reveal children in the middle income group in the cities are the most deprived of mother’s milk. “In the absence of a joint family system, working women find it difficult to manage both office and home. They wean their children early and move to formula feeding,” said Sunita Reddy, assistant professor at the Centre of Social Medicine and Health in Jawaharlal Nehru University in Delhi.

One of the reasons why babies are given top feed early is that many women across social classes feel they don’t have enough milk. “This type of lactation failure is more psychological than real,” said Reddy. Formula feed or cow’s milk should be given only in emergency situations, said Vandana Prasad, national convenor of Public Health Resource Network, a Delhi non-profit.

Doctors said no other milk, formula milk or cow’s milk, can compete with breastfeed. “It is full of nutrients and provides immunity,” said J P Dadhich, a paediatrician and national coordinator of Breastfeeding Promotion Network of India (BPNI), a Delhi non-profit. The milk contains antibodies which help babies fight infection. Such things cannot be added to powdered milk. Besides, the exact composition of mother’s milk is not known, he said.

Another stumbling block in promoting breastfeeding is uneven maternity benefits. The Maternity Benefit Act of 1961 provides for 12 weeks maternity leave for women in the organised sector. Health activists term this inadequate while pointing out Central government employees get six months maternity leave. Women in the informal sector have no maternity benefits. There is no mention of creche facilities in either the National Rural Employment Guarantee Act or the Unorganised workers bill.

A major reason for early weaning of babies is promotion of baby food products. Parliament recognises the need to protect children against commercial influence and enacted the Infant Milk Substitutes, Feeding Bottles and Infant Foods (Regulation of Production, Supply and Distribution) or IMS Act in 1992. It prohibits advertisement of infant milk substitutes such as Lactogen and Nestogen. But companies violate the Act by clandestinely promoting their products through doctors.

Some companies sponsor conferences, though indirectly. For instance, Nestle Nutrition Institute, which claims to be a research and communication body, organises health conferences. This is against the law because the parent body, Nestle, funds these events, said Radha Hola Bhar of BPNI. Recently, PGI Chandigarh called off its annual conference on nutrition in December following media reports on Nestle funding the conference. Nestle leads the Rs 1,500 crore Indian baby food market, with a share of 85 per cent, according to market researcher Motilal Oswal Services.

Another market strategy Nestle has adopted is targeting school girls. The company has signed MoUs with Punjab Agricultural University (PAU) and the Gobind Ballabh Pant University of Agriculture and Technology in Uttar Pradesh to implement a nutrition awareness programme. Neelam Grewal, dean of College of Home Science at PAU, said the programme has so far covered 1,831 adolescent girls in rural schools of Punjab. Success of the programme has laid the foundation for extending it to other states, she said.

Dadhich said Nestle is cleverly using public institutions to “directly reach adolescent girls who are future mothers.” Nestle did not respond to e-mailed queries about it violating the IMS Act.

Though Lalitpur has bucked the national trend, success did not come easy. “It was difficult to convince mothers and mothers-in-law who carried on with old practices and superstitions,” said Sabita, an ASHA activist in Khitwans village.

One such belief is that milk produced in the initial stage, peela doodh or colostrum should be offered to God or mother earth. This milk is high in nutrients and provides immunity to infants. In some areas, women were not allowed to nurse their children the first month because of the belief that mother’s milk is unholy till that time. Children were fed cow’s milk or other lactating mothers nursed them. “Even water (a source of infection) was given to new-born babies,” said Prema Bai, a dai in Birdha block. Now older women encourage their daughters and daughters-in-law to attend counselling.