Landing on the red planet

The world's powers celebrated Christmas 2003 in style: they sent robotic geologists to the red planet Mars, Earth's uninviting and hostile neighbour. Two major space-faring powers, the European Union and the US, extended their race for space supremacy to Mars with their spacecraft landing on the planet within 10 days of each other

Landing on the red planet 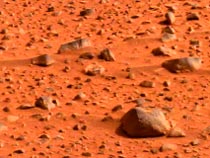 A third mission, Nozomi ("hope") by Japan, failed to make it. Round one to the us.

Why have space super-powers suddenly got interested in Mars? Has the monotonous regularity of failures of Mars ventures in the past fuelled exploratory passions? Since 1960, two-thirds of the Mars flyby and orbiter missions failed. At the height of the Cold War, both the us and the former Soviet Union vied with each other in lunar and Mars missions to explore the possibility of colonising these celestial bodies. Today, no one talks of that agenda. The probes would not only prise open Mars' secrets, but would also snoop around for precious minerals. Thermal emission imaging systems on all three probes are capable of mineral prospecting.

Scientists have made exciting discoveries of relatively recent water-carved gullies, glacier-like flows, regional buried ice and possible snow packs since 1999. Images received from the Mars Global Surveyor and Mars Odyssey missions gave enough evidence on a relatively recent ice age on Mars. From known estimates of the planet's orbit and axis tilt, scientists estimate this ice age might have occurred just 4,00,000 to 2.1 million years ago, quite recent in geological terms.This indicates that Mars is a dynamic planet undergoing climatic changes even more pronounced than on the Earth. Some predictions made from these extreme changes now await reaffirmation by the rovers.

Why this fascination for Mars? Why not Venus or Jupiter? The reason lies simply in the fact that Mars is the most Earth-like planet! Both have 24 hour days, polar ice caps, dust storms, seasonal changes, craters, volcanoes, and temperatures (near) conducive for life. In fact, parts of our planet are still as inhospitable as Mars, especially the Antarctica. Mars may be half the diameter of the Earth, but both planets have the same amount of dry land. The Earth's atmosphere is 77 per cent nitrogen and 21 per cent oxygen. Mars' atmosphere is 95 per cent carbon dioxide. It has four seasons, just like Earth, but each one lasts twice as long.

The current surge of interest in Mars exploration can be attributed to the signals picked up by the 2001 Mars Odyssey mission that water had once existed on the red planet. Besides, last year provided them a golden opportunity to make a shorter and easier voyage as the two planets came, for the first time in the last 60,000 years, closer than ever.

The tasks cut out for the European and us missions were: look for evidence if liquid water ever flowed at the Martian surface and possible, if there were life forms; there will also be a study of minerals. Nozomi, the first-ever Japanese probe, was to be content with measuring Mars's magnetic field and the interaction between the planet's atmosphere and the solar winds of electrically charged particles that streams constantly from the sun's surface.

The Japanese Mars lander, Nozomi, was in fact launched in 1998, but it followed a complicated fuel-saving orbit that sent it around the sun and back to Earth, to be slung towards Mars at the same time as the other missions took off. The need for the fuel-saving orbit was the result of a technical problem early on in the mission (it was originally intended to arrive in 1999). After that, a solar flare damaged the craft's electronics, and its controllers decided on December 9, 2003 that they would not be able to put it into a Martian orbit.

Similarly Beagle 2, a 30-kg craft, detached from mother ship Mars Express on December 19, 2003 but subsequently lost communication links with it. Its controllers are not clear if it has made it to Mars. If it has, then the probe is disturbingly quiet. Their initial efforts involving listening with Mars Odyssey, an American ship already in orbit, and with various earth-bound radio telescopes failed miserably. The mother ship Mars Express even flew over the presumed Beagle's landing site on January 4, giving it an ideal listening position, but failed to pick up signals. esa scientists have not yet lost all hope.

In contrast, Spirit and Opportunity, launched from Cape Canaveral in the us, are state-of-the-art probes. Spirit and Opportunity -- if it successfully lands -- transform themselves into roaming scientific laboratories. Quite like Beagle 2, they have spectrometres, cameras (including one for microscope) and rock grinders. But their key feature, that the European probe does not have, is wheels. If all goes well, each rover will be able to wander the planet at a speed of 100 metres a day for 90 Martian days (a Martian day = 24.5 Earth hours). They will be powered by solar power. Using solar energy, the robotic geologists will be prospecting Mars for its natural history, signs of water and life.

nasa may be emphasising that science is the goal for its interplanatory explorations. But, make no mistake, interests are not necessarily that noble. If so, what stops the major powers (the us, the eu and Japan) collaborating on such extravagant projects, instead of competing with one another?