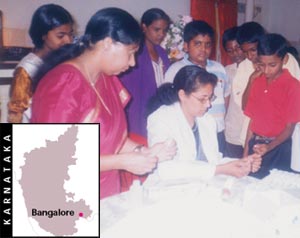 A group of scientists in Bangalore have a dream: to create a district-wise lead map of India, showing areas heavily contaminated with the toxic heavy metal. "The map will pinpoint lead alert zones in a city and inform people about the associated risks so that they can take precautionary measures. It will also help develop a national strategy for prevention and control lead pollution in the country," says Thuppil Venkatesh, director of Bangalore-based National Referral Centre for Lead Poisoning in India (nrclpi), who is leading the project. The dream is already turning into reality: work is already underway in Karnataka, Tamil Nadu and Andhra Pradesh, with nrclpi playing a leading role.

The project began a year back as an enthusiastic idea among a handful of scientists. Initially, only people suspected to be suffering from lead poisoning were screened for blood lead levels. This lead to a question: what were the sources of poisoning? So started the long journey. It was decided that various sources of lead in Bangalore would be mapped. Lead levels were monitored in air, water, soil and human blood. A pattern emerged. Areas with high levels of lead in the environment had people with higher lead levels in blood. In some cases, blood lead levels as high as 75 microgrammes per decilitre (g/dl) were recorded among children living near battery repair shops (the acceptable level is 10 g/dl). Significantly elevated levels of blood lead can damage the heart, kidneys, liver, circulatory system, and central nervous system, leading to death in extreme cases.
The Bangalore-based project is now spreading to other parts of the country. "We have already collected data for five districts of Karnataka -- Mysore, Bangalore, Mangalore, Bellary and Hassan. The state level lead referral centres in Tamil Nadu and Andhra Pradesh are also collecting data in Chennai and Coimbatore, and Secunderabad and Hyderabad respectively," informs Venkatesh. In Karnataka, the Karnataka State Pollution Control Board (kspcb) is working with nrclpi to collect data.

Data is being collected with the help of trained students and teachers. Readings of three seasons -- pre-monsoon, monsoon, and post-monsoon -- are being complied. Collecting data for a season takes about 15 days. Analysis of one sample of blood costs about Rs 350-750 depending upon the methodology and the laboratory used. Blood lead tests are being carried out with support from the us-based esa Inc and the George Foundation. The project team has already applied for a grant to the Indian Council of Medical Research (icmr) so that the project can expand to other states. nrclpi has already written to state governments to set up their own lead poisoning referral centres. Blood lead screening and treatment require some initial investment in setting up laboratories, purchasing equipment and drugs, and training health care providers. The team hopes government will support these activities.

The project team is also involved in raising awareness on lead pollution. To understand the link between environmental lead and human health, about 50 water filters -- which filter out lead from water -- have been distributed to families in Mangalore (these had recorded high blood lead levels). After six months, the blood lead levels will again be monitored to see if there is an improvement. Special bins to collect batteries have also been placed throughout the city. The batteries will be carried to registered recyclers for lead recycling. Awareness is also being raised against lead paints. "As per estimates, in one Ganesha festival, Karnataka sells about 1.2 crore idols. Each two kilogramme idol has about 15 grammes of lead on it as an ingredient of paint. Hence, every year at least 200 tonnes of lead is discharged in water bodies of this state alone," says Venkatesh. "We will hopefully capture all this in the map, which will not only provide information on lead but also lead to a lead-free India."